You sit up. If your many Unabridged Cube drafts have taught you anything, it's the fact that any card that doubles mana production is bad news. You nervously check the life total written on your scorepad.

"I'll tap seven more lands for fourteen mana," Quinn adds, shifting feverishly in her seat. "And that's enough for me to Fireball you for thirteen!" she says, flashing the card in your face.

"Um," you say, staring at your scorepad.

"What?" Quinn asks. "You're at thirteen life. That's exactly enough!"

"I've still got some spare mana," you say.

"Bandage?" you ask, revealing the card sitting in your hand. "That prevents one damage."

Quinn glances at the cards on her side of the table. "Yeah, well," she says. "I should've seen that coming."

"Don't blame me," you say, adding a Heat Shimmer to your hand. "Blame the fact that this thing's got one of each card ever printed. That'll get me down to one, though. I'd say you still have a chance."

"Like you're going to use that Fervent Paincaster to ping yourself."

"I could," you say, tapping the Paincaster, "but I won't. One damage to you?"

You glance at your Flame-Kin War Scout. You weren't expecting it to survive this long, but it's not like you or your opponent have added any new creatures to the table recently. To be fair, considering that you're both playing decks with a fair amount of burn, you're surprised that you've survived this long.

"That's assuming that you're not doing anything else this turn, of course," you say.

"Not unless I can pull a Lightning Bolt out of my face mask," Quinn says. "How do people stand the heat on these things, anyway? But... carry on."

You untap your permanents and add an Ephemerate to your hand. "So, you've got eight untapped creatures and twelve life," you muse.

"And neither of us has anything evasive."

"The suspense is killing me," Quinn says, visibly sweating.

"You can say what you will about being at one life," you note, "but at least it gives me nothing to lose."

"Now you're making me worry."

You chuckle. "That's only if I can figure this out," you say.

It is the start of your first main phase. Defeat Quinn before the beginning of her next combat phase. 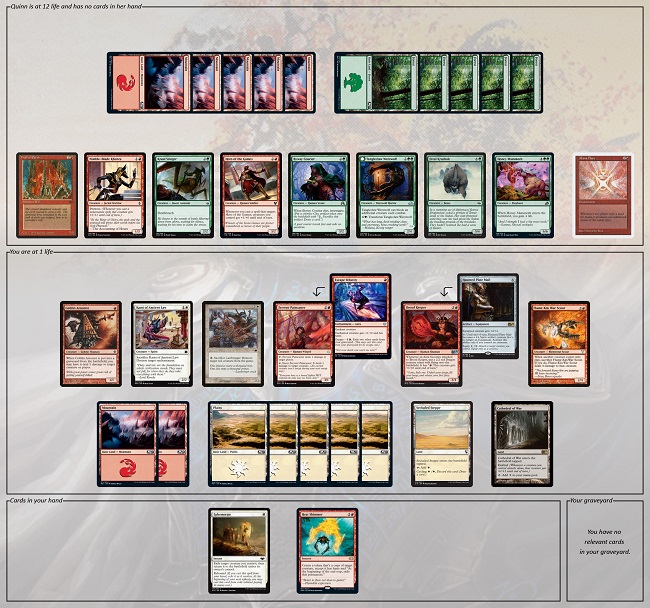 You have currently have no relevant cards in your graveyard.

Quinn is at 12 life and has no cards in her hand. She has the following cards in play:

Instead, if you think you've got a great solution, you can send your solution to puzzles@gatheringmagic.com with the subject line "Puzzle - Crazy from the Heat" by 11:59 P.M. EST on Monday, August 3, 2020. We'll include the best ones in next week's article along with the next puzzle!

"By far," Greg Dreher writes, "the biggest source of damage (well, life loss) you have is Singe-Mind Ogre. Playing Black-Red, you can't bounce your opponent's creatures. But fortunately, you have Grave Scrabbler, one of the few Raise Dead effects that can target an opponent's graveyard."

"Most of the damage to Basil will come from applying Singe-Mind Ogre's ability to Mistform Skyreaver," Jacob Butcher explains. "Accomplishing that requires moving creatures between zones via Unearth, Lava Zombie, and Grave Scrabbler, plus Go for Blood and Plague Witch to kick things off. Once the zone dancing ends, one unblocked flyer will finish Basil off."

From there, the only remaining question lies in exactly how to remove Mistform Skyreaver. But Hyman Rosen's solution covers that, and the rest then falls into place:

Of course, once you've done the deed with Mistform Skyreaver and Singe-Mind Ogre, your opponent will only have one flying blocker at that point. You can then simply attack with both Phyrexian Debaser and Fog of Gnats, then have your opponent choose the creature that deals the killing blow.

"I mean," Michael Feldman writes, "you can sacrifice Phyrexian Debaser to kill Gale Swooper, but why bother?"