Login
0 Item
Advanced Search
Sign In
Create Account
Hongjie thinks for a while. âThis isnât as easy as it looks,â he says.

âNope,â you say. âItâs the Unabridged Cube, what do you expect?â

âOne of each card ever printed? How you do keep from getting headaches during your games?â

âThereâs a first-aid kit behind the counter.â

To be fair, though, youâre the one whoâs been having a hard time this game. Between you and Hongjie, youâve gummed up the board fairly quickly, and youâve largely neutralized each otherâs evasive creatures. The problem is that Hongjie has an additional source of direct damage â Vial Smasher the Fierce â and even if her ability only hits random opponents, youâre the only person sitting across the table at the moment!

âSo thatâs three flyers on my side,â Hongjie muses. âWait, noâ.â.â.â thatâs really only two because my Vampire Nighthawk has zero power. And youâve got that Phantasmal Mount to give one of your creatures flying, and your Demonâs aâ.â.â.â 2/2, is it?â

âYeah,â you say. You managed to get Demon of Death's Gate into playoff a bunch of sacrificed creatures and a fair investment in life, but Hongjieâs Quag Sickness quickly neutered it. Youâd bounce it yourself, but you neither have the creatures nor the life to spare right now.

âI think thatâs too much of a risk to attack with my flyers,â Hongjie concludes. âMaybe I should attack with my Nearheath Stalker, though? If you kill it, it becomes a 5/2â.â.â.â ah, wait, youâve got a Cytoplast Manipulator, so thatâs not going to work either.â

Finally, your opponent shrugs. âIâm not even going to try and figure it out,â he says. âIâll just cast a Sengir Nosferatu and pass the turn over to you. Take five damage from Vial Smasher?â

âIâm down to two life, then,â you say, adjusting your life counter. âAre you sure about passing?â

âIâm not in the mood for a headache just yet,â Hongjie says, smiling. âBesides, my flyers will probably bring it home next turn.â

You untap and are about to draw a card when you realize that you havenât resolved your Skull Collectorâs ability yet. Itâs just as well: Youâre looking over your creatures when the notion hits you, and you start seriously considering your board state.

Hongjie notices your shift in expression. âWhat, are you going to topdeck something and pull a win out of nowhere?â he asks.

You tap your fingers on the table. âNo,â you eventually admit. âBut thatâs only because I donât think I need my next draw at all.â

It is the beginning of your upkeep phase. Youâve just put Skull Collectorâs ability on the stack, and you may still cast spells or activate abilities in response.Defeat Hongjie before the beginning of his next combat phase. 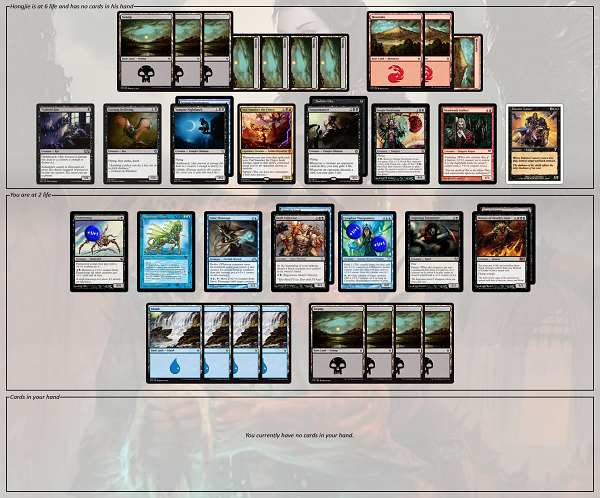 You currently have no cards in your hand. You do not know the identities of the next cards on top of your library.

Hongjie is at 6 life and has no cards in his hand. He has the following cards in play:

You do not know the identities of the next cards on top of Hongjieâs library.

If you think youâve got a great solution in mind, donât put it in the comments! Instead, send it to puzzles@gatheringmagic.com with the subject line âPuzzle â Counterpunchâ by 11:59 P.M. EST on Sunday, November20, 2016. Weâll include the best ones in next weekâs article along with the next puzzle!

âSo, we're in a situation here,â Alex van der Bie writes.âWe're at 3 life and we can't really prevent our Charging Cinderhorn from dealing damage to us.We have Deathgreeter to gain life, but we'll have to gain a lot of life to somehow survive this turn, let alone actually win the game.

âWe have three different sources of damage, adding up to exactly 12:

âThis would, however, also deal damage to yourself (11 damage, to be exact). This means we'll have to gain at least 9 life this turn, using just the Deathgreeter. We'll also have to take care not to die during our opponent's next combat phase.â

The trick is to realize that you donât have to gain the 9 life all at once. Assuming that you can survive reanimating and activating Bloodfire Colossus, it should take care of the rest of the Deathgreeter triggers for you. David Windrich writes:

You could, of course, regenerate the Wildebeests first and then your Cinderhorn â this order doesnât matter as long as both of these creatures survive. Note that even if Stampeding Wildebeests bounces itself on Camâs upkeep (putting Soul Bleed into your graveyard), the Bleedâs ability will still trigger and resolve separately.

âThe sequencing here is pretty hard,â Alex clarifies.âWe have to wait for our opponent's upkeep for the Soul Bleed, but in order to survive the Cinderhorn damage, we have to sacrifice the Colossus first. We can gain enough life by sacrificing the Colossus during our own turn, but we might end up removing the Soul Bleed in the process.â

The final use of Diabolic Servitude is also necessary because Cam still has an extra draw phase with which to kill you (or at least draw an obstacle to your line of play). If you can topdeck your way out of a situation, then thereâs also the possibility that she can do that, too!

âCam could potentially draw a Path to Exile or any removal spell,â Dominic Chan adds,âor she could even draw a Hornet Sting to take us out! So we need to secure our win with Chittering Rats.â