"I know, right?" Octavia beams. "It's not as much as I would have made on events and conventions, but it was comfortable."

"Well, it's not like we have a lot of those at the moment."

"You'd be surprised, but a lot of them have gone online. And I have to give these fingers a rest sooner or later, so I'm not looking at a career change just yet," she laughs.

Octavia is, as always, dressed impeccably: She's gone for a white blouse with billowing sleeves today, and matched that with some slim-fit jeans (as well as a mask made out of some expensive-looking material). It strikes you that this is the most 'normal' you've seen her look, although she still gives the impression that she's just stepped out of a magazine.

Not that that matters much, though. Your primary concern right now is that she's beating up on you with a significant board advantage, and you have to put all your effort into not losing this game.

You're currently in the third game of your match, and Octavia's deck is a good example of what to expect when you go Red-White in the Unabridged Cube: A lot of fast ground creatures, topped up with several sizeable flyers and the occasional instant-speed trick. It's been a lot for you to handle, especially since your Blue-Black deck isn't really up to scratch. But all in all, it's just another day working with one of each card ever printed.

You check your scorepad. "I'm at seven life," you say.

"Well... you do have a blocker," Octavia points out.

"Yeah, but it's my only flyer," you say, glancing at your Aven Reedstalker. "Even if it is a 4/4 with that Relic Axe."

"That does look like a difficult choice," she admits.

"But I take it that you have a preference."

Octavia thinks for a while. "Speaking professionally," she says, "I'd block. I wouldn't want to go down as far as three life, and I'd still have the Relic Axe - there's always the chance to draw another flyer."

"Point taken," you say, sliding the Reedstalker forward. "I'll block your Angel, then."

You pause for a moment, and then shake your head as Octavia laughs. "I can't help but think that you just played me there," you remark.

"You asked me for my opinion," she says simply, "and then you walked into it anyway. Take two trample damage?"

You sigh and write down your new life total. You only hope that Octavia doesn't see the ace up your sleeve coming.

"Do you get a token from Sifter of Skulls?"

"Yes I do. Thanks for reminding me," you say, digging for a random advertisement card from your deck box.

"I'll tap my last four lands and sacrifice my Eldrazi Scion token for five total. Desertion on your Lathliss?"

You've been saving the Desertion ever since you drew it a few turns ago, and this is probably your crowning moment. For a few seconds, you feel as though you're finally turning the tide.

Then Octavia manages to completely deflate you in the span of two words. "Mana Tithe?" she asks.

"You don't have one extra mana, right?"

One glance at your board tells you all you need to know. "Nope," you say, dropping the Desertion dejectedly into your graveyard.

"If it makes you feel better," Octavia says in a sympathetic tone, "I was serious about the possibility of you drawing another flying creature."

You sigh. "I'll hold you to that," you say, "but now that draw has to be something that can matchup to a 6/6 dragon."

You'd be lying if you said you weren't hoping for something spectacular on the top of your deck. But after you untap your permanents and take your draw, you realize that you have to settle for mediocre removal: a Spatial Contortion isn't quite what you had in mind.

Octavia seems to be studying the expression on your face. You're pretty sure you've run the range of the entire emotional spectrum in the span of thirty seconds, so there's no use hiding your disappointment right now.

What Octavia doesn't see, though, is your puzzlement at your draw. You're fairly certain that you can find a way for the Spatial Contortion to gain you back an advantage, but you're not sure how. 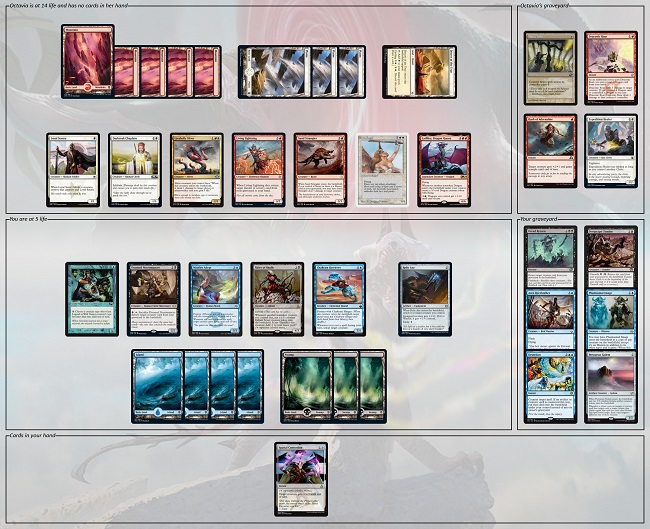 Octavia is at 14 life and has no cards in her hand. She has the following cards in play:

Octavia has the following cards in her graveyard:

Instead, if you think you've got a great solution, you can send your solution to puzzles@gatheringmagic.com with the subject line "Puzzle - Every Which Way" by 11:59 P.M. EST on Monday, November 23, 2020. We'll include the best ones in next week's article along with the next puzzle!

"The approach to this puzzle seems 'obvious' to the experienced solver," Hyman Rosen notes. "Given what we see, we're clearly going to want to:

"Unfortunately, we're somewhat short on mana. More importantly, if we use Plague Reaver to kill Banisher Priest and Cavalier of Dawn at the same time, the triggers will go on the stack in the wrong order for us, and we won't have Indomitable Will before Scab-Clan Giant resolves."

Killing Cavalier of Dawn will certainly put Indomitable Will into your graveyard early enough that your Cavalier's ability can retrieve it. However, Hyman's analysis hits the nail squarely on the head: Assuming you've got Scab-Clan Giant exiled by Banisher Priest, the problem with the Priest and the Cavalier simultaneously dying to Plague Reaver means that the following two abilities trigger at about the same time:

These triggers go onto the stack in Active Player / Non-Active Player order, which means that Scab-Clan Giant's ability goes onto the stack last, and resolves first. By the time it fights a random creature you control, you wouldn't have gotten back your Indomitable Will yet!

"This is a pretty conundrum," Hyman adds, "but while it seemed that combat would be useless in this scenario, it gives us what we need."

Although you don't have any creatures big enough to take down your opponent by themselves, your Cavalier of Dawn does come close as a 5/8. And coincidentally enough, as Max Bernstein writes, you have an instant spell that can give that last point of power: