"Attack with my Territorial Allosaurus," Argus says, watching you closely.

You nod. The truth is, you're not really looking at his dinosaur: It's got a Whispersilk Cloak on it, and you don't have any artifact removal, so it's not like you can do anything apart from try to race the five damage as best as you can. You're more interested in what Argus is doing, and he's giving you a very even look right now.

"And you held her back," you point out. "Read Goreclaw again - her ability only triggers whenever she attacks."

Argus' eyes flick over to his Goreclaw. Then he looks at you and smiles, as though you've passed some sort of test. You're pretty sure he knows exactly what Goreclaw does, so that doesn't bode well for the rest of your match - and you have enough problems on your plate that don't already involve watching your opponent.

You scribble down your new life total anyway. You actually have the upper hand in terms of evasive creatures: Your Ringskipper makes for a fair blocker, and your Atemsis, All-Seeing matches the Allosaurus in terms of size. The problem is that Argus has more creatures than you do, and considering your life total, you've had to hold most of your forces back for blocker duty.

"I'll cast a Flight of Equenauts to empty my hand," Argus says.

You pause, looking at his Equenauts. At 4/5, it's not big enough to take down your enchanted Atemsis, but it doesn't have to do that. Argus, after all, just needs to stay alive long enough for his Allosaurus to seal the deal. That means that he can block however he likes, as long as his cloaked dinosaur can still move around.

"I'm paying eight, of course," Argus says. You can almost hear the sardonic tone in his voice.

"You're not convoking?" you ask.

"No need to," Argus says, spreading his hands in a gesture of openness. "You know perfectly well that I need all the blockers I have."

It's telling that the Unabridged Cube would give you a really nice card pool today, only for a creature-heavy opponent to spoil your plans. The fact that Argus isn't winning any points in the honesty circuit doesn't make you feel much better: He'd probably pull out four copies of Loxodon Smiter if you didn't know the Cube had only one of each card ever printed.

"Are you doing anything else?"

Argus smirks. "Does it look like I can do anything else?" he asks.

"If it makes you feel better," Argus says. "Okay, I'll end my turn. Do you have any responses?"

"I do," you say, even though you're not quite sure.

Argus has just declared the end of his turn; you may still cast spells or activate abilities in response. Defeat Argus before the beginning of his next combat phase. 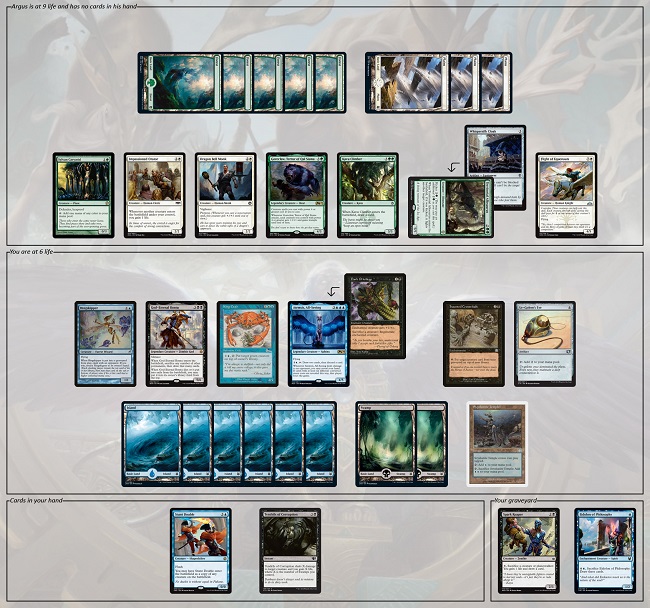 Argus is at 9 life and has no cards in his hand. He has the following cards in play:

Instead, if you think you've got a great solution, you can send your solution to puzzles@gatheringmagic.com with the subject line "Puzzle - You Ain't Seen Nothing Yet" by 11:59 P.M. EST on Monday, November 30, 2020. We'll include the best ones in next week's article along with the next puzzle!

"This is a hard one because of the many options available," Hyman Rosen notes, "and because there turn out to be a ton of triggers to deal with during the execution.

"One thing to note is that the spell-copying ability of Precursor Golem makes the copies on resolution and looks for the other Golems then, and not when the trigger first goes on the stack. That turns out to be important to the solution."

"Graveyard searches and mimic effects are both notorious for presenting mazes of options," Michael Feldman observes. "Your choices for the graveyard search, however, are pretty easy to figure out. After all, you get two picks via Doomed Necromancer and Dread Return (plus Dregscape Zombie's unearth, which doesn't seem all that useful, but...). It's clear Aven Reedstalker won't do you much good, which leaves you to figure out what to do with Phantasmal Image and Precursor Golem.

"It shouldn't take long to see Precursor Golem's combo with Imagecrafter and Spatial Contortion, but Phantasmal Image is less obvious:

"But the only copy you can't solve the puzzle without is Living Lightning: Unless you can pull off a second Spatial Contortion, Lathliss isn't going anywhere, and you probably aren't going to have more than two flying creatures (unless you copy Mistfire Adept, in which case you're missing either Precursor Golem or any way of taking out either of Octavia's flying creatures)."

Now that you have the vague idea that Phantasmal Image should be walking around as a copy of Living Lightning - and that the copy should give you a second shot at Spatial Contortion - there's the question of what sequence to follow. Jacob Butcher's solution neatly outlines this below:

Notably, sacrificing an unearthed Dregscape Zombie won't trigger Sifter of Skulls, because the Zombie gets exiled instead of going to your graveyard. However, counting the last Eldrazi Scion token, you do still have enough remaining mana sources to equip Relic Axe to one of your attackers for an extra 1 damage.

Ironically, the Sand Strangler on Octavia's side might also have been a contender for Phantasmal Image here, if only you had the right lands in your deck. Unfortunately, technicalities don't count here, for as Jacob muses: "Does having Desertion in my graveyard count as having a Desert?"