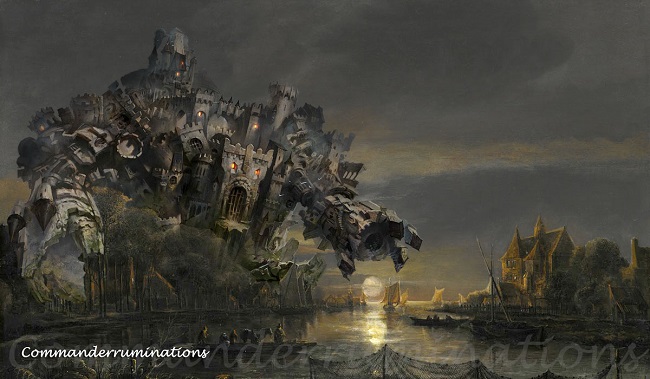 I've long been a fan of Devotion but I haven't played with it in Commander nearly as much as I would like. Devotion is an ability that cares about the number of symbols of a particular color in the casting costs of permanents you control on the battlefield. Cards that care about devotion vary in power level a great deal and have to be built around in order to have much of an impact.

In Theros: Beyond Death we're going to see Gary again along with a fresh new set of cards that care about devotion. Five of those cards are new Legendary Enchantment creatures with the Demigod creature type. They all share one thing in common - they have power equal to your devotion to their color. Today's column is going to be a look at the Mono-Green Demigod from Theros: Beyond Death - Renata, Called to the Hunt.

Renata's power will be at least 2 and her toughness is 3, so she'd be a bit overcosted if she didn't grow in power in accordance with your devotion to Green. Fortunately, she can and she probably will hit the table as a 5/3 or bigger depending upon what your board looks like.

Renata also gives each other creature you control a +1/+1 counter when they enter the battlefield. That ability is central to my Grumgully, the Generous deck's Persist combo strategy. In a Renata list those +1/+1 counters are more likely to represent incremental value than be a cog in a game-ending Rube Goldberg device. You could build around Aerie Ouphes and Woodfall Primus with a sacrifice outlet and a payoff of Greater Good, but I've already got a deck that's playing that game - I don't need two.

If Renata can give our creatures +1/+1 counters we'd be foolish to not make the most out of those gifts. There are a few creatures we can include that might appreciate that extra +1/+1 counter. I might not wind up including all of the cards I show you in today's deck, but they're worth looking at and discussing.

There are set of four Phantom creatures - Phantom Centaur, Phantom Nantuko, Phantom Tiger, and Phantom Wurm - which all enter the battlefield with +1/+1 counters. They all have the ability that when damage would be done to them you prevent that damage and remove a +1/+1 counter. While none of them represent potent offensive threats, they can block certain attackers really well. Since their ability prevents deathtouch they can stand up to a few hits from a deathtouch attacker before their +1/+1 counters and their luck runs out. A trampling attacker would assign enough damage to kill the Phantom creature and the rest would carry over, but the damage to the creature would be prevented and a +1/+1 counter would be removed.

Most Magic cards have a casting cost that includes one or two mana that have to be in specific colors and the rest of the mana can be any color you like. For a deck where we're trying to get as much devotion as possible, we want to do two basic things. All things being equal, we'll want to play creatures with lots of mana symbols in their casting costs so we can maximize our devotion. We also want to play non-token permanents over non-permanents and token generators, as we gain value for having permanents with those precious mana symbols on the field.

The three ramp options shown below are not created equal, though they do all have the same converted mana cost. For decks that don't have access to Green, a mana rock like Mind Stone represents valuable ramp and some utility in the form of card draw later on. Most decks that are in Green would prefer to just put an extra land into play with a card like Rampant Growth. Lands are relatively safe from being destroyed or exiled by our opponents.

In a deck that cares about devotion to Green an aura like Fertile Ground will give us extra mana but it's more fragile than just tutoring up another forest. We've got to either care about enchantments or care about devotion to plan a ramp package around enchanting our lands. Since we do care about those little bits of broccoli, we're going to try running Fertile Ground, Wild Growth, Urban Utopia, Sheltered Aerie, Overgrowth, and auras like that for today's ramp package.

Putting lots of those little forest symbols onto the field is going to be a big part of a Renata deck's plan. As luck would have it there are plenty of cards in Magic with fairly ridiculous amounts of Green "pips" on them.

I'm not certain that every card with a heavy Green casting cost will be worth including in today's list but it is definitely fun to look at what our options are.

Khalni Hydra costs eight Green mana, but will cost one Green mana less for every Green creature we control. Even if we play it for free, our devotion will go up by eight and Renata, Called to the Hunt will get eight more power. I don't know how often we'll be able to "one-shot" an opponent, but that is the kind of boost that makes a commander damage kill seem like a real possibility.

Primalcrux only costs six Green mana, but it has a power and toughness equal to our devotion to Green so it could be a real threat if we've made it to the mid or late game without running into any board wipes. Rushwood Elemental costs five Green Mana and gains a +1/+1 counter on our upkeep. All three of these big boys have trample and if they were all on the field with Renata, she would be a 21 power threat.

Creatures with five or more mana symbols are few and far between. Devotion is so important for this deck's plan that I'm even considering including the vanilla 10/10 Gigantosaurus, though I usually shy away from creatures that only bring flavor text and stats to the fight.

Weighing in at four devotion, Cloudthresher and Feasting Troll King both bring good-sized bodies to the fight. The former will do 2 damage to each creature and each flyer when it hits the field and it has Flash and Reach. The latter has Vigilance and Trample and creates 3 food tokens, which can be used to bring him back to the battlefield from the graveyard later on.

There are lots of interesting creatures with three Green mana symbols in their casting costs. Vigor, Regal Force, Jugan, the Rising Star, Hornet Queen, Vorapede, Llanowar Tribe, Yorvo, Lord of Garenbrig, and even Unyaro Bees are of interest, but my spotlight has to shine on the brand new Nyxbloom Ancient. These big creatures cost big mana and Nyxbloom Ancient will triple your mana production if you can manage to keep it around and on your side of the battlefield.

We want to lean toward favoring permanents over instants and sorceries to try to maximize our devotion as quickly as possible, so it's worth looking at what enchantments will help us out the most.

One of the enchantments shown below is something of a trap. Can you guess which one is a terrible idea to include in our deck?

Mythic Proportions gives us three bits of broccoli and +8/+8 and trample, but on Renata that devotion boost really means +11/+8 and trample. Hidden Path is an enchantment that will give Green creatures forestwalk, allowing us to swing freely on anyone who has a forest. Ayula's Influence will give us three pips and will let us discard a land card to create a 2/2 Green Bear creature token.

At first glance they might seem like they are all great includes. Our commander might be able to one-shot an opponent, our creatures will have forestwalk, and even if discarding lands sounds like a bad idea there may be times when we're in dire need of a blocker.

The "trap" card is Hidden Path. We'll have lots of Green creatures, but we'll also have lots of forests. This enchantment affects everyone's creatures. The last thing we want is to have a Zacama, Primal Calamity, Gishath, Sun's Avatar, or Ghalta, Primal Hunger (or all three of them) bearing down upon us without any way to block.

There are two planeswalkers that give us three Green mana symbols. With Renata on the field Garruk's -3 loyalty ability should draw us a ton of cards. Vivien, Arkbow Ranger's abilities also play well with Renata. She'll be happy to get a couple of +1/+1 counters. She'll also be happy to have trample for a turn though she'd be even happier to simply be unblockable.

We're going to try to play as many cards with only Green mana symbols in their casting costs as possible and we're going to lean toward running permanents over running non-permanents. I'm still not sure how much pop a casual deck like this is going to have, but let's take a look what I wound up with for my first draft.

I've got a Primal Surge in there, but am also running a handful of other instants and sorceries so I'll never know how many permanents I get. Maybe I'm weird, but I like surprises so I enjoy that kind of dynamic when playing a powerful Magic card. There are a few ways to draw cards equal to Renata's power and Fungal Sprouting - a card that will create 1/1 Saprolings equal to her power. This is definitely one of those decks where you build your board and hope for the best but I'm usually able to enjoy those kinds of decks. Not everyone can - some players have to have a very clear path to victory in every deck they build.

So what do you think? Did I miss any obvious includes? Am I crazy to not throw Nyx Lotus into my first draft? Should Aspect of Hydra and Craterhoof Behemoth be in as well?

I don't know for sure if I'll wind up building and playing this deck in paper, but I've got a Questing Beast turbo fog deck that I've just started playing and I could see myself converting that list over to Renata, Called to the Hunt eventually just to try it out.

With Theros: Beyond Death about to come out I find myself wondering if there is any interest among my more regular readers in another "deck-in-a-box" column.

I've felt like my results with those builds have been somewhat mixed and what I don't know is whether or not any of you enjoyed reading about those experiments. If you have an opinion, please let me know. Without an obvious 5/c commander in this set, I'm a bit wary of going down that path this time around, but I would do it if my readers wanted me to.