The cold air envelops you as you step away from the fire. You have yet to leave the gathering hall, but you are already cold. You allow yourself one last gaze at the flames and those huddled near it before steeling yourself and walking out the door. The cold only seeps deeper into your skin once you leave.

It doesn't matter how many cloaks or undergarments you wearâyou know you would still be cold. While they protect you from the wind and gusts that inevitably make it within the monastery's walls, you feel naked against the cold. The only area where you are able to find respite is by the fire.

You suddenly realize that the thought is not entirely true. There is one other place you have found heat in the monasteryâIssar Roon's study. Your mind wonders how anyone could survive winter in the northlands as you hurry toward the library wing.

The old man gestures to the rug on the floor with a kind smile on his face. For a moment, you see a friendly elder looking for company in place of the stiff, hard-edged old man before you. The image is fleeting, and the thought is gone before you sit.

I was going to leave the rest of Tezzeret's tale for another day, but I am afraid you may need to know it sooner than I had hoped. There is naught this old bag of bones can do but educate you with the necessary knowledge. 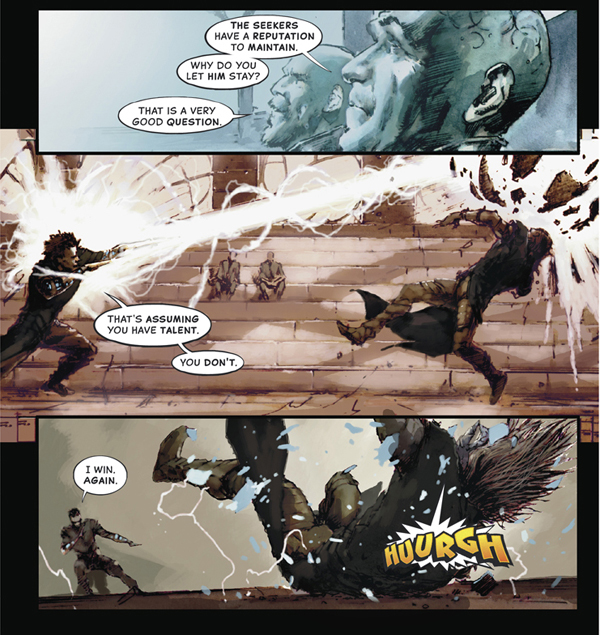 One word can describe Tezzeret quite nicely: ambition. He is utterly obsessed with attaining a superior position of power and prestige so that he may never be subdued or controlled by another for the rest of his life. Sadly, his pursuit has only led him to even stranger and more complex submissions.

Tezzeret's childhood experiences of poverty and capitulation left him scarred. At first, his desire for power was mixed with pure curiosity. He was interested in the things he studied, and he exuded a childlike delight when he discovered new spells, abilities, and contraptions on his own. Slowly, as he gained knowledge and strengthâand became removed from Tidehollow and his childhoodâTezzeret lost that curiosity and wanted even more power solely for selfish reasons. The day his mother died has never been far in his mind.

Tezzeret's darker side began to reveal itself when he entered the Academy of the Seekers. He had begun feeling that he deserved to be there, and he started to take his position for granted. When he was humiliated and displayed as a fraud by fellow student Silas Renn, Tezzeret was on the verge of being dismissed from the Academy. Though he did not realize his mistake yet, Tezzeret was still able to take control of the situation by secretly murdering his headmaster, Amalet Pannex.

For a few years, Tezzeret's ambition lay dormant. He was satisfied learning new skills at the Academy and did little to upset his situation. He did, however, manage to vex his superiors with unwanted questions. Then, his graduation arrived.

Though Tezzeret graduated from the most prestigious of schools on Esper, he was still treated as a boy from Tidehollow. His peers did not respect him, and his superiors did little to aid him beyond their obligatory lessons. When Silas Renn was granted a new etherium heart to go with his etherium body, Tezzeret had had enough. He no longer revered or respected the Seekers of Carmot. He had grown suspicious of them and questioned why they would not help others with their secrets of forging new etherium.

Tezzeret's ambition had returned, and he wanted the secrets of etherium for himself. He snuck into the inner sanctum to read the Codex Etherium. When he arrived, Tezzeret was surprised to find the pages of the Codex blank, and no hint of etherium's secrets could be found. He had little time to contemplate the implications, however, as he was immediately set upon by multiple guards.

The guards who found Tezzeret with the Codex did not attempt to take him prisoner or lock him away. The Seekers were tired of the âboy from Tidehollow.â Instead, the guards brutally beat Tezzeret and strived to kill him. He was saved only by his spark.

When the guards struck the final blow, Tezzeret's spark triggered, and his life as a planeswalker began.

As with almost every ascension, Tezzeret planeswalked wildly, finally landing on Grixis. There, he met the elder dragon, Nicol Bolas, and the cycle of his ambition began anew.

There is no need to go into detail of all of Tezzeret's activities since his ascension, but I must emphasize his character. After meeting Bolas, Tezzeret began a new phase of ambition. No longer tied to a plane, and aware of even more power available across the Multiverse, he did not hesitate in seeking it. This time, Tezzeret accepted his submission to Bolas as inevitable, but he immediately began planning a way free.

Tezzeret gladly learned from the elder dragon, but slipped free of his power as soon as the possibility presented itself. The first time, it took the form of a coup over Bolas' Infinite Consortium. Bolas was not unhappy about this turn of events and seemingly allowed it. Some have speculated that it was part of his schemes from the start.

However, I admit to not understanding the elder dragon's mind. He, along with Urza, is among the few planeswalkers I have never fully understood. His goals are easy enough to imagine, but they often only become clear after they are complete. Sometimes, they never do.

Ah, there I go, getting sidetracked. I apologize for letting my mind wander.

Intrigued by his story, you merely shrug in response, hoping he will continue quickly.

Later, Tezzeret came up against Jace Beleren. Once defeated, he was forced to rely on Nicol Bolas once again. This time, Bolas made the submission even stronger. Tezzeret plotted and schemed against the elder dragon, but he could not gain freedom.

The last I heard, the artificer was on Mirrodin, once again acting in the role of an underlingâthis time to the Phyrexians. I have not heard from the plane since Karn left, but I imagine Tezzeret is devising some form of treachery that will result in even more power. I shudder to think of the possibilities when Phyrexians are involved.

That is all I have to say on the matter of Tezzeret. The details of his plots and schemes are of little consequence. Using this knowledge is up to you. I hope you choose to do so when the time comes.

Confused as to why the old man once again thinks you are a part of this Multiverse, you only look on silently. After a moment or two, the old man turns back to his books and forgets your presence. You stand up to go, and you almost reach the door before remembering the cold that awaits you beyond.