I was walking into the office the other day when I saw a couple of the interns sitting around a table, playing cards. Strolling over to them, I asked what card game they were playing, thinking I could get a game of Hearts or something before I went to my production meeting. They responded, âMagic.â I politely asked them to perform a magic trick for me. After all, I used to know some card tricks when I was younger, but, of course, time and age has made fools of us all. Plus, I donât think I can shuffle like that anymore. My hands are filled with arthritis. It makes it hard to open bottles sometimes, which I find to be quite ironic when itâs my arthritis medicine that needs opening. Why do they put child proof caps on arthritis bottles anyway? Itâs not like I see three-year-olds with bad joints, or seventy-year-olds with three-year-old kids.

Anyway, they said that it wasnât a deck of magic cards but a game called Magic. Thinking it was game invented by David Copperfield or that guy who holds his breath underwater, I wanted to know more. One of them handed me one of their cards. It was in a plastic casing, apparently to ensure the card keeps its value and reduce the wear and tear. I had never had these types of things when I was playing Bridge with my regular old Bicycle cards; maybe that explains why I had to buy a new deck every few years. My wife always joked that I shuffled the cards too hard and said I was going to wear the spots out; that may explain my arthritis. But I wonder if you can shuffle the spots off a card. Maybe those guys who do that show with all of the explosions can to that sometime. Though I donât know if Iâd like to see them continually shuffling cards for an hour; seems like a waste of a perfectly good deck. Maybe they can play a game of Canasta in between shuffling.

I looked at this âMagicâ card and it had a picture of a dragon on it. There were lines of text, which I assumed were relating to the game. The border of the card was a red-ish color. They told me there were five colors, Blue, Black, Green, Red and White, and that they all battled each other. Apparently the company that made this game couldnât get the rights to use Clubs, Diamonds, Hearts, and Spades and also added a fifth suit as well. I donât know what I would include if cards were to add a fifth suit, Iâm thinking a rabbitâs foot since all of the other symbols are so lucky. Well, maybe except for the Spade, where itâs really just a shovel.

I was told that you summon these creatures to attack your opponents and cast spells to take your opponentâs life total from 20 to 0. Sounds pretty violent to me; I bet it stems from those video games thoseÂ  darn kids play today. No other card game I know goes like that, beating each other until the one player is dead. In Hearts you want to have as few points as possible, not start from 100 and fall to 0. Though, I guess darts whittles down points, but I donât think sharp flying needles sounds as dangerous as those dragons these kids were showing me. I wonder if thereâs a PETA-like group trying to save those fanciful creatures from being destroyed. Apparently when one of your creatures or spells 'die' they go to the 'graveyard', what the rest of us would call the discard pile. Your draw deck is your 'library' and cards that are no longer in play are 'exiled'. Good thing your hand full of cards is still your hand, otherwise I donât think I could communicate with those players.

I watched them play for a couple minutes and it hurt my brain trying to figure out what was going on. I was surprised there were so many different things happening at the same time, but they seemed to know the order of how it should go. The ordered chaos was surprising to watch, a beautiful poetry of cards and hands all in motion. Itâs as if they were controlled by Magic, which, when I think back on it, maybe they did harness the Dark Oneâs power and were believing they were summoning dragons and elves to battle for them. The players were using the dark powers to eventually bring the Demon to earth and therefore bring the apocalypse down upon us.

And you wonder why I hate that they banned corporal punishment in public schools.

This post was written by Robby Rothe (@MTGColorpie). A guest author, webmaster, avid EDH player, and a friend of Gathering Magic.com.

In other news, the Magic 2011 spoiler season's pre-game show officially kicked off last night with some booster pack and booster box art.Â  Check them out below and get all of your M11 Spoiler info at the main page. 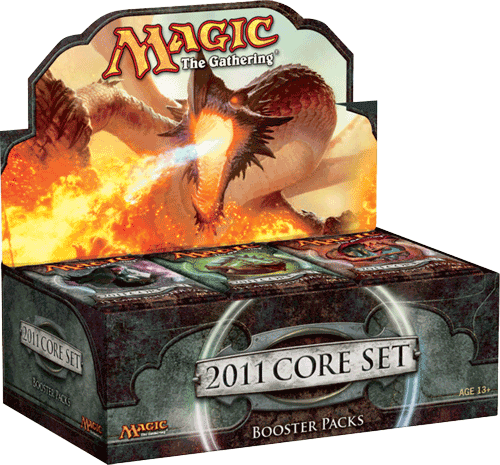