I like budget commander decks and our current playgroup loves playing 1DH or Dollar General. It's the mega budget version of commander, making deck-building surprisingly difficult to stay under the rough $1 threshold per card.

Some builds you'd assume would be great, like saprolings, a traditionally budget deck, weren't great because they didn't have an engine or the power to be playable. That all changed when Slimefoot, the Stowaway was previewed. I finally get to make my fungus deck. As Toad is my go-to Mario Kart and Smash player, I've been waiting a long time for this deck to finally be strong enough to play.

Today, I'm here to talk about Alex Konstad's lovely art and a deck that is built around it. 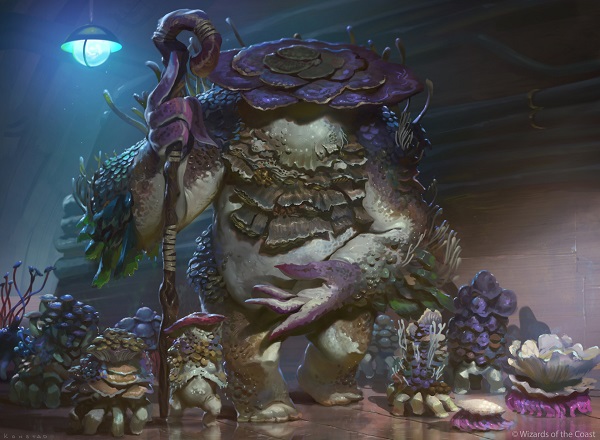 Slimefoot, the Stowaway by Alex Konstad

We get to see a commander with its little saprolings, looking like whimsical children heeding its advice. The purple is an easy addition, bringin the sea plant vibe to the "ship" and yet grounding Slimefoot in a more colorful direction. Fungi can be wild colors, sure, but more often they're dull browns instead of the brilliant luminescent blues. Let's return to this swamp creature in my art review in a few. For now, feast your eyes on our new commander. 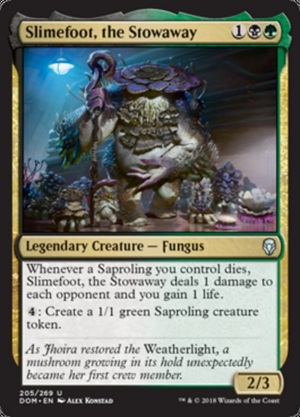 A few big additions are in Dominaria beyond the commander. Thallid Soothsayer and Sporecrown Thallid are both on curve as being easy to cast and incredible strong in this new build.

Cards that were fun to use in the past, like Deathspore Thallid, Psychotrope Thallid, Savage Thallid, Thallid Devourer, Thallid Germinator, and Utopia Mycon, are now engines to deal damage with upside to opponents. Add in Rot Shambler as a recently added card, and you can have a giant creature in seconds. And if you forgot that Nemata, Grove Guardian pumps your entire team, you now know that post combat, you can drain them again, really messing with combat math.

The "spore-counters" matter were never fast enough even for 1DH, meaning those that are all slow that don't have engine capabilities need to go. In doing so, I looked for a few abilities:

Previously, devour a terrible mechanic for saprolings because you're trying to add counters, not eat your creatures. Mycoloth and their buddy Skullmulcher are now superstars, making saprolings and dealing damage as a win condition.

Leading the way is Attrition with Viscera Seer. I like Vampiric Rites because of the tiny life gain to stay alive in addition to the obvious card draw.

Chaining together cards like Night Soil with Viscera Seer with my commander out is the key to the deck. Finding more combos will allow for that value to edge out more linear bombs that other 1DH decks tend to have.

If you want to see how killing everything x/2 is every turn, dealing damage to everyone twice as you hit your own saprolings with glee, this is it. Since you're in Green, you also have access to ramp mana, making the death of your commander not a major deal at all.

Do not forget Tendershoot Dryad. Making three saprolings before it's your turn, with a quick Ascend ability to have 3/3s is not fully known yet. These foils will be hard to find in the future. And no, we don't know if they are married. Fungi lead cryptic lifestyles. 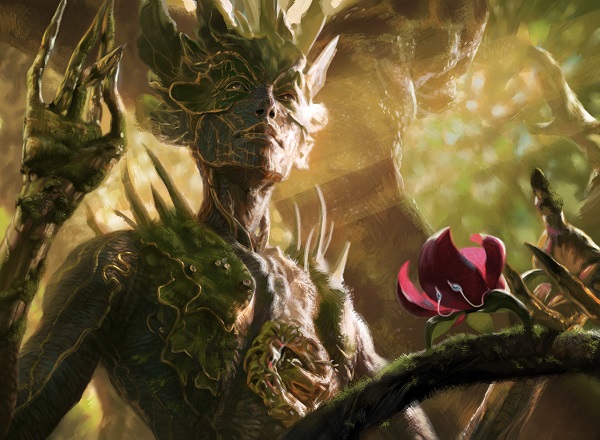 In order to make sure the engine is humming, paying 4 mana for one saproling is just too expensive. This is why cards like Saproling Migration and Scatter the Seeds exist. Often, you can find yourself with one saproling and that's no good in 1DH, a format littered with creatures.

Here's the working list that I had to get out.

The one quirk of the deck: It's slow. Little fun interactions like how Slime works with Rot Shambler are great, they just take forever. It plays like molasses.

There is always a short list I have but don't include in articles. This is that list, just so people know how much better it can be with just a little better cards.

This card is unreal in this budget friendly world. Oddly, people really do forget that you can fog a different opponent to gain favor, saving you for an alpha strike.

Since she's in a Duel Deck, you'll find these in binders to trade for pretty often. She is the utility planeswalker the deck needs to deal with large threats or massive Black decks. She only works at sorcery speed, but the little upgrade is well worth finding one.

The changeling that works in all tribal decks is slowly becoming harder to find as it hasn't been reprinted mega often. Also, since fewer people have them in binders, it's a big outside our deck.

build, this liege should always be on the list to include. It pumps dudes and creates them. They aren't saprolings, but they can still be sacrificed for value with your other engines on board.

Sacrificing two creatures can make 3/3s into Silverback Apes in size for your opponents if you have Tendershoot Dryad out.

If you really want to bring the deck to 11, every one of these cards will do wonders to make it incredibly competitive in nearly any build.

All the normal token based harder to get cards should be considered if you wish to upgrade.

A card desperately needing a reprint, this is the chocolate to the peanut butter deck that sticks. For adding a little extra bump, this card is absurd. For 5 mana, you remove one of their creatures and drain life.

Adding Attrition to card draw is even better.

The one card that makes this engine of a sacrifice deck into a monster is this card. When you can do one-sided wraths simply by sacrificing expendable troops, it raises the power level of your entire 1DH playgroup.

As the card drawing engine can be in any Green deck, if you want to beef it up, it's the first card to add.

Clearly tutors of any variety would help. I like to keep as few as possible to keep 1DH games faster, as more creature based interactions are common due to the lowered power level.

Go forth little saprolings, germinate and overtake the Ravnica streets where you belong.