Vorthos Wednesday, back again. Flavor central, this is your stop.

I recently got back from Grand Prix: Kansas City, all six and a half hours through the heartland of America in my diesel VW. Besides my entourageâs obligatory conversations about the local cuisine of barbecue burnt ends, which were crazy delicious, Jace being banned, which was long overdue and incredibly political, and Edgar Floresâs sealed pool, three swords and a Wurmcoil Engine, we discussed the culture of the Grand Prix. One thing kept coming back into the loop during the quarter-of-a-day trip back to wonderful Minneapolis:

How a Magic Player Suits Up

Clothing aids your self-image. You feel more confident and better about yourself wearing a tee-shirt, or a rotation of them, that you consistently have on when you win your local FNM. Not only that, but just think of all the subtle judgments you have quickly made about other players based on their appearance. These first impressions are important, which is why experts suggest that job-seekers dress appropriately for interviews with potential employers. Does a Magic player in sweatpants play differently than someone in a button-up shirt? I would assume soâas a snap judgmentâbut should it be that way?

Nonverbal communication is enormous in Magic. From combat to âJedi mind tricks,â the game at tournaments involves so much more than simply tap, play, swing, and cast. Considerable research on color psychology has demonstrated that different colors can invoke different moods. Appearance can also alter physiological reactions, judgment, and interpretations.

A few years ago, a psychology study was conducted on how color affects performance in Unreal Tournament. Statistically, red usually beat blue. While the Magic tables would say overall Jace and his cronies usually trounce the goblin color, what the players were wearing did influence winning. In short, donât wear gray when youâre playing six-plus grueling, stressful rounds.

You prepared your deck in person, online, and via numerous discussions with like-minded people. You have your juice box, deck, dice, notepad, and mental strategies. Is that enough? Can you omit other things? Is what you wear really important? What are your options? Letâs discuss your options for a Magic tournament, from the easiest to the most difficult of preparations.

1. No Magic-appropriate clothing; whatever is available

Jeans from the floor, belt is optional, tee-shirt, and perhaps two socks will make an outfit. As people must wear shirts and shoes for service, itâs the base value. Casual players in college environments love this option. I remember going to the band/honors dorm and playing with some cats in the community room, and I donât think any shirt didnât have forty creases in it. Seemed fine at the time.

2. No Magic-appropriate clothing; whatever is clean

The vast majority of players are in this area. Wear a tee-shirt, grab a belt and clean matching socks, pick up your jeans, and roll out.

3. Whatever shirt is unclean/clean with an MtGmom sticker on it

Itâs a must-wear accessory if youâre getting your photo taken. These little pink stickers have now become a mainstay of every tournament. Just an FYI: She sometimes brings cupcakes to tournaments, too. If you bring a sticker, she might give you one. Cupcakes for stickers seems like a great she has them. Just saying that if youâre developing a brand, consistency is key.

If youâre old-school, wear that Pro Tour competitor pre-Y2K shirt. We know you have that shirt and the phasing tattoo on your arm. Most pros donât have decade-long careers, ya know. 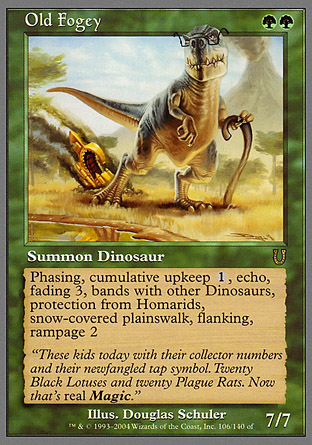 5. Purchased shirt from a gaming store/company 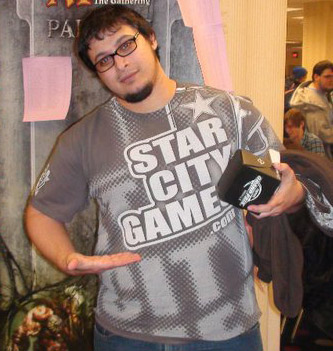 This should be self-explanatory. Also, constantly sold out. 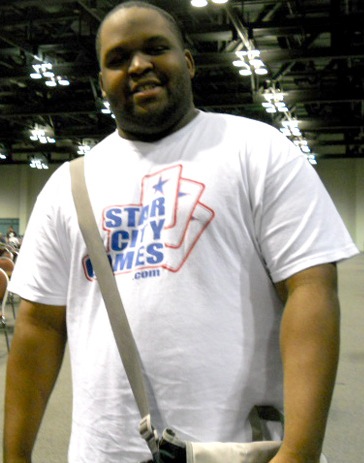 This also includes your âsponsoredâ local store. What is being sponsored? If youâve played any Tony Hawk game on career mode, you know exactly what being sponsored is. 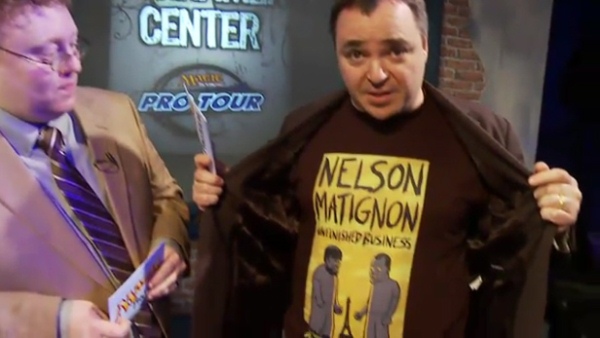 This area is vast, from homemade printed-out cards pasted on a long white tee-shirt, usually of a Black Lotus, to Justin Treadwayâs shirts.

A friend of mine at Grand Prix: Kansas City actually asked me if a local band was called Thraximundar. If only.

Independent of other clothing, adding your favorite piece of planeswalker gear is a possibility. This past weekend, I noticed a man wearing Chandraâs goggles. Now, I didnât immediately believe he was channeling Chandra (if so, heâs Gruul, right?), but couldâve been a motorcyclist or steam-punk enthusiast. But since his mustache was waxed Ã  la Salvador Dali, I assumed the whimsical side of him loved him some planeswalker. I didnât catch his name, but Chad Nalaar might be a good fit, kinda like Garry Gaga, Lady Gagaâs brother.

Iâve seen tons of goggles and am waiting to see what the iconic, easily implemented pieces of dress are for the other planeswalkers. Is there a market for Jace sweatshirts that isnât being fulfilled? You bet. Could an Etsy creator make all the amulets, talismans, stone, and necklace? Absolutely. Should more red wigs and yellow contacts be sold out around conventions? Yes.

Just saying that if there were a Vorthos who started making some high-quality swag that even Taavon would approve of, thereâd be some buyers.

I know cosplay isnât serious enough business for most players to focus on. I know most people would prefer to watch another draft video and hearing about how evil swings for 4, but a full, flavorful interaction has its place. Would a professional play differently against a person dressed in full planeswalker garb? Of course theyâd look at you differently. The argument that their guard is always up is a faÃ§ade.

The majority of the original planeswalkers and Weatherlight crew wore pretty normal fantasy clothing or marginal amounts of clothing. The current iteration of neowalkers has created a great variety of options if youâre going to out-Vorthos another cosplay Vorthos. (They maxed level, easily.) Taking months of work to perfect a costume is pretty fun indeed. Ever see a masterful creation of Frank the Rabbit? Itâs mind-blowing. When I see a full entourage on Collegehumor.com of the planeswalkers, Jace, the Mind Sculptor will return to Standard. Itâs been prophesized.

If you search âChandra cosplay,â youâll see barely two pages of Google hits. (One instance of 3D artistry is actually quite helpful for layering.)

We have incredibly diverse, interesting characters, but two Magic costumes in a bag from Party City arenât available?

Chandra: Red robes, red wig, goggles, some semblance of a form-fitting top, metallic-looking sleeves and boot covers. It should be $29.99 and available in four sizes.

Creativity really shines in finding the obscure legends or planeswalkers. Jaya Ballard is really just a catsuit, Braids has goggles and an impish grin, and Urza has a variety of odd robes with white hair.

At this level of dress, wearing other Magic âitemsâ is also coming into play. Badali Jewelry sold Magic color rings and necklaces until the end of March, but if youâre fast, you can still get a ring or two on eBay from their stock. Ben Stark covered it on his site, The Starkington Post. (As a side note, whatâs up with the site, Ben? Come back, we miss you.)

Think about dressing the part the next time you attend a tournament. Getting a psychological edge over someone who cannot get beyond the fact that youâre wearing a fire-red wig might help you eke out some wins.

In closing, Iâd like to say youâre welcome to Thomas Dietrich, wherever you are. I hope you liked your Santa-Claus-given free win at GP: KC.

Iâm not interested in byes, so when Iâm at a major tournament, I often give some cat in the bottom part of the tournament a free win. Why? Because I donât devote enough time to high-level playing, and those out there grindinâ deserve a random win every now and then. Iâm there for the flavor, and Vorthos is the giving type.

Bob Ross is on vacation this week. Weâre on reruns: