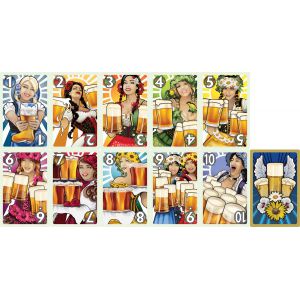 Pairs is a "New Classic Pub Game" by James Ernest and Paul Peterson, who also brought you Unexploded Cow. It's an extremely simple press-your-luck game featuring a deck of number cards (1 x 1, 2 x 2, 3 x 3, and so on, up to 10 x 10). There is only one loser, and the object is not to score points by colelcting a pair.

Echo Chernik's Barmaids deck is based on a simple premise: Ten lovely barmaids holding beers: one beer on the 1, two beers on the 2, and so on. It's the "Oktoberfest card game" and we're thrilled at how this deck came out.