Hello folks! You know what time it is!

Spoiler season is here! Are you ready for some fun Rivals of Ixalan action? After a fun little diversion to silver-bordered town, are you ready to head back to Ixalan for more Pirate and Dinosaur beats? Great!

I'm luckily enough to help kick off the new spoiler season with a new Magical Transformation. When you are on the battlefield, you want the most bang for your buck. Face it, your junky Human form can often be a little too squishy for your own good. You want to change your form on the battlefield in order to give you the most flexibility, right?

Take a look at this awesome card, and then we'll unpack it below. 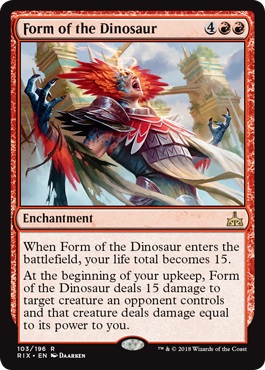 Form of the Dragon is also a rare Red enchantment that changes your life and shoots stuff as well. Now this Form has two additional layers to it that when are in Dinosaur Form don't. There is a defensive ability that prevents ground critters from attacking you, and the life total resets even if it later drops or rises. But when you are in Dinosaur Form, you aren't flying around, so Ground Pounders can smash, and your life total doesn't keep resetting.

Which means that the Dinosaur Form is great because it doesn't work against life gain.

Let's delve into the awesome that is taking on the Form of the Dinosaur, and unpack all of that meaty goodness!

First, note that Form of the Dinosaur immediately moves your life total to 15. In any non-Commander format, you were likely beginning the game at 20 life, so by the time you cast the Form, it will likely bring your life total back up to 15, which makes it a life gain card on the level of Blessed Wind. However, it's not an Eternity Vessel that can reload your life as well. This ability is normally outside the purview of Red, so it's something that has a lot of meat on the bones to offer. Note that in Commander, moving from a 40 life total to 15 is likely to move you down, not up. But when it does, 15 is still a lot more manageable than Form of the Dragon would be, as there is still a lot of meat on the bones.

Secondly, you are basically fighting a creature each upkeep. Your power is 15, so you are dealing 15 damage to an opposing creature each upkeep and taking their power in damage back. You are the most powerful Dinosaur on the Block! You are going to smash a lot of creatures over time. Now note that when you turn into a Dinosaur that you lose a lot of theâ.â.â.â subtletyâ.â.â.â that non-Dinosaurs have. For example, fighting is not a "may" effect. You are going to fight an opposing creature every upkeep, period. That's locked in. Secondly, while you have turned into a 15/15 Dinosaur, you can be easily distracted. I mean, you are clearly locked into the fight, and maybe even feeding, enough that you aren't able to attack your enemy or to fend off anyone who attacks you, and you'll still need minions for that.

However, nothing is going to survive your maw. 15 damage? That is taking down almost any threat.

Even an Eldrazi Titan is dead in your rending Dino-jaws! A 15-damage feast is going to take out pretty much any card that can take damage from a Red enchantment source. Kozilek is just meat to you!

So, let's start looking at some cool combos and useful synergies that Form of the Dinosaur can unlock. After all, when you shift to Dino Form, you want to be sure that you'll make the most of it, right! It's a pretty strong card.

Let's start with the damage side. Unfortunately for cards like Stuffy Doll, Form of the Dinosaur only eats opposing creatures. But ever since the early era of the game we've had cards that let you punish someone for the damage dealt to their critters. Here, let me show you a couple of cool cards in that vein.

The first is Repercussion. You'll note that it basically makes every creature have the Jackal Pup disadvantage. If you feast on an opposing Birds of Paradise, then they are taking 15 damage to the face, which makes Form of the Dinosaur a very quick clock.

Treacherous Link also plays into this space. Now note the Link keeps your opposing creature alive, it just redirects the damage, so you can keep on using it. It also doesn't turn itself back onto your stuff either, so that's a nice little bonus as well.

But what I really like about Form of the Dinosaur is how easy it is to use the reliable damage dealt to yourself each upkeep.

For example, want to load up something?

For example, Angelheart Vial will give you a lot of cards, as well as slowly restock your life total as well to give you a gentle break against the ongoing life gain. Darien, King of Kjeldor will turn that ongoing damage into a veritable army of Solider Tokens with a lot more speed. And that's not all. You could flash out Selfless Squire to prevent the damage during an upkeep and load it up with +1/+1 counters, for example. There are a bunch of cards in this vein.

There are also a number of tricks to just prevent the damage altogether.

That's a lot of options! Some are clearly better than others, but I wanted to give you a good sense of the multiplicity of options that are available to just prevent the damage and move on. Note that the damage to you comes from a creature, not the Form, so a Circle of Protection: Red wouldn't work. I love Samite Ministration on a Isochron Scepter, because it will always be prevented, and you have about a 40% chance of gaining some life as well.

Take a look at Platinum Emperion for two reasons. Yes, after your Form of the Dinosaur arrives, you won't take damage as your life total can't change. But in Commander, it's also good before you shift into your Dinosaur Form if your life total is higher, because you won't go to 15. Unlike Form of the Dragon, there is no ongoing life change, so it only happens once. If someone slays your Emperion later, it won't matter, the damage is done.

Check out Personal Sanctuary for a fun card that will always work, because it's your upkeep when your Dinosaur Form begins to get hungry again and it look for some more meat. You can also combine a few effects and run a few of these cards to make sure you are overlapping your defenses so you can eat contentedly, knowing a Palisade Giant is watching over you.

Note that Delaying Shield is great if it's just a few damage you stopped and you have the mana for it, or if you can Flicker it out with a blinking effect that works on enchantments. Cards like Felidar Guardian or Flickerwisp will work to reset it if you fought a nasty larger creature. Or you could just bounce it or sacrifice it before the effect went off. There's some intriguing options there.

My favorite in there is probably the Mourner's Shield which only requires you to imprint a Red card from a graveyard to work, and thus works without adding another color. But if you are going to add another color, check out Force Bubble. As long as you are eating someone with 3 power or fewer, then it's probably sticking around for a while, and it had added defensive abilities as well against players.

However, if you are looking to really push hard to push this to its natural conclusion, might I suggest Purityâ.â.â.â

Now that's a combo. Turn that damage into life gain. Feast your body and your soul as you eat opposing creatures. Form of the Dinosaur indeed!

Note that the damage dealt from Repercussion is also not combat damage, and would trigger Purity.

There's also a lot of other cards. I mentioned Eternity Vessel earlier as a cool card to compare it to, but that works as well. If your life drops from fighting creatures and other stuff at the multiplayer table, just play a land. Your life will rise back up and you should be good to go.

Another example would be to play loose and fast. It doesn't matter how big of a creature you feast on, because you'll reset your life total above the Form anyway with an Exquisite Archangel under your control. This is one of my favorite little Commander tricks. Drop your life total to 15. Have the Archangel rocking. Fight some annoyingly big stuff, kill yourself, and reset to 40, while still Dino-Chomping on more foes. Oketra's Last Mercy also plays into a similar space in Commander after dropping to 15. Outside of Commander, Providence is really good at putting you to 26, which is likely 6 more than your starting life.

You can also use cards like Reverse the Sands, Mirror Universe, and such to send a low life total elsewhere. There are a lot of life total switching effects if you pay attention. A lot more than most people realize.

Don't want to evoke the powers of Crossbreed Labs and combine the scaly ferocity of the Dinosaur with the flying majesty of the Dragon?

All you have to do is have both out at the same time! And hey, I'd call you the winner of that game, no matter what else happened!

Embrace your inner cold-blooded and let loose with claw and scale.

Now when are we getting Form of Uncle Istvan?