Hello folks! I hope you are having a fun-fueled New Year and Spoiler Season! I'm always loving a new release of another Pulp Set! And Rivals looks to be just as pulp-y as its forefather. That makes me a happy Abe.

As I was reviewing the spoiler with glee, I noticed that there were a few cards out there that worked really well with Phyrexian Dreadnought. Today I want to give you a Commander deck that uses it as a key part of its design.

So before we head off into the many cards from Rivals discussed below for these two decks, let's stop and review Phyrexian Dreadnought, for the record.

The good part is that it's a 12/12 trampler for just a single mana! You can stock up on a powerful card quickly! The bad part? It's disadvantage is rough. The current Oracle wording for it is: "When Phyrexian Dreadnought enters the battlefield, sacrifice it unless you sacrifice any number of creatures with total power 12 or greater." So it's an ETB Trigger. There are a few ways to get around that.

For a long time in Vintage, a powerful Dreadnought combo was combining this with Illusionary Mask. You would drop the Mask for two mana, and then you could play this for one face-down, and then you'd flip it over for nothing and then you spent three mana for a 12/12 trampler. You could easily have it turn one in Vintage. You could still have it turn two in Commander off nothing more than a first turn Sol Ring, and turn three otherwise. Because it's an ETB ability, if you shut off those with something like Torpor Orb, Tocatli Honor Guard or Hushwing Gryff will also stop this from triggering. So, there are a few ways to get a cheap Dreadnought without being forced to sacrifice anything.

This exact combo could work wonders in a Mono-Green Commander shell led by none other thanâ.â.â.â 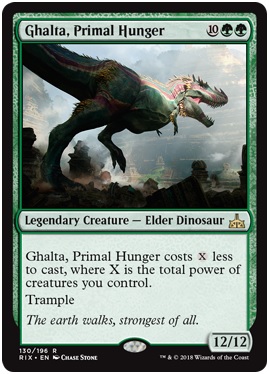 Imagine you are on, say, turn five (or earlier with acceleration). Do this:

Result? You have spent 5 mana at the latest on turn five, and you now control TWO 12/12 tramplers, one of which is your Commander and will kill faster with Commander damage! That is incredible.

And there are a ton of cards in Green that play into this. Greater Good will sacrifice a beater for an epic amount of cards. Soul's Majesty is awesome. Lots of power-into-card drawing options! Green's propensity with fighting will give you a ton of fighting removal options.

Need flash? Don't forget that you only need Green creatures to flash, not everything, so Yeva, Nature's Herald works just as well as Vedalken Orrery and such. Add in Lightning Greaves to hit now for no extra mana! Or Surrak, the Hunt Caller! I couldn't run Greaves in the first deck because I needed to target my stuff, but here, it's not a problem at all.

So, let's build it right now, and see where we wind up!

There are a ton of cards in here from Rivals. Many of them are just great options for Commander generally and this deck specifically. 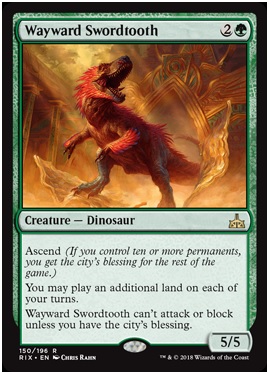 The Arch is amazing, as you should always have unlocked Ascend when you have the mana to activate it. Any ramp deck'll love it! We Also love the power of the double-exploring Jadelight Ranger or the self-Fighting Golden Guardian, who will always transform into the Gold-Forge Garrison. And in the meantime, a 4/4 defender still gives you a useful ability and helps your other stuff for the nonce until you want to flip it over!

Now we have a ton of cards that support Ghalta!

For four mana, you can get an 8/4 beater and give a foe a quarter of flyers. You can often use the gift politically to help forge alliances or to help someone stay alive for a little longer. In the meantime, you have a powerful Troll Smash ready. Of course, when you control Hunted Troll, your Ghalta is just four mana at its base, as you control an 8-power creature. Plus, since Ghalta counts total power, then you get the power of other creatures and a third or fourth turn Hunted Troll becomes a Ghalta on the next turn easily.

Other cards that play well here are:

Uncage the Menagerie -- For three mana, you tutor up Phyrexian Dreadnought, but you can scale it easily if you prefer.

Yisan, the Wanderer Bard -- Search up that Dreadnought on the 1st activation, and then spark up from there!

Primal Command -- Most of the options are useful, and tutoring for a creature can get Yeva, Surrak or your Dreadnought as you need.

Lhurgoyf, Multani, Maro-Sorcerer, Bonehoard -- I included some cheap creatures that scale powerfully, especially Multani. I don't care how many times you've cast Ghalta, Multani against a board of three opponents is almost always going to just require a GG investment.

Spectral Force -- Another giant beater to speed up the conjuring of Ghalta! And you'll find you untap it pretty often here.

Rhonas the Indomitable -- Did you notice that the New slate of Gods are in play even when you can't attack or block? That makes Rhonas an all-star with Ghlata, who cares about power. Also, pumping someone up? So great here. Just one activation turns Hunted Troll into a 10/4 trampler that regenerates. You are good to go as soon as everything breaks. And trust me, with Rhonas on your side, everything breaks!

Nylea, God of the Hunt -- Don't sleep on Nylea either since you will hit devotion so quickly in this deck. See cards like Primalcrux or Arbor Colossus that have huge costs orâ.â.â.â

heavy casting costs. Everything from Eternal Witness and Jadelight Ranger or Woodfall Primus and even beaters like Vorapede are deeply Green, and a Hunter will smash cheaply along with everything else in this deck!

Greater Good, Life's Legacy, Momentous Fall, Soul's Majesty, Hunter's Prowess, Hunter's Insight -- All of these cards gain life for damage or power and that's an epic amount of card drawing this deck proffers. Ideally you are going to sacrificing Ghalta because the replay is so cheap. Frankly, Ghalta might get Greater Good banned, because of how powerful that interaction is! Enjoy it now I suppose. Just don't deck yourself!

Monstrous Onslaught, Fungal Sprouting -- Tired of drawing cards? How about clearing out opposing creatures instead? Or making a dozen 1/1 Saprolings? Game on!

Riding the Dilu Horse -- How about this zany card? Note that the +2/+2 doesn't leave after you've played it, it's a permanent bump. And horsemanship means it's probably never getting blocked, so your Ghalta is now a 14/14 unblockable Commander. I think you might win with that quickly due to Commander damage. Shoot, even an 8/8 unblockable Woodfall Primus is going to win quickly just with normal damage.

Berserk -- Note that a Berserked Ghalta will likely kill most in one hit, although it's a non-bo with Lightning Greaves. Although you could Berserk first and then equip. Note that in the Berserk case, you wouldn't need to keep the Dreadnought the first iteration, unless you had the mana to replay it, so you could go off two turns sooner.

Don't think Berserk is some sort of annoying Green Spike-kill. It's not a card that's never been printed since. You have Fatal Frenzy or other effects today that are still Berserks. Normally Berserk in Commander isn't getting too much play with your 40 starting life and creature death, but here it's awesome!

Nissa, Genesis Mage -- This is arguably the most powerful Nissa ever printed for casual gaming. Untapping both two dorks and two lands is nasty powerful. We have a number of flip cards that'll improve when you are tapping lands that make a lot of mana. I tossed in Temple of the False God to go with the 2017 version of Gaea's Cradle, Growing Rites of Itlimoc. I didn't want to add insult to injury and didn't include the Cradle, but feel encouraged if you have one. It's very mana friendly as well as powerful for untapping two giant beaters after they swung for blocking. You can also give +5/+5, and that might normally be seen as something, but in this deck? Drawing five more cards from a Life's Finale? Doing 5 more damage from a Monstrous Onslaught? Dropping 5 mana from a cost on Ghalta? You could even make a creature big enough to sacrifice to keep out a Dreadnought. It's nasty! And the ultimate is great too.

Nissa, Worldwaker, Garruk, Primal Hunter -- These are insane in this build as well! Garruk adds to your "Draw 12 cards" suite of stuff while making 3/3 Beast tokens. Nissa untaps a top of Forests to net you 4 mana each turn, or can make creatures as well by infusing lands with a powerful elemental presence.

Surestrike Trident, Fireshrieker -- Both of these equipment play very well in a house of beaters. Take the Trident, for example. Suppose you put it on something lighter, like Vorapede. You can tap to shoot a player for five damage at the end of someone's turn, and then equip and still have it available later. Adding first strike to a big beater is very pertinent to keeping it alive in combat. But the best part is you can reattach and tap over and over again in one turn. For example, you could deal TWENTY damage with just Hunted Troll and Ghalta. And Fireshrieker is a one-hit kill with Ghalta and powerful with the other cards on this theme too!

Cream of the Crop -- You don't have to get card advantage to break the game in half. Every time your leader arrives, you are choosing the best of the top 12 cards of your library. And for Hunted Troll, Dreadnought, Spectral Force, etc, it's incredibly powerful. So you are pretty much using this to tutor your deck at that point!

But, get ready for the single best card in the deck. By far, my favoriteâ.â.â.â

Dragon Throne of Tarkir -- If you are casting Ghalta for

, then casting, equipping, and using this is pretty cheap. Tapping your Ghalta to make your entire team get +12/+12 and trample is game over. It's the biggest Overrun effect you'll typically see. It plays over the top of anything else you'll ever see! Trampling with 13/13 Llanowar Elves and Elvish Mystics just feels right.

Here are some cards that didn't make the cut:

Those are some great choices for your deck! So smash away with your Ghalta Loving!

Now I know that you might have thought that I really Spike-d that Ghalta Commander deck, and sure, I went hard. But there are a ton of cards I left out, such as Gaea's Cradle and Mana Crypt that also push this thing. And yet I am running Dragon Throne of Tarkir and Riding the Dilu Horse. How Spike can any Dragon Throne deck get?

Anyways, I hope that you enjoyed these two decks that were inspired by Phyrexian Dreadnought. From 60 card Vampire Shenanigans to 100 card Ghalta Shenanigans, there is a lot of fun to evoke here with Rivals of Ixalan.

How many other older cards out there will Rivals dominate?