Hello folks! I hope that you are having an awesome day today! Now that the spoiler for Kaldheim has been out for a few days I've had a chance to create my Top Ten list for the best cards from the set for casual, multiplayer, and Commander. I have created my list and then sat on it for two days and then came back with fresh eyes and changed up a few things. That's the best way to do these articles, really invest multiple days into an assignment like tis to ensure that it will be as objective as possible under the conditions.

This is the Release the Dogs of Kaldheim. It's four power of tokens for four mana. You'd prefer the four bodies of Release the Dogs for Anthem effects like Glorious Anthem which is why this bad boy hits lower on my list. I also don't like that this card makes 2/1s which trade down to 1/1s. But two bodies? Four mana? Which you can Foretell across multiple turns if you need? And which plays into Boros going wide strategies? Or Gruul? This has a lot of options and value! This is also our penultimate common.

Our first charting Mythic is this bad boy. Unlike many Red effects that prevent all life gain, this one doesn't shut down your own so you can still gain that life. It's also a clock that will force your foes to take two to the face each of your upkeeps. It's a clock and reliable as lifegain cannot be used to stop it, only answering the Bringer of Quakes will do that. Of course, every color has creature removal so that's not hard. When it does die, the damage trigger will continue if you control a Giant. There are 16 legendary Giants you could be using as a Commander, including 10 that are Red from Brion Stoutarm to Ruhan of the Fomori.

I like Reidane, God of the Worthy a lot for the new Standard. People will be playing Snow-Covered lands more now, but Reidane provides a brake on that. You'll also tax non-dorks of 4 or more mana by two, which isn't nothing. Reidane's Shield is valuable to locking down damage and countering targeting effects from everything from Shriekmaw to Swords to Plowshares to Oko, Thief of Crowns unless they spend a mana tithe. The result is a strong early drop for multiplayer and Commander on both sides of the coin.

Binding the Old Gods? New tech! Its arrival ability Vindicates anything that's not a land and that's great for a four-mana uncommon! Then you net that sweet ramp of a Forest and that's even better! Then you'll get deathtouch for a turn, and you'll likely swing through a defense that doesn't want to trade down. What is there not to like here? It destroys, it ramps, and it deathtouches your team. It's a great card for the modern build! It's also cheap. Right now, here at CSI.com it's $0.35. Vindicate is $3.49, Maelstrom Pulse is $1.49, so you'll save that cash by going into Binding the Old Gods!

Conspiracy. Xenograft. This card and ability have existed before in Black and Blue, and it's been highly valued and heavily played. But this? It's cheaper and it doesn't choose a creature type. It loves the party mechanic. It's also in colorless so any color has access to it! It's a better class of card for the effect, so enjoy it!

Our highest-charting uncommon is this fun Manalith variant. It's not as good as Skyclave Relic, which is better in the mid or late game and rocks indestructible. But I love this a lot! Drop it early, and if it sticks around? You'll get a ton more of this bad mana rock! The counter adding plays into proliferate and leaders in Simic that care about counters. It's a Snow mana-maker for your Snow deck. It's a lot of fun for the kitchen table! Manalith away my friends; Manalith away! 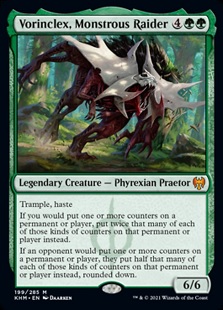 We have now added the Phyrexian creature type to the game! I'm really sad that this was not for the Phryexians from the previous set, Commander Legends. Take fellow Green Phyrexian Ich-Tekik, Salvage Splicer who serves Vorinclex. Could have been a Phyrexian! But nope. It'll be interesting to me to see what happens with this type and if it gets retroactively added to folks like Phyrexian Negator or Phyrexian Plaguelord. Anyways, Vorinclex is a strong card. Like the other Praetors, it doubles something you are doing and hurts foes in the same way. In this case you are doubling your counters, and you can use Replicating Ring to fork into a ton of Manaliths in just four turns. This works for any counter from loyalty counters to +1/+1s to energy counters. Meanwhile your opponents' counter making is halved and rounded down so a +1 loyalty ability from your foe won't put anything on their planeswalker. This bad boy is also legendary, so you can build a mono-Green Commander deck around him quite nicely. Include win cons that care about counters like Darksteel Reactor and Helix Pinnacle. Good stuff!

Two Green mythics back to back! I love me some Battle Mammoth! As you can see, the dork is a nasty on curve 6/5 trampler who can win you the game. You can also foretell it to split up its cost and drop it on turn 4 (or earlier with mana ramp). Don't sleep on that ability either. Did someone target anything you have? Anything? Land? The Mammoth? A mana rock or dork? Your precious planeswalker? Anything? With any ability or spell from Ravenous Chupacabra to Vindicate? Then you are drawing a card. The worst-case scenario with the Battle Mammoth is you drop it, someone kills it with Chaos Warp, Path to Exile or Beast Within, and then you draw a card. Not bad right? Right!

These are an awesome cycle of cards! We normally get dual lands like these with both land types in batches of 5 each, but not here! Now we have all 10 cards ready to rock the block. I love them! Don't sleep on their Snow-ishness as well, which makes them ideal for the mana making of the Snow Fun Times. From Snow to duals, these are a great cycle of commons. For that reason, they'll be super cheap, and you should pick up a lot of them. Like double digits. Good stuff, right? Right! Note that the Thriving Land cycle from Jumpstart is already at a buck each, so grab these now while they are cheap as they are better with the dual and snow land. Alpine Meadow is $0.35 right now. I'd grab a ton.

This bad Dragon is our highest-charting Red card! Five mana for a 4/4 flying and haste Dragon is expected and on curve for today's relevance. It'll get it a hit in prior to sorcery speed removal. Did you swing with it out of the gate? Great! You get a Treasure! And it'll sacrifice for two mana not one. You can use it on the post-combat main phase and only have used up three net mana for the Dragon that turn! And you can sacrifice other Treasures for a ton of mana and you can run this in a Treasure-matters deck all day long. Don't forget to grab those Treasures is someone targets it with a spell!

#3. In Search of Greatness

The highest-charting non-Black card is this fun enchantment. I adore this! On your upkeep you can cast a free permanent that equal to or greater (by one) your highest card. With just this on the battlefield and some lands you can drop a three-drop for free, then drop a land and net a second with your mana! Next turn you'll get two four-drops! This thing is nasty good! I love its potential and it's a strong option for the kitchen table. What keeps it back here at #3? Well, note two words that are missing. What are they?

"Or less." If you control just it, then you cannot drop a lesser drop, just a three-drop. Note that you do have that option if you have something that counts. Control this and a Birds of Paradise? Then you have 3 for this and 2 for your Mana Birds. If you can't cast something, you'll get a free scry so it's never worthless.

Here is our top mythic and another Black card on our list! This bad Demon Berserker is pretty sexy, keen, and cool. Let's look! You get a 6 mana 6/6 flyer! When it arrives to the party, you can tutor for two cards with different names, easy in Commander. One heads to your hand and the other to your graveyard. Get two cards that do the same thing like Swords to Plowshares and Path to Exile to answer a problem. Grab two dorks that have similar abilities like Shriekmaw and Ravenous Chupacabra. Grab two beaters and reanimate one and cast with the other for fun and power. It tutors and fills your graveyard at the same time. This is a nasty card for your nasty needs!

But nothing comes close to my number one selection. What is it?

I hate that this card exists. It's a nasty and easily abusable Commander who feels out of touch for Commander. She's five mana for a 4/5 menace on curve. And as your foes sacrifice permanents (that are not tokens) and discard permanents, you get those onto the battlefield under your control. She's nasty in Commander. Barter in Blood? Innocent Blood? Liliana's Specter? Syphon Soul or Burglar Rat? Then you get all of those cards to punch above their weight? She's a nasty force of nature and she plays into cards that don't play nicely with others.

This nasty sorcery costs three black, easy in a mono-Black brew. When you cast it, each player loses a third of their life, cards, creatures and lands. You lose them as well and it was designed as the Black Balance. Now you'll sacrifice 2 lands or so, and you'll get all of those sacrificed by others, in a four-player game you are up by 4-6 lands. You lose a creature or two, now you are up by all those nontokens sacrificed. You are down a few cards but up by all those permanents discarded by others. Everyone lost some life and Tergrid doesn't impact that. See the sorts of styles she encourages? She might be fine in competitive Commander but she's horrible at the kitchen table. Pox shouldn't get played unless you are cEDH. And I love Pox an have a Legacy Pox deck I've played for almost 20 years. But it's use should be discouraged at the kitchen table. And if your Commander breaks it? It's the wrong sort of Commander.

And there you are! What did you think of my cards? Anything that I missed? You know what? This is a nice deep set, let's look at another ten-set of cards next week!