Battlebond surprised a lot of people! It sort of slipped in after big name sets like Dominaria and Masters: 25.

I genuinely think that's a good thing. Because of its lowered expectations, the set looks like a mega hit; sort of a reverse Iconic Masters.

The set is filled with goodies, and set to broil. There are a lot of cards out there for us to Welcome to the Fold.

What's the best? What looks inviting?

For The Ferrett, who's clearly writing amazing MTG stuff again, I answer your Dub with Inner Demon!

I want you to do me a favor. I want you to forget about the Assist here for a moment. Think instead of the massive number of Zero Powered threats at the kitchen table you often want to answer. Birds of Paradise. Fog Bank. Various walls like Wall of Blossoms. Noble Hierarch. And many more. This is an answer for all of them for just a quick

. That's pretty good. Considering the vast number of enemies you want to kill with low power, this is a strong tool for your toolbox in games that favor big butts and small fronts. A 1-mana answer to many mana dorks before they can tap for speeding up their game is not something to forget.

This is not a bad card for your deck at all. While it was created for Two-Headed Giant decks, it's also clearly just good for play elsewhere. A 4/4 for four mana in Green with an ability meets the Ravenous Baloth Test of Value.

This card changed Magic. It was the first major, on-curve creature with a powerful ability to boot (compared to other cards of a similar cost, like Nettletooth Djinn, that had weaknesses instead). It was considered so good that it saw play everywhere. It was the first sign that creatures were about to improve in quality.

Thus, Bramble Sovereign meets the requisite threshold for size. Now, it'll be better in a game where you have allies or friends built into the infrastructure, like Two-Headed Giant or Secret Alliances.

You can still play politics in mutliplayer; you can give a token to someone you want to keep alive or are trying to befriend. And you still gain massive value from it as well, popping it on your own stuff for dorks-a-plenty.

I know that this may not be the sexy pick for a Top Ten cards from a new set. But you know what? I don't care! Mana is key to winning. It's one of the reasons why the first slate of dual lands is so expensive, and why other mana-only entries can be pricey as well. Mana matters. The beauty of these is simple. Are you playing multiplayer? Great! After the original dual lands, these are the best cycle of multicolored making lands, because they will always arrive untapped at the multiplayer table. Period. No damage from pain lands or shock lands, no coming into play tapped in the first few turns and that's it.

Now, there are going to be times where other lands are still going to have value. You'll want the shock lands because they can be fetched or tutored more easily. You'll want the cycling or scry lands like Irrigated Farmland or Temple of Abandon for card flow. You'll need the enemy colors. You'll want the face-smashing creature making Celestial Colonnade in some decks. You may want Underground River to make colorless for your Eldrazi. There are contextual reasons to run other lands at times. But if you want mana quickly, now, without jumping through hoops, this is where you'll stop.

Ho Hum. It's an eight-mana, exile-eveything sweeper. Ho hum. It lets others help you cast it to help reign in someone who has gone off the rails. Ho Hum. It's here. It's deserves to be here. But it's not new, unusual, sexy, or anything else.

Introducingâ.â.â.â SUPER FORK! Coming all the way from some random place that no one cared about 'till this set is BONUS ROUND!!!

The good thing about Bonus Round is that it copies all of your stuff for the round, not just a target spell on the stack. That's incredibly cool if you use it correctly. Double Lightning Bolts? Double Dark Rituals?

You are welcome for that.

But yes, we have tons of doubling going on! The problem is that our foes can also yield double Counterspells or double "I Don't Like You, Please Stop Doing That" spells. That does keep this out of the Top 5. But you are building your deck. And you are casting the spell. Time it when they've tapped out or have few cards in hand. Combine it with something that prevents them from casting spells on your turn or countering your stuff. You can break this into little pieces, my Johnny friends!

They may not be gaining life, but they certainly are losing it at double speed! The benefit of this lil' guy is that it only works on foes. Normally this is on a cheap enchantment that hurts you too. Who wants that? I might want to gain life again, Everlasting Torment!

But the good news is you only lock out your foes from the lifegain game, and you are free to party with Stream of Life all day long. Oh, and don't worry about the cost too much. We're Commander, casual and multiplayer. Spikes might have taken over Commander in a lot of places (cough, Mobile, Alabama cough), but there are still a ton of adherents who love the slower pace of normal multiplayer and fun stuff, and it's in the color of Cabal Coffers and similar Mega Black Mana Making.

But its cost does keep it out of the Top Fiveâ.â.â.â

So what effect's cost didn't keep it out?

This is my favorite of the Friend or Foe spells. First of all, it's cheaper than some of the other options. The sacrifice effect is actually fairly costed.

For example, three mana is the level of Fleshbag Marauder and similar effects. If you sacrifice them instead of something else, then you've basically cast a three-mana sorcery that reads, "Each other player sacrifices a creature." And that's not bad! In addition to that, we can roll out the Raise Dead ability for yourself and other friends or allies out there as well. In a four-person game, this returns a card to your hand, and forces three sacrifices, so a total swing of 1 card used, for 1 card returned to yourself, and three dorks killed out there up to 1:4 on the card advantage scale. These are the cards that collect card advantage and win you games.

By the way, is anyone else reading this as "Virtue's Maneuver?" Can we get a character name who isn't one letter away from a common name in Magic cards please? Thanks!!!

Just like the title of this card, I can sum up the power of this card in three little, simple, words and fourteen letters.1 Here they are:

And that's it. This is your 3 mana Wrath effect. And unlike cards like Retribution of the Meek, this one doesn't randomly miss a bunch of stuff, just one random dork will survive the onslaught. And unlike Bontu's Last Reckoning, you can actually do stuff next turn. It's perfect for the kitchen table, and I suspect a lot of people are going to run it because it's a random effect and they want to see which critter survives. Is it my Solemn Simulacrum? Jane's Birds of Paradise? Jess's Nalathni Dragon? Let's find out!

This card is clearly the Imperial Recruiter remade into Recruiter of the Guard for Conspiracy 2: This Time It's Serious.

But before we get to #2, let's remind folks about what Arena Rector is doing:

It's clear that this is creating a new cycle from a crazy popular card that is still total class. Did my Academy Rector die? Sorry! Let's go get an enchantment and toss it out onto the battlefield. Well, now we are locking in this as a cycle.

When this dies, fetch something out.

Clearly, we can have an artifact fetcher named "Anvil Rector" and another named "Aquarium Rector" to get a dork upon death, and such.

Welcome to the kitchen table, Oh Rector of the Arena! I think you are the third best card in the set!

And now the #2 that I clearly telescopedâ.â.â.â

There was a time when Five Color was heavily played at our kitchen table, and each week, everyone shuffled up a deck with at least 250 cards in it. Trinket Mage was played often to get a single artifact option. Skullclamp. The card flow is amazing. In fact, one of our players wrote up a quick lil' change to the Trinket Mage so you could remember what it actually does: 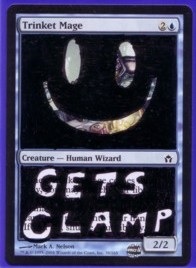 For a lot of folks, Spellseeker is going to have some version of, "Gets Ancestral Recall" or I suppose Ancestral Vision instead. Three cards ain't nothing. I'll run it to get card drawing, creature removal, land fetching, other stuff removal, and more. Two mana includes stuff like Terminate, Path to Exile, Rampant Growth, and for the Spikes among you, Mana Drain and Abrupt Decay. And Ancestral Recall. This is also a perfect card for today's Commander world where a dork with an Enters-the-Battlefield trigger is more valuable than a beat-y smasher.

So, get your Clampâ.â.â.â Ancestral Recall!

I know it may not have the sexiness of cards like Arena Rector. It doesn't have the cachet of Bramble Sovereign. It can't destroy (or exile) a bunch of stuff. It can't tutor for Ancestral Recall (or Ancestral Vision).

So, what is this five-mana enchantment doing here at the top of the list? Is it winning the game on its own? Is it changing the game in a major way? Nope!

But I believe that in a few months, we'll all look on Stolen Strategy as the best (new) card in the set. I even tossed it into my Commander decklist yesterday.

Why is this card really hitting my Abe-dar?

Is it the beginning of your upkeep? Great! You are an insightful player that clearly knew what they were doing and inserted this card into your deck.

You exile the top cards of your foes' libraries. Let's say you are in a four-person multiplayer game.

Let's say one of the cards is a land. Can't play it. Okay, check. Now you get a mana rock -- Everflowing Chalice, and something like Swords to Plowshares. Cast both, exile something, get a mana rock, and then take your turn as normal.

Next turn you can get a dork, a powerful planeswalker, etc.

This is a perfect card in a Spike-Heavy Commander metagame that we have right now. Its power rises as the power level of the cards in your opponents' decks rise!

Oh, and by the way, the cards that were exiled aren't going anywhere if you don't use them. They are now permanently exiled, so you can keep your foes from getting back their good stuff. It also has a strong synergy with certain cards recently printed such, as, say:

Do you feel like driving to a little Battlebond draft this weekend? I call Shotgun!2

1 I know that the title has fifteen letters to the fourteen below. That was done intentionally to see who would do the math.

2 I have no idea what the convention is for capitalization on the word, "Shotgun" when used to refer to the front seat of a car. And my Google surprisingly can't get you the perfect answer to the search phrase, "Hey Google, capitalization rule for shotgun." So, I am capitalizing it, and then hitting submit and sending this article out. See you on Tuesday!