I love the fact that Wizards of the Coast have been making old characters into cards for us. Commander sets, in particular, have been used to give us characters old and new that we needed to see in card form.

Characters like Feldon of the Third Path, Freyalise, Llanowar's Fury, The Ur-Dragon and Mairsil, the Pretender have all been printed recently in Commander sets.

And I can't tell you how happy I am that Wizards has continued this theme for Commander 2018.

Back in November of 2016, I penned an article for you about the Top Ten (non-planeswalker) Characters I Wanted to See in Print.

Since that article was published, Wizards has given us Ramos, Dragon Engine, which was number ten on my list. Thanks Wizards! None of the others on my list have been printedâ.â.â.â

She's a character that's really cool as one of the few Phyrexians we know of that successfully turned against her people. She was a big ally of Urza's, and will sacrifice herself to save him.

Xantcha was initially a Sleeper Agent for the Phyrexians.

She was intended to infiltrate, appear as non-Phyrexian, and become a deep sleeper agent for them. She was grown out of a vat to fight for Phyrexia by infiltration. And yet, she was able to turn against them. She fights for Urza and against her heritage, but never turns her back on her alignments and identity. Urza doesn't like how often she'll cross the moral line to aid him, for example. She's still a Black ally of Urza. And yet, she will sacrifice herself for him. There is something more to Xantcha. Something deeper and more interesting.

So, allow me to show you her card.

But before I do, I wanted to share with you a story.

I got this review of her last Monday on July 16th from my editor here for Gatheringmagic.com.

I sent back this quick reply as soon as I saw her:

In my entire writing career, I have never been assigned a preview that I immediately loved more than her. She is everything I hoped she could be, and more. I adore her.

So, I went home after work, and sat down to write this entire article in one sitting. I skipped dinner. I pushed back sleep. I stopped playing my dynasty as Huddersfield Town in Football Manager 2018. (Which, if you are an FM fan, you know is virtually unheard of).

I could not wait to finish this piece. 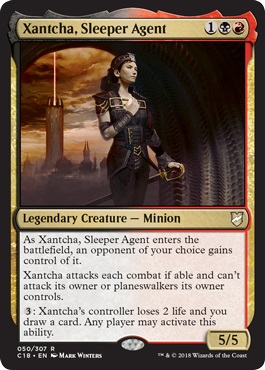 We'd like to thank Wizards of the Coast for freely providing us with this preview card from Commander 2018. Now, with that out of the way, let's begin!

Casting Cost: 3 mana, including Red and Black. My guess is that she was given Red to represent her rebellion against Phyrexia and her emotional range. What Xantcha does, she throws herself at. She is cheap, and she gives you access to two colors as a Commander.

Power/Toughness: You get a 5/5 for 3 mana! Now wait a moment. Even in today's day of creature power creep, you can't get that without a disadvantage baked in. Right? So, let's look at that text box to see what up with Xantcha.

Abilities: Much like the Sleeper Agent that she is, on arrival, she is going to head out and join another enemy's team but will really be on your side when she does. Unlike the Sleeper Agent, she has to attack every turn, so she will always have to swing, and that is not what you want. You don't want to get hit by your own 5/5 Commander.

But note that she cannot attack her owner or the owner's friends. Why, I believe that would be you, oh "Clever Player of Xantcha." You and your planeswalkers cannot be attacked by Xantcha. Only your enemies can. And Xantcha swings every turn, so she arrives quickly, has a big size, and has to swing at your foes. That is huge.

But that ain't all folks! Anybody can invest 3 mana and force the controller to lose a couple of life and then to draw a card.

So here, let's give you an example of Xantcha in play in a common four-way Commander match to see how she'll play:

It's turn three. You cast Xantcha and look at the board. Mason and Steve don't have any dorks yes, so you give Xantcha to Sally. That way she'll have two options to attack in case 1-drops a defense for Xantcha.

You pass. Steve passes. Sally untaps. She swings at someone (who is not you) with Xantcha, and her Elves. After combat, she casts another Elf. Mason takes his turn and casts a creature to block Xantcha on future turns.

Turn four -- You drop a land and pass. Steve uses his mana to hits Sally for two life and draws a card. Steve untaps and likely passes to do so again, unless he has an answer to Xantcha. Sally untaps and attacks again. Mason untaps and then passes to keep mana open. You activate Xantcha at the end of Mason's turn for a card and Sally loses more life

See how this goes? You are encouraging folks to activate Xantcha to both winnow down someone's life total and draw a card. Folks in Commander love drawing cards. And Xantcha is a fast Commander killing clock as well, and you can force someone to swing and smash in equal measure.

Xantcha is a powerful, fun, and interesting game-changer for your metagame. She offers a lot for very little mana down.

Now there are many ways in my mind to use her.

I'm a Johnny more than a Timmy or Spike. I don't like a Commander who has built my deck for me. I already know what a General Tasri Five-Color Ally or Sliver Overlord Sliver deck is going to look like. Kaalia of the Vast? Zur the Enchanter? Nekusar, the Mindrazer? So boring. They were already built for me. I don't want to complete a puzzle that Wizards designed. I want my own puzzle. I prefer an open-ended Commander that can be used in multiple ways, such as Muldrotha, the Gravetide; Ghave, Guru of Spores, and such. I can use that Commander to be a palette of my own design.

For that reason, I hate a spoiler article that has this awesome card, and then as I read the card and get excited and see great combos, the writer talks about all of those combos, and then uses them in the exact deck I was already thinking about. And I lose interest in the card by the end of the article.

So, for you folks out there that feel similarly, here is your warning. I am about to discuss some of Xanthcha's uses and synergies. If you don't want to read these ideas for using her, then skip to the Conclusion, and we'll see you next time!

Don't read these Jenny/Johnny! Everybody else, come on board!

There are a few cards out there that have obvious synergies to me for Xantcha. Note that one of the things that she does is have a distinction for her owner and her controller. She cannot attack her owner, but her controller can be affected by the activated ability,

There are other cards out there.

This is Zedruu the Greathearted. Xantcha's arrival on the battlefield means you could draw more cards from Zedruu. Now the color identity is a little wonky, as they both have colors the other lacks. You'd need either a four-color shell with everything but Green or a five color Commander deck to make it work, but you could also play them elsewhere too. There are also some other cards you could run that self-give themselves to others as part of their effect that play into this. I love these cards. I run Starke and Humble Defector in lots of my decks right now, including one of my favorite --my Diaochan, Artful Beauty Commander deck where no one wants to kill them because they can benefit them.

Another example of benefitting one foe, but not allowing it to hurt other is the Vow cycle.

I didn't show you Vow of Duty because it sucks. (If you give their creature vigilance, then when it swings, as you are encouraging it to you with these Vows, it can still block you, thus it actively hurts you where these four don't). All of these Vows benefit your foes and yet the middle two are the best because they encourage the enchanted dork to swing due to their evasive qualities, and Vow of Wildness isn't shabby. Vow of Lightning is the least powerful of these, but there is a place for it.

Assault Suit plays into a similar space. You grant the equipped dork to each of your foes each turn, and they have haste with the given dork, but they can't attack you or your friends (unless they take control of the Assault Suit). So, they are likely to swing and get that hit on. I love it on a Commander that has to attack each turn, like Xantcha!

You can give Xantcha, now a 7/7 haste, to each opponent on their turn, and they have to swing at someone for a lot of Commander damage, and you and anyone can drain each other for two life but draw a card. It's a great combination!

There are also subtle ways out there to encourage folks to hurt each other and draw cards. Want to draw a card off my Ludevic? Great! All you have to do is to ensure someone who is not-me lost life, which generally means you attacked with it. Edric can play a similar role, and encourage people to attack each other rather than you to get Bident of Thassa triggers.

You could combine Ludevic and partner him with Ravos, Soultender (or Tymna the Weaver) to get all four colors to combine Zedruu and Xantcha with some of these giving abilities.

If you are going that direction, how about taking Orzhov Advokist along with you?

Now, I don't know any of the other cards in the Commander deck that includes Xantcha. There could be some of the combos and synergies that I mention here. But one Commander idea that really attracts me is the idea of a Rakdos colored Group Hug build.

Because Xantcha gives herself to others and enables card drawing, she suggests Group Hugs, with cards like Mana Flare, Howling Mine, and such. I can definitely see a Xantcha deck that uses some of the cards suggested above, like Humble Defector, Starke of Rath, Assault Suit, and Vow of Malice to push that theme.

Goad is also pretty synergetic with Xantcha as well and dethrone isn't bad either. And Fumiko stands out as a great way to push people into attacking each other, as she doesn't force you to attack. That means you are often the only one with creatures to block, so they won't tend to attack you. I have a Fumiko Commander deck in real life, and the results on that front are pretty good.

Xantcha could really use indestructible, by the way.

Anyways, those are some of the synergies and ways that come to my mind as I write this article. I'm sure that you folks can come up with loads more! Anything that comes to mind? Any ways you want to take Xantcha?

I hope you enjoyed looking at Xantcha, Sleeper Agent! Anything you want to see Xantcha run with? Do you love her as much as I do? Anything ping your Magic radar? I had the privilege of introducing my 9th choice for the Top Ten Characters I'd Want to See Get Made Into a Card. Now we only have 8 to go. When is Talara coming?