Today I wanted to pause and take a looksee at one of my real-life Commander '95 builds - a Mono-Red build around Eron the Relentless from Homelands. This was my second C95 deck after my real life Chromium Steal 'N Sac brew (which you can check out here). My third build was my Skeleton Ship brew that was published last week (Check it out here). It's built around cards that can kill creatures with damage like Prodgial Sorcerer and Pirate Ship as well as -X/-X'ing like Grandmother Sengir and Minion of Tevesh Szat. Both real life brews are fun!

In Commander '95 (C95) you can only run cards that were printed up through the end of 1995 (Alpha - Homelands, Promo). The format has a ton of cards, some with very unique effects, and effects from burn in Blue (Psionic Blast) to discard in Blue (Amnesia) to the best land fetching spell in White (Land Tax) to some of the best flying in Red. In Commander '95, you are encouraged to run cheaper versions of cards like Chronicles, Fourth Edition, and the Commander series of cards like Control Magic or Counterspell or Swords to Plowshares or your leader like a Time Spiral Sol'Kanar the Swamp King. Keep it cheap! (My Eron the Relentless is a foil from that set) Shoot we don't proxy at my kitchen table, the format is too deep for that, but if your playgroup wants to, I won't object. And I made the format!

Blue is the strongest color, and Green the weakest, since there are only two ramp spells in Green and one only gets a Forest. But Blue is very limited in its traditional answers with just two good counters (Counterspell and Mana Drain) and only a handful of limited others like Remove Soul, Spell Blast, and Power Sink. Its card draw is banned (Ancestral Recall) and Braingeyser. Ice Age gave it Brainstorm and Portent. It's very shallow. Red is probably the second worst color, by power level, but it's the deepest color and has loads of great creatures (for its time), burn, and other removal spells.

I wanted to challenge myself to build one of the deepest but weakest colors in the metagame. 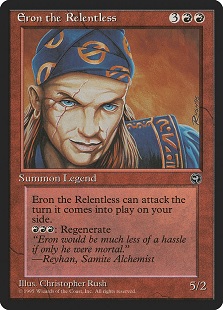 Let's look at Eron! One of my best friends is named "Aaron" and I think this may be his favorite legendary creature. Eron is the best Mono-Red legendary in C95. He is a Five mana 5/2 that can spend a crazy

to regenerate him, but that's easily accomplished in Mono-Red to help stop combat trades from giving you a Commander Tax to repay him, as well as haste. He's a five turn Commander Damage clock and with haste he can attack the turn he arrives to the battlefield. I like him a lot.

What do I want to do with him?

Let's look at my brew!

Let's start with my land base. I have only Snow-Covered Mountains in my deck. Why? Sing this duet to find out! Take a look at the artifact. Spend two mana and sacrifice a Snow Land to Fog for a turn. This is a great way to blunt a big attack like an Elder Dragon Commander swinging in the air over you. It's pretty strong! The enchantment is pretty strong as well. It's also a 3-drop. For no mana you can sacrifice a Snow-Covered Mountain to Fog for a turn as well! I love them a lot!

Check out this Enchant World. This is a great card for the build! No one can swing with more than two creatures, and no one can block with more than two creatures. With our defensive stuff like Walking Wall, Wall of Earth, and Dancing Scimitar, we can find ways to block two attackers without losing a dork. We can also block with the flying Granite Gargoyle and pump up its defense to survive the attack. We also have some bigger dorks in here we can swing with like the Firebreathing Shivan Dragon or Clockwork Beast. I love this a lot in here to keep us alive!

There are three Lightning Bolts that are legal in Commander '95. They include Lightning Bolt proper, and then Chain Lightning and Incinerate. All three are here! They are joined by Fireball, Disintegrate, Lava Burst, Pyrotechnics, Flare, Meteor Shower, and some others we'll look at below. I'm also running Detonate, which is a pseudo-burn spell since it destroys an artifact and deals damage to that artifact's controller much like an early Smash to Smithereens. Burn is very deep in this format. However, surprise... surprise I am not running Aeolipile. Crazy right? (I did run it in last week's Skeleton Ship build)

Hello mass burn! Wow do I have your two-some here! Check these out! The former is a powerful instant from The Dark that was heavily played in multiplayer and casual formats. It deals six damage to all creatures (and players) which is everything that is not a Force of Nature or Lord of the Pit sized body. It's always an instant speed sweeper of all cards being played. The latter card was in the first set as well as many printings over the years. It's an X spell against players and grounded dorks. We are running a bunch of Red flyers here as well as artifacts ones, like Clockwork Avian and Dancing Scimitar that will survive, but it's another sweeper, although not nearly as good as the former card. Note that Eron regenerates from both of these deaths and will stick around.

Let's do a deep dive into Homelands. Have you seen these legendary buddies in the same set as Eron the Relentless? They may not get along with our leader as Eron seems truer and more honest, but they are great tag team partners. Both are 3/3s for five mana and will tap for

to destroy a specific type of artifact. They add great bodies that can block, swing, and deal damage while also increasing your removal options. 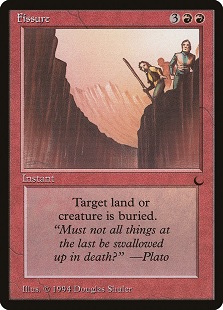 Hello Commander Players! Allow me to remind you that Fissure exists. I run one in my Commander Cube. Forget burning a dork, which is unreliable. Forget Chaos Warp that can backfire. There is this instant way of destroying any creature or land. And yet despite how good it is it's only run in 204 decks over at EDHREC.com. Be honest. You either forgot this card existed or you never knew. Don't sleep on it again! 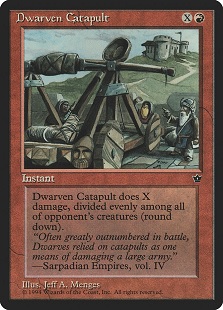 This is the last burn spell we'll look it today. It's basically a cheaper Fireball (in some circumstances) where you don't pay for targets but where you have to deal damage to all creatures a player controls. If your targeted player controls four creatures, then four mana in the X will deal 1 damage to them. If they have two dorks, then that same mana would deal two damage to them. Should they run just one creature than this will be an instant Lava Burst against it. 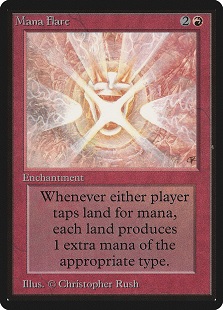 Check out the power of the Flare in this build! With all of the X spells and Rock Hydra and Balduvian Hydra, we have a lot of ways to go powerful with the double mana this provides. Other decks won't be able to take advantage of this mana making as much as we can. At least we hope. I am also running Howling Mine since we are not in the card drawing color and both Dwarven Hold and Red Mana Battery to save up a big X spell. 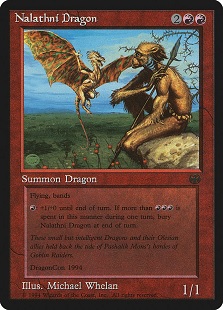 Let's look at one more fun card and we'll call it! This Dragon is the only card ever printed in Red with banding. It's like a Dragon Whelp in terms of cost and limited Firebreathing and it can swing over foes with its flying. With banding, if you block a single target with any number of creatures you can divide up the blockers as you want, so if you block with this and Granite Gargoyle you can put all of the combat damage on the Gargoyle and save it with its toughness boosting. If you swing with just one other non-banding then they can attack as one and be blocked as one but again, you'll choose the combat damage. I like this promo card a lot here!

And that's it, let's turn to the deck now and finish with some pics!

And there is my Commander '95 brew!

All right, let's look at some pics!

Here you can see some of my creatures and enchantments removal. 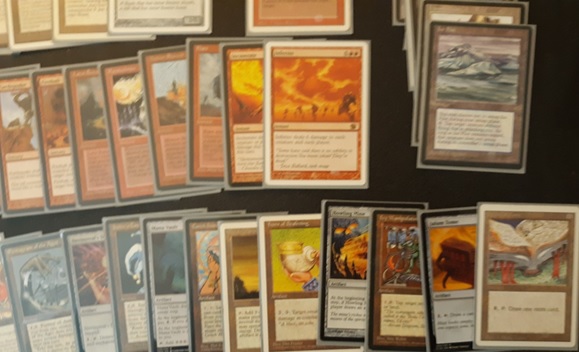 Zoomed in pic of many of my artifacts and more burn.

Here's my deck zoomed out 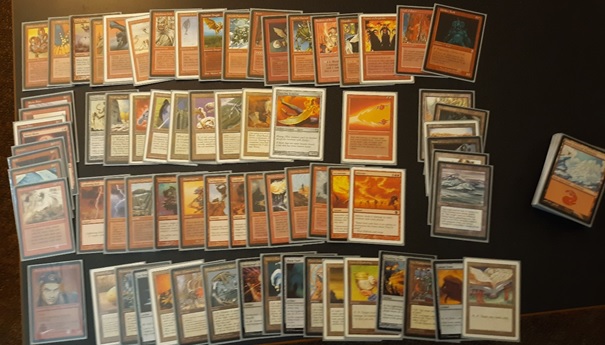 And there you are! So, what did you think of my brew? Anything I missed or that you forgot about? Just let me know!