Hello folks! I hope you ready to have some fun as we move into Throne of Eldraine. Are you ready? I see this as a bit of the shard of Bant meets the plane Lorwyn, although I could be wrong on that.

Today I want to take a look at Chulane, Teller of Tales, who was spoiled very early by Gavin Verhey, and then dive deeply into why I suspect that Chulane will lead my feature Commander build - Equinaut. 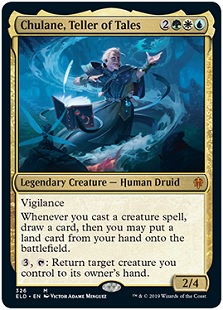 This is our new friend Chulane. Everyone say, "Hello Chulane!"

Chulane has a few distinct dials he is running. First of all, he's Bant, which is great. Bant loves Chulane. It has many a card that Chulane will just love and love and love some more, and we'll take a deep dive into a few in a moment.

Then we have the cast trigger. Cast a creature spell? Good job, here's a free card. And you can get a free ramp as well, so Chulane is great at turning creature casts into ramping. Finally, you tap and self bounce something, which is.....

Because it looks like Chulane is handmade to lead the deck that I made decades ago, and have turned into my most distinct build. Equinaut. I've written about that deck extensively. I've given you an EDH version of that deck which made the cut for Wizards, Deck of the Day the next day. It's been my feature deck for a long, long time.

And now we have a leader that feels handmade for it. I doubt it! But I could not have made a better fit for my deck than this thing.

What is Equinaut, and what does it plan to do?

My initial version of this deck was Standard legal back during Invasion Block and I would take it to local tournaments and win pretty regularly.

Here are the two cards it was designed to abuse:

Note two key things about this cool combination - Equilibrium is a cast trigger for a dork. I can cast the Panther, spend another mana, and then bounce any dork I want. A foe's? My own to reload? Sure thing! And then I can bounce the Panther back to my hand and keep on trucking.

This was my innate synergy. Now I ran cards like Meddling Mage, Birds of Paradise, and Mystic Snake that wanted to play into the same shell, as well as things like Sunscape Battlemage and a single copy of Thornscape Battlemage. My deck ran a lot of dorks, and it had some fun.

My deck was always sensitive to mana. I needed mana to make the engines reliable. I needed Equilibrium as soon as possible, as well as Panthers online. It's a lot of fun!

My deck met its final components that pushed it into some powerful space after the first Ravnica block came out. I moved more and more to a creature-only base as my deck moved in this directions, and some cards like the Mages came out for better and faster beaters. (My deck was Extended legal during this time, as an FYI)

Here are some of the final cards that made my deck in its final form.

As I am self-bouncing my own stuff regularly with Equilibrium and Fleetfoot Panther, this became a potent card-drawing option.

With Momir Vig in my deck, my deck began to add more one-ofs, and I could tutor it out with Eladamri's Call as needed to help with my stuff. Note that this also added a key cast trigger to my build as well.

Loxodon Hierarch was great as it gave me life on arrival and I could send it out to save my team from removal. Watchwolf was much better here than you might expect. I had added in a single copy of Tolsimir Wolfblood to help go wide or make two dorks and pump up my many Green and or White cards, and thus having both colors became increasingly important.

But that's not the final push:

This was! Now Opposition wasn't legal at the same time, but this was and it was AWESOME. Imagine if you did this:

And you may activate Aura Shards or Momir Vigs and self-bounce Mystic Snakes and loads more. I'm sure you can witness this potent synergy, right? This is a nasty set of synergy.

We also got another self-bouncer with the Curio to help you go or to reload a Panther that had toe stick to the board. And you can run all of the normal tricks of a Panther (saving something from removal, making a blocker, self-bouncing something with a Pacifism on it, etc) as well!

And everything was right with the world.

Many fun additions were made, like Death Kitty, Jr, and New Kitty.

I also moved extensively away from any card that wasn't a creature. I had too many creature triggers to frump around with traditional Counterspells and Seed Sparks. I yearned for more and more creatures. My deck ran synergies like Panharmonicon.

But through it all, it's always needed more and more mana. Every land that is dropped opens up another trigger option, but it's never enough! I need more lands!

I turned this deck into a Commander deck, and then I initially had it led by Jenara, Asura of War.

While Jenara gave me some synergies - she was a flying beater I could drop early, and I needed flying in my build, but she was typically just a placeholder that gave me my colors.

Shortly after the release of the second slate of Planeswalker decks, I finally had two new options that both fit my deck:

Who did I want as my leader? Roon or Derevi? Roon gave me a fun 4/4 body and the ability to self-flicker one of my dorks. However, as I have mentioned many times before, Equinanut is not a blink deck. Sure, it uses a few enters-the-battlefield triggers here and there. But that's not the identity of the deck. It's a deck that combines the power of leaves-the-battlefield, enters-the-battlefield, returns-to-your-hand and cast triggers to give you a powerful suite of options. Therefore, Derevi was the better fit. You can drop him early, like Jenara. It adds flying. I can bring it out for fewer than it's mana later on as it takes some damage. Plus, it adds to my mana needs as I can untap a land or Birds of Paradise to make mana for my build as I smash, or tap down some threatening dorks. It's great!

But it's never been a perfect fit.

Chulane is a perfect fit. Here's how:

If you had pulled me over and told me that you were going to pay me to design the perfect Commander to lead my Equinaut deck, I could not have designed one that's better than Chulane.

So let's finish off with my Equinaut deck, as now led by Chulane!

And there we are! What did you think of my deck? Anything in here that I missed or that you'd suggest? Just let me know, and have a great day!