Hello folks! Commander 2017 is almost upon us, and today is Wizards Day! This is the creature type that is in the brand of the company that makes the game: Wizards of the Coast. So, you know that they are going to have something a little special lined up for the new Wizard Commander leader, right? Right!

Get ready to take a gander at this sweet and sexy card and then weâll look at a number of cards and ways to use here, as well as some of the context of what she is doing out there. 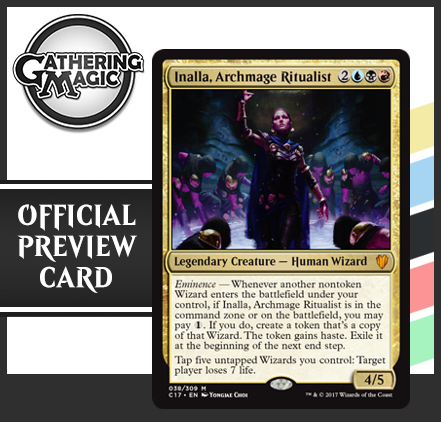 Let that sink in for a moment. Allow Inallaâs majesty to reveal itself.

Note that we are getting a Wizard leader in Grixis, not in Esper. We are not playing this in White, but in Red. That gives us access in Commander to a better slate of Red Wizards such as Anathemancer, Dualcaster Mage, Feldon of the Third Path, Izzet Chronarch, Jhoira of the Ghitu, and Niv-Mizzet, the Firemind fun!

The additional access to Red opens up a lot of options for Wizard deck-building, from direct damage to fun and powerful spells to crack open a board state all nice and easy. And a card like Chaos Warp will do better fighting cards like enchantments than something like Blue or Black could do on their own.

And of course, Inalla has the expected Black and Blue, with everything from Shadowmage Infiltrator to Disciple of Bolas applying for Inalla abuse. You have a lot of options to explore!

So letâs take a deeper look at Inalla, Archmage Ritualist and unpack what she is doing here and how she can help you dominate your table!

The first ability we see here is that fun Eminence. Whenever another nontoken Wizard arrives to your party, you can spend a mana to Heat Shimmer it. Get a copy, and swing! Abuse the token. Sacrifice it for an effect!

I think one of the best ways to illustrate just how lethal her Wizard Eminence Token Making works is to use it with a mediocre example. Consider Merchant of Secrets:

Itâs a pretty weak common. Three mana for a 1/1 that replaces itself is pretty minor. Itâs not even the 2-mana Elvish Visionary. But with Inalla? This is basically a 4-mana Mulldrifter (Thatâs a little smaller in size and on the ground, but you get the idea). And Merchant of Secrets will always be Eminence-able with Inalla because her ability works when she is in the command zone or when she is on the battlefield. It doesnât matter. So, unless you can find a way to shut off the triggered ability when she is on the battlefield, (which is not easy), you can always churn out a Wizard token for one more mana.

Please note that Inallaâs token making trigger occurs when something enters the battlefield, not when you cast something and there are a few cool ways in her colors to use that. You can sacrifice the token creature that would otherwise die after attacking, so you profit. See Goblin Bombardment for an easy example. You could Blink a Wizard in and out of the battlefield, like with Ghostly Flicker, to increase your token-spewing triggers. Another route on that path is reanimation and you could lean into your Black suite of cards to bring back a dead Wizard while also getting a quick copy for a turn of smashing. Consider the vast power of Patriarch's Bidding naming Wizard in this deck!

Here let me show you:

Wow! All of the Wizards return! Now sure, your enemies will get their Wizards back, and the Bidding is nice and other players can each name a type too, and all of those come back, so it works well politically in the multiplayer context that Commander is played in. In a deck where most (or all) of your creatures are Wizards? And where every Wizard of yours that returns will trigger Inallaâs Eminence? Even if she is in your command zone?

That just staggers the mind.

Shoot, her token making can even amp up simple support cards like Information Dealer:

Before Commander 2017, there were 616 Wizards out there! Thatâs a lot of built-in synergy that Inalla, Archmage Ritualist brings to the table. Sheâs got Wizard friends for days and there are many ways you can build around her as a result.

Note that she can speed up early plays a little. Any early drop Wizard can have twice the initial board presence for another mana, so your simple Aether Adept, Shadowmage Infiltrator or Harbinger of the Tides will be pretty powerful early.

Now, where Inalla really shines is with her second ability. Tap five untapped Wizards and pull 7 life from someone. And you can repeat as needed at the end of someoneâs turn. This ability is very reminiscent of those in tribal themes in Onslaught Block. Here let me show you:

This is Skirk Fire Marshal, and like all of the cards in this genre, you can tap some creatures for a big, game-changing effect. Now, Inalla is a better version of this. How? First of all, sheâs five mana just like this guy, only much bigger. The difference in value between a 2/2 for five mana and a 4/5 for five mana is downright epic. But you can see where the ability shines, right? Hereâs another:

Yes, that is a 1/5 creature for five mana. So sad. Weâve clearly grown up in the creature department since then, right? We already had printed a weaker Wizard Lord too, and again, get ready to shiver for the 1/3 that is this majestic beast.

Now, we have a number of these cards, and the Tap Five for a big effect certainly evokes these, but it does it so much better. There is a trio of tricks when you use Inallaâs tap machine.

First, you can use a creature to activate these tap abilities even if they do not have haste, and did not begin your last turn under your control. Summoning sickness does not apply. If you have Inalla out, and then play a Wizard and then get a copy, you can tap both to use her ability along with three other untapped Wizards you control to pull seven life off someoneâs life total.

Second, you can use her to tap herself. For example, if you control four untapped Wizards when you cast her, then, after she arrives at the battlefield, you can tap her and the other four Wizards to use her ability immediately. She can tap herself.

Third, note that nowhere does Inalla require that the Wizards that tap to use her draining life ability are ânontoken.â Not only will her own token making ability work with her tap ability, but you can also use other ways of making Wizard tokens as well, like Feldon of the Third Path or Lich Lord of Unx. You can also use something like Splinter Twin or Kiki-Jiki, Mirror Breaker to make tokens of Wizards as well, especially ones with cool abilities. Those tokens canât be duplicated with Inalla, but they can certainly tap for her ability.

Now, along that tapping-of-creatures line, this is the card that (almost) everyone was thinking of when they saw Inalla spoiled for the first time:

That is a nasty card. Over on Coolstuffinc.com right now, a near mint one is $9.00. If itâs reprinted in the Wizard themed Commander deck, then get ready for a whole powerful world of Wizarding Control with a new injection of these ready for new players. And if itâs not reprinted, then I would expect the Patron Wizardâs price to increase considerably. With Inallaâs ability to make tokens, you can get two of these Force Spikes every time you have a Wizard enter the battlefield under your control. Now one will die at the end of the turn, but you could use it immediately, or flash a Wizard out on someone elseâs turn and more.

Hereâs another that will get immediate attention from Magic-dom:

Wow does Azami have synergy with Inalla! Imagine you played that Merchant of Secrets mentioned above, and got a duplicate. Now tap both with Azami and you drew four cards from one Merchant of Secrets. Double the Wizards means double the card drawing power of Azami!

Now Wizards has twice before printed a tribal set as one of the supported themes. In Onslaught Block they were one of the key themes in the three sets. And in Morningtide, they were a lighter theme. And you can find Wizard themed cards outside of those two blocks as well, like Vedalken Aethermage and its Wizardcycling ability. You can easily find Wizarding cards out there when you look!

Ixidor's Will is a virtual hard counter.

Want to add some great in-theme options for Red? How about:

Itâs time to Wizard this thing up! Are you ready for your new Wizard overlord? Step forth Inalla!