Hello folks! I hope that your Thursday is going well.

Earlier this week, CoolStuffInc announced the release of a set of New Player Commander decks that were designed around each of the colors, with a mono-colored theme that should be fun. I was lucky enough to help design the decks, and over the last few days, I've been taking a look at each of these in turn.

Today we'll be looking at the Mono-Red Build, and we'll finish tomorrow with our Green deck around a certain Elf leader. The goal of these Commander decks is to provide an on-board ramp for those curious about Commander (or Magic in general). The goal of these decks is to push synergy and get a feel for the format before moving into a deeper dive into the themes and colors.

As a part of the article today, we'll be giving you the full decklist for that build, looking at the themes and some of the cards, and then finish with few suggestions for where to go next on the cheap.

I wanted to delve into two major themes with Captain Storm. Artifacts and pirating. 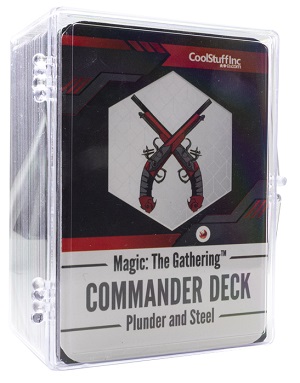 Let's look at her deck!

This deck wants to use and sacrifice artifacts for various effects and loves Treasure as a way to fuel that fun. Cards like Orcish Vandal can tap and throw artifacts at people's faces. When you sacrifice a Treasure to this, your Captain will love it and grow in size. We also have effects in here like Hijack that can steal an opposing creature or artifact for a turn, and then sacrifice it as well. These fun little combos are great to discover in a project like this.

There are some cool synergies in this build, like Quicksmith Rebel. Drop Captain Lannery on turn three. Then swing and make a Treasure. On the next turn, drop the Rebel, and then tap your Treasure to deal two damage to stuff. That's a fun little combo there. Jaya can also increase your damage from you leader, creatures, burn-based removal, as well as these various sacrifice and burn-ish effects.

And that's the deck!

Now if I were to dip into adding some additional cards, what would I suggest? Assuming I had a budget of $100.00 here's where I'd start looking to add some additional synergies to our build.

How about some more Treasures! The first place I'd look at are these two mass-Treasure making guys, as they can really make a ton of Treasure each. I really like Brass's Bounty as it can easily give you 5-8 Treasures later in the game and sacrificing those can make a big ol' Captain Lannery Storm and be fuel for other effects. Dockside Extortionist is awesome too. The more artifacts your foes have, the more Treasure it'll give you. It's good in all stages of the game as it scales up.

Now, despite the fact that it was just printed, it's very, very expensive compared to the rest of the cards I'll mention. My deck will still come under budget, but it's more than one-fifth of my budget in one card. However, most of the rest of my suggestions tend to be bulk rares or cheap commons and uncommons, so the budget is still fine. Since we don't have a lot of options, getting this into the deck is great...

...here are three more examples. These are pretty much the rest of the Treasure-makers for your consideration. Not only are these (mostly) Pirate themed, but they also are good at making those Treasures!

Captain Storm is going to love following a Treasure Map to its final destination! You can churn the Treasures she makes, as well as others, into cards, while also increasing her size. The Treasure Cove is one of the best places for the deck and our Pirating leader.

Now, before I focus more on artifacts, let's push more into Pirates!

Here we have four major on-theme cards for your consideration. The first is good as you can Act of Treason opposing dorks and repeat as long as you have mana it requires. The Crew can swing and block and do some fun things. Note that if you steal an artifact creature, you can sacrifice it to a sacrifice engine like Orcish Vandal after you swing and before you give it back.

Next is Dire Fleet Daredevil, a fun 2-ddrop that can arrive to the party before Captain Storm and is good later as a way to give you a method to cast a fun spell from a foe's graveyard. This is an amazing way to cast a strong non-Red spell, like exiling creature removal or card drawing. I've used it to cast Damnation to sweep the board and Tidings to draw four cards.

Kari Zev is another fun 2-drop, and who doesn't want to swing with Ragavan?

Even when it's not crewed, Fell Flagship will pump your Pirates a little. It's a fun vehicle to crew up and send over. You can force discards, and vehicles will dodge a lot of traditional removal. You'll note that we also have Heart of Kiran in the deck already.

All right, and now that that my Pirate and Treasure theme is set, what now?

Curse of Opulence! Now note that Gold and Treasure tokens won't mix mechanically. Captain Lannery Storm isn't going to improve in size when you sacrifice them, but it still fits the theme and the mechanics of the deck, right? Right! And Treasure Nabber steals artifacts when they tap for mana like Sol Ring and friends. You can tap them and then give them back... unless you sacrifice them before that occurs.

How about some artifacts to sacrifice? Mind Stone and Burnished Hart are great cards that play into your artifact sacrificing fun times. Cards and lands! Scrap Trawler is a fun engine to run alongside your sacrificing effects as you can put cheaper ones back into your hand. Take the Hart and Stone as great examples. You could sacrifice a four-casting cost artifact and then get the Elk, then the Elk to a Stone, and then the Stone to something like Pyrite Spellbomb. Now sure, that assumes a stocked graveyard, but you get the idea. It's a great adjunct to the deck's strategy.

How about some other ways to use and harness Treasures and other artifacts? Great! Goblin Welder is a classic that swaps any artifact on the battlefield with one in that same player's graveyard. You can use it to swap something powerful with something weak as a sort of pseudo-removal of your enemy's artifacts. However, here, it's key uses are to turn Treasure Tokens into more permanent options. It's great here!

Pia and Kiran Nalaar are classic as well. They bring two artifact bodies to the table on their arrival, and they give you another outlet to sacrifice artifacts to. You can sacrifice Treasures or other artifacts into Shocks to people's faces or their stuff, and they are key additions to this build. Note that both of these have been reprinted enough that they are very cheap on the secondary market these days.

Now...how about the Goblin Welder planeswalker and the daughter of Pia and Kiran?

Yup! Here you go! Daretti is awesome as you can discard up to two and draw, so it churns cards, as well as tosses some into the graveyard. This will give you the ability to sculpt your graveyard with the right artifacts to recur. His -2 is a Goblin Welder effect for yourself, and that adds another level of Treasure into Treasure of a Different Sort.

Chandra, Pyromaster can give you solid card flow and also ping stuff if you need. She's best used with her 0 being used over and over again for the Red Way of Drawing cards.

How about this newly printed duo? Both of these cards have been printed over the last few sets. The Manifold Key can untap a key artifact dork, mana artifact or vehicle. It can also be used to send someone, like your leader, without fear of being blocked. This is great when you want to swing to make more Treasure, but no one is safe to attack into as they all have something that can jump in front and kill your dork.

Goblin Engineer has already dominated Modern. It's an amazing way to Tutor for an artifact into your graveyard on arrival. You can also sacrifice artifacts, like Treasure, for smaller stuff, including what you just grabbed if it's cheap enough. It's a great third Goblin Welder for your build.

All right, time for some lands!

These lands are strong. The first two are great in a strong pro-artifact build like this one. You can Tutor for, or recur, a key artifact for your deck. The Arch gives you another way to draw cards. Note that your Treasures will help get you to the city's blessing and you can Ascend once you do.

While adding in some cool lands, I also wanted to add in a few sacrifice engines. Phyrexia's Core is the only land-based artifact-sacrifice card, so I tossed it in. Sacrificing a Treasure for life is cool! Most of the other lands that sacrifice dorks are too expensive for this project, like Miren, the Moaning Well. Because it's Red and expensive to use, Keldon Necropolis is a bulk rare, and I tossed it in for you.

I'm also adding in the cycling lands too. Red doesn't have a lot of card flow options, so I'll take what I can get.

All right, here's our budget for you!

As you can see, I came in at a little more than 73 dollars. Now please be aware that prices can change from when I write this to when you read it. That happens. But this would still be a good place to start to upgrade your deck if you enjoyed it and wanted to push your Pirated Treasure.

I hope that you enjoyed this deck! I can't wait for you to try it out, and I hope you have a lot of fun with it. Tomorrow we finish up our look at this series by looking at a Mono-Green Elves brew. I hope you'll check it out!