Hello folks! I hope you are staying safe in our modern COVID-19 world!

It's October! It's the most Spook-tacular month of the year! Today I want to unpack cards that evoke the Cthulhu Mythos to me a big fan thereof. It's suitably October ish. In fact I dedicate my October to the Mythos and only review stories from the Mythos each October over on my YouTube channel, which you can check out here.

What is the Cthulhu Mythos? Great question! The Mythos is a large-scale horror where the entire world is out to get you. Everything is, secretly, worse that your biggest nightmare and your biggest concept of evil. We are tiny little mice to the powers that be that could wipe up out in a moment if they only cared to do so. Nothing is coming to save you at the end. It's a shared universe that began in H.P. Lovecraft's 1928 seminal horror story The Call of Cthulhu.

This universe has been written in many of the best writers in speculative fiction and has won Hugo awards and Stoker awards as well. Writers in the Mythos include Stephen King, Neal Gaiman, Roger Zelazny, Robert E. Howard, Clark Ashton Smith, Robert Bloch, Fritz Leiber, Harlan Ellison, Grant Morrison, Alan Moore, and many others. Those include the creators and writers of many major works from Conan the Barbarian to the Chronicles of Amber to Watchmen and Sandman.

Welcome to my list of cards that feel in the oeuvre of the Cthulhu Mythos!

It's influenced a lot of MTG cards including two full sets! Which two?

Shadows over Innistrad is a name check for the short story The Shadow over Innsmouth which is considered one of the best Cthulhu Mythos stories by H.P. Lovecraft and a classic of horror. It's my favorite in the Mythos by the creator Lovecraft and it is heavily anthologized and is a classic horror work. It's well paced and my favorite scene in the Mythos is the hotel chase scene. The entire set has a massive amount of Mythos feels and you'll see more than one entry in here from it.

Eldritch Moon likewise name checks a lot of folks. It's also very much a Mythos feeling set as the conclusion of the two-part block where Emrakul arrives at the scene ready to rock and drop some mutated rockers onto the nearby land. You have to pay a prize to party in Emrakul Land. This also has a very Mythos feel to it. Emrakul is rocking a similar feel and tentacle look....

Each version of Emrakul features tentacles much like Cthulhu! 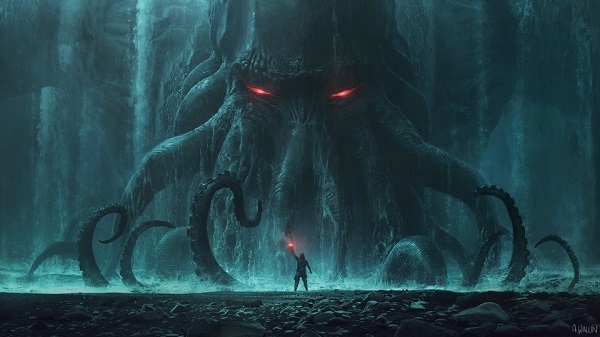 Here's a view of Cthulhu from the wiki to compare Emrakul's two pieces two (You can find the entry here. Can you see their similar nature and feel?

All right, ready for my top cards? Let's kick thing thang off!

What level of evil does it take to have the power to warp the landscape around you? It's powerful stuff! In Shadows over Innistrad, one of the key clues that something dark and sinister is happening is the warping of the very land around them. That also happens in the Mythos and is often one of the first signs of something very potent laying in wait. I enjoyed seeing it as a clue in the set of what was happening.

Dark rites in churches is a common motif in the Cthulhu Mythos that hide behind the normalcy of faith. Sometimes they have created a new faith, such as the Esoteric Order of Dagon in the town of Innsmouth as seen in the aforementioned Shadow over Innsmouth. Sometimes they corrupt a current church that it still ongoing, like the church in Providence in H.P. Lovecraft's final solo story The Haunter of the Dark. Sometimes they might be in ruins, like the destroyed church in Stephen King's Jerusalem's Lot. Corrupted churches are a big component of the Mythos, and thus Westvale Abbey's appearance here!

One of the keys to the Cthulhu Mythos is "Knowledge That Man Was Not Meant to Know." When you find out or see the reality behind the scenes you are likely to go mad with the truth of it, which is something probably coming from Arthur Machen's earlier classic horror short story The Great God Pan which influenced the Mythos. In that story drugs allow you to see reality and thus enables one to interact with it. Many cases you get hidden information from books like the Necronomicon, one of the key elements on the Mythos, or another eldritch text. Enter Forbidden Alchemy which plays into the theme of Forbidden Knowledge. In this case your natural blue spell has been tainted black. You can dig and find the stuff you need. This is one of the best examples of the Forbidden Knowledge trope in the game, and I only have one card hitting higher.

And now let's look at the Top Ten proper!

The idea of a physical manifestation of mutation for dark paths followed is very Mythos in feeling, which makes Grotesque Mutation absolutely on theme. Mouths in the hand with the warped fingers into something else also rubs my Cthulhu Mythos button quite ably. The art, the concept, the name, it all feels Mythos to me. I really like the creepy fingers and hand. There is a minor antagonist called Y'golonac who was created by a famous British horror writer named Ramsey Campbell which you can read about here. It has to possess a human, and when it does, it has mouths in its hands in a similar imagery to the one above...

This is the card I referred to earlier in the Forbidden Knowledge aspect of the Cthulhu Mythos. This Researcher is doubly possessed. It'll fall from its ladder and it'll fall from grace. See how much he needs that knowledge? That's the sort of possession you see from Antiquarians in the Cthulhu Mythos. An Antiquarian is someone who collects artifacts and old things and they are all over the Mythos stories as protagonists and sometimes antagonists as well. This horror story concept was popularized by M.R. James in stories like Count Magnus which the Mythos also follows all over. Note that you have to sacrifice your Hapless Researcher in order to use it, which represents it's fall from grace. Or the ceiling. They are more closely related then they seem in this case. 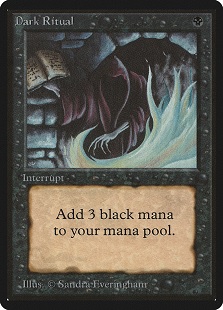 Did you expect to see the first set represented in today's list? Well here you go! As you can see, the Dark Ritual has a cloaked figure with a eldritch tome that speaks of forgotten knowledge. The idea of rites is very common in the Mythos and you have long forgotten and banned rituals done regularly. Often with sacrifices. A good example is Robert E. Howard's The Black Stone set in Central Europe where our central character researches a black stone coming out of the ground. Other examples abound. There are a number of Rituals and Rites I could have chosen in the game, but I decided to use the original as a great example thereof.

Forget Emrakul! Hello Marit-Lage fans! I hope you are doing well. Before Emrakul brought all that Cthulhu joy in a can we had Marit Lage in Dark Depths debuting back during Coldsnap, which was well before the Eldrazi rose in the original Zendikar Block. Marit Lage has a lot of Mythos-like elements to it from being under water (In the short story that debuts Cthulhu, it was imprisoned in the ruined city of R'lyeh under the water long ago in the Pacific Ocean). In this case that water is ice, but you can melt the ice and bring out Marit Lage. Also, Marit Lage is not unlike Cthulhu visually with the emphasis on teeth and tentacles and two big eyes. Let's have a shout out to this card!

Hello Deep One Hybrids! What are Deep Ones and their Hybrids? They are Hybrids that are introduced in Shadows over Innsmouth that live in water. They are born normal but over time grow into more and more fishlike humanoids. The creature in this art appears to be around halfway to full Deep One levels. You can read more about them here.

5. Wounds from Shadows Over Innistrad

Welcome to the top five! Now let's return to the famous set and look at the wounds that are showing up all over the plane of Innistrad in various art and places. These wounds feel very Mythos to me as well! Much like the warped land around them, this is also often a sign of the infiltration of a powerful Mythos character, as they are powerful enough to warp, not only the land, but flesh around them as well. This is another key Mythos aspect in the set!

But we have another...

...which is this one! Not the signs, but the results! Here you see that people have fallen to the temptation of the power offered by your Mythos creature, or Emrakul playing into that role on the plane of Innistrad. Grizzled Angler is a great example of the pre- and post- fall of our chosen creature. I love its flavor! Note that the Grisly Anglerfish is fishing for...things that eat men with the head of the Grizzled Angler on its lure-stalk. That's very Mythos feeling as well! I really enjoy it.

3. Peer into the Abyss

Shoutout to The Abyss as well. Peer into the Abyss feels very much like what happens when someone knows too much. They have figuratively Peered into the Abyss as they have looked into the dark truths of our realm. And they are scarred from it as well, with the madness that seems to be protrayed in the art of the card itself. It's cool that we have cards from the first set (Dark Ritual) to Magic 2021 and everything in between! Enjoy this work and Izzy's great art!

Ah yes, the Clues! Investigating! The Mythos was originally written during eth Pulp Era, which was during the era of the detective story and there are two types of investigating that happens. The first is true boilerplate detective fiction like Kim Newman's The Big Fish, where actual film noir style detectives meet the Mythos. Jace's role in Shadows over Innistrad always felt very much in that vein. The second more common type is the investigation into darker things by the protagonist such as an Antiquarian who reads dark tomes, finds eldritch secrets, explores cyclopean ruins made from non-Euclidian geometry, and more. These cards have less of a film noir feel and more of a horror feel as well and tends to play into exceptions. Either of these two investigating stories can exist within the framework of the story and both work with the cards in the set as well.

How could anything else be here? I mean seriously! This has a name of genre of horror that the Cthulhu Mythos represents. It has tentacles and eyes in big numbers. It's big and black and you have to pay to upkeep It or else! It'll be displeased and it'll head for the big starry sky and smash you on it way out for daring to fail to upkeep it. Cosmic Horror is one of the earliest cards on this list and is clear evidence of the power of the Mythos on the game. Did you even know it existed?