Hello happy people! I hope that you are having an amazing day today! Today we are going to look at a real life Azorius Artifacts deck that I built around the original legendary artificer, Ayesha Tanaka. I also have Rasputin Dreamweaver in here if you want to go with colorless synergy rather than flavor.

Why this deck? Great question! Here are all of my real-life decks. As you can see, I don't repeat a theme. I only have one Tribal deck (Beasts), just one control deck (Oros, the Avenger), just one planeswalker brew (Cromat), and so forth. I don't have any artifact decks, and I was thinking...why not? And while I am building one, why not build something bizarre and off the wall rather than the normal Esper build?

Enter Commander '95. In this sub-format of Commander, you are only allowed to run cards that were printed up through the end of 1995 (So Alpha through Homelands, Promo). It uses the same banned list as Commander (save I unbanned Time Vault, Falling Star, Chaos Orb, and Shahrazad, and the middle two with the errata that "Players cannot rearrange your battlefield while this is on the stack or on the battlefield.") This way I could only run cards that were printed early in the game, and thus aren't massive staples of Commander Artifact'ery.

Alright...let's do a deep dive into the build!

Check out this fun sorcery from the second expansion set ever! Drafna still hasn't been printed as a legendary dork, and my guess is that it'll happen someday, although probably not today or tomorrow or soon. As you can see, this sorcery will reload your library with all the dead artifacts from your graveyard that you want to bring back, in order, on top of your deck. Pretty nice, right? This is a cheap common that you can pick up here at CSI.com for around $2.50 each.

I built this deck around the best card from it's expansion set not named Workshop or Candleabra. I have a bunch of cards that I seek to recur and they have great value. You can also Raise Dead a destroyed artifact creature from combat, and we are running quite a few here. Check out the Sage that was reprinted recently. You can tap this two drop 1/2 Human Artificer for sacrificing an artifact to net a card, and then you can tap the first card for two mana to recur it, and then recast it. Good duo!

Here are cards that I seek to sacrifice to Argivian Archaeologist. As you can see, each will be destroyed for creature kill. The Trap will sacrifice to destroy a non-flying attacker, which is pretty good in this brew. The Launcher will spend 2 generic mana into a damage at any target from planeswalkers to players to their dorks. And then it dies at the end of the turn it was used. Then you can tap the Archeologist to recur the one you used this turn and give it another go. Both are great reactive tools to use and abuse with the Archaeologist.

Here are two more sacrifice tools you can use and abuse with the Archaeologist, and these are more proactive. You can sacrifice the first to draw two and then put one from your hand onto the top of your library, like a mini-Brainstorm. It's a nice colorless effect in this deck. Then we have the first Bauble, and, as you can see, it's a 0-drop that can sacrifice to look at a card at random from a hand and then draw a card for free next upkeep. It's a free card, albeit a slow one, and looks good in this brew!

I am running the expected duo of Clockwork Beast and then Clockwork Avian, but I love the Gnomes as well! As you can see, they are a 2/2 dork from the final set legal in C95. You can tap them and some mana to regenerate an artifact dork. Save your Shapeshifter or Tetravus from burn that would kill note. Note that key removal that prevents regeneration in this era (Terror) cannot target artifacts. Most removal that can target artifacts allows regeneration (Shatter, Lightning Bolt, Crumble, Detonate, Disenchant, Divine Offering). The only exceptions are Dust to Dust, Ashes to Ashes, non-regeneration burn like Incinerate, and Swords to Plowshares, as well as the mass removal spell of Wrath of God. It's stronger than it looks. I tossed in Living Wall as well which self-regenerates.

We have some bigger artifacts that can win the game. The Ring is a powerful game winner that can tap to destroy anything Serra Angel size or smaller, but I tossed it in to serve as player control. The Colossus is a powerful game ender from the next expansion set is the biggest playable creature in the format as no one runs Leviathan or Polar Kraken. It needs mana to untap, but if you have the mana to drop it, then you have the mana to untap it as well! Good stuff!

I love Animate in this brew as the idea of a swinging 8/8 Aladdin's Ring makes me laugh! It's the first card that let's blue turn non-creature artifacts into creatures, and we've seen that as recently as The Blackstaff of Waterdeep. It's pretty iconic here! And then...you can Steal the Artifact instead, and get your own best artifact of them all. Sacrifice to Sage of Lat-Nam! Or Animate and swing! Love it here!

Hello colorless mana-makers. I love the former card here as it can store tons of ice counters which you can remove for colorless mana and reload by spending three mana each time at the end of someone's turn before you untap. I also enjoy the colorless counterage of Rasputin in here as well, as you can easily get ramp for tossing out a fat artifact like Clockwork Beast. You also get a mana ramp from the best counterspell in Commander! Don't be afraid to cast it to stop a card, and then you net that mana on your next main phase. Good stuff! Drop those bigger folks from your hand!

Here's another mana maker, the Machinist. It'll tap for 2 colorless mana which you can use to pay your artifacts' activation costs. A two-mana ramper on a two mana body is really keen and nifty and cool even if it it's limited to artifact activations. Enjoy it here!

Let's look at more mana. I love the Mana Battery cycle in this format as you can load them up with counters if you don't need the mana, and then use it for a big spurt, and we could make a giant Braingeyser! I also love the storage counter lands from two sets later that can also be used to store up counters for a rainy day, but they won't tap for a mana like the Mana Batteries will!

Want to make flying creatures over time to push the game further? Need to block an attacking Shivan Dragon? I've got you either way! Enjoy the Wasp-making Hive! Or dig into the Book of Rass. It's a colorless version of one of Commander '95's best card drawing options out there - Greed. This is two generic mana, two life, for one card, so it's more mana intensive but can be put anywhere and into anything. I like it a lot here as it is an artifact-friendly way to draw cards repeatedly. The best card drawing cards in this format include Necropotence, Braingeyser (in here), Jayemdae Tome (in here), Greed, Wheel of Fortune, Book of Rass, Howling Mine (in here), Brainstorm (in here) and Sylvan Library. Pretty good!

We have another card-drawing option here. As your artifacts head to the battlefield, you can spend 3 mana to draw a card. Good card flow over time! This card is amazing with the Argivian Archaeologist as that will bring back your destroyed artifact. Note that the Oracle on this card reads, "if it wasn't sacrificed" so you cannot draw cards from this when you sacrifice something like Conch Horn or Urza's Bauble. It does work on tokens, so 1/1 Wasps dying will trigger it. Good stuff!

I love Kaja Foglio's art here, how about you? I adore this card here, so let's make it my final card! When you spend two mana and tap her, you will untap a foe's artifact and gain control of it for the turn and it gains haste. You can swing with a stolen artifact dork. You can tap a mana rock like Basalt Monolith or Mana Vault and make mana. You can tap and draw a card with Jayemdae Tome or force a discard with Disrupting Scepter. You can steal a creature to block an attacker that is coming your way. But my favorite thing to do is to steal the newly legalized Time Vault, untap it, and take another turn and then keep on keeping on!

Cards that I initially pulled for my deck but then cut include Wrath of God, Jalum Tome, Remove Soul and Ray of Command.

Ready for the decklist? Here you go!

And there we go! Note that this deck is missing two (pricey) cards that would make this a lot better - Transmute Artifact and Power Artifact. I don't have any more copies, sorry.

And now it's time for pictures! 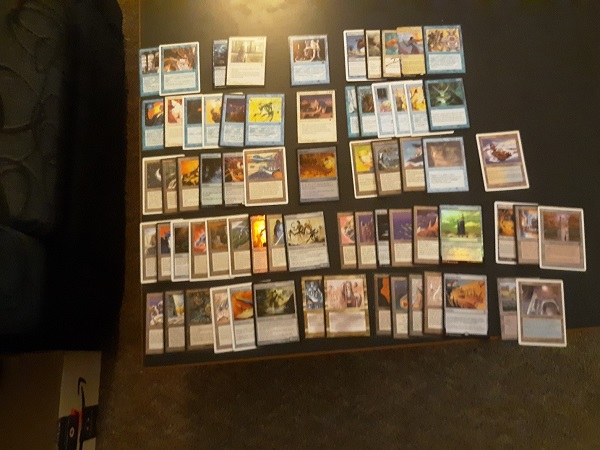 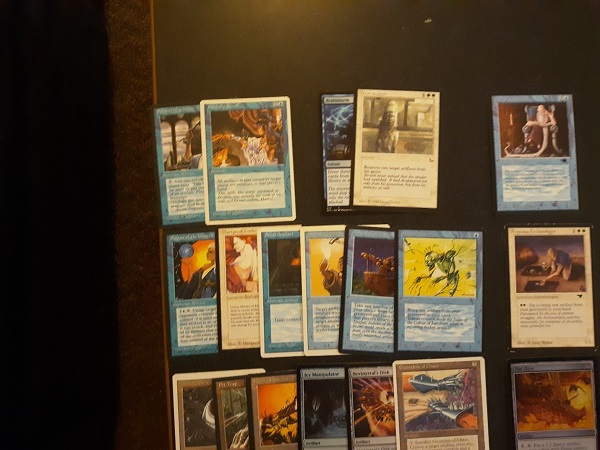 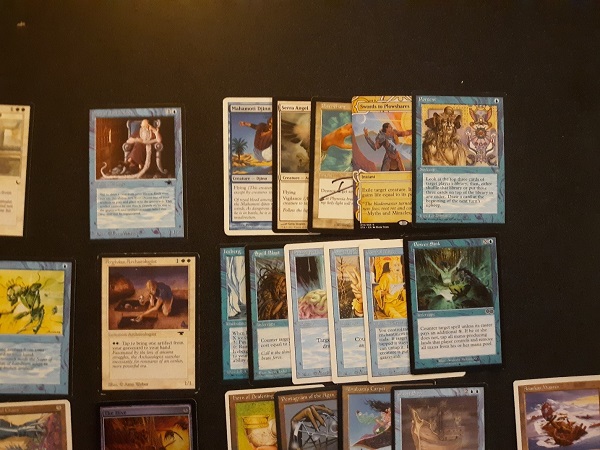 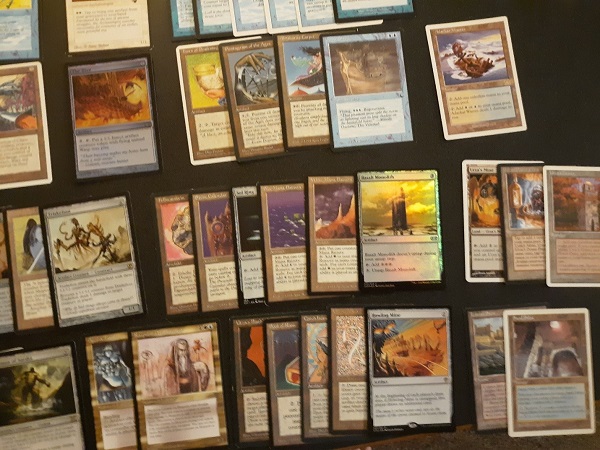