Welcome to votinbg for the sixth iteration of the Altered Reality Challenge! In this challenge, artists were given the prompt toÂ alter a Sliver card. We received a total of 15 entries, all of which as shown below.

As a reminder, there are two winners in each ARC: the Community vote as well as the Judge vote. Until this Sunday, August 11 at midnight (Eastern), you can vote for your favorite alters (you can vote for every alter you like), share the chance with others campaigning for your pick, and fight to see your choice go all the way. In the event of a tie within the Community voting, the aggregated Judge score will be used a a tiebreaker.

If you want to be a particular abut your pick(s), you can also debate and decide using the same criteria our panel of judges will use:

Now, onto the entries! 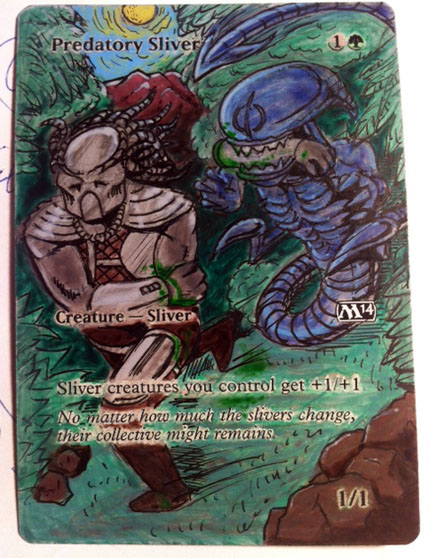 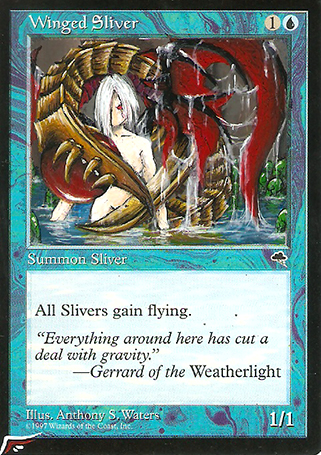 Though the execution was poor, I was really drawn to the initial concept of the Slivers evolving into humanoid shapes. I wanted to see what might happen if we took this all the way to its logical end: Human Slivers. I really wanted to tell the story of the birth of the first fully humanoid Sliver in the piece, and I only wish I had more space to work in!

Also, I'll be giving away my entry over on my Facebook page, so be sure to check it out and put in an entry!

The Hive by Thomas Parker When I think of Slivers, I think of their power as a hive. For this alter challenge, I wanted to emphasize the idea of Slivers needing and helping each other. To emphasize the hive mind of Slivers, I extended the art of a Sliver card onto another Sliver card. By doing this, I hoped to represent how one Sliver's abilities are gained and shared by another. I picked some of the first Slivers, some from their return in Time Spiral block, and some of the recent Magic 2014 reincarnations. 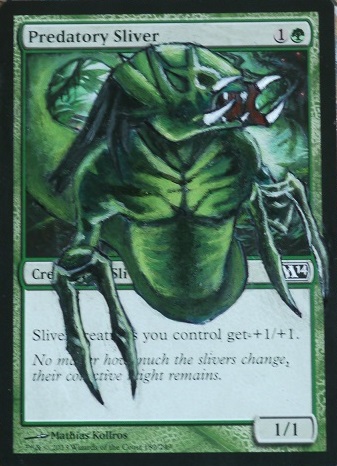 I really liked the flavor of doing something with the Predator for this one. I also wanted to take it a step further. Instead of just doing an alter based a hundred percent on the character, I wanted to tie in an element of the old Slivers, which I really liked (I'm warming up to the evolved-looking ones, though). So, my idea was to create a classic-looking Sliver that resembled the Predator. I mainly used the Predator's faceâwith the grotesque and terrifying mouth I thought was signature to that monsterâand the claws, which I intended to have resemble the huge blade the Predator had on one of its arms, fashioned in the style of the Sliver's arms, all with the snakelike body of the old Slivers. I felt those elements combined would make for great flavor and a cool concept of the Predatory Sliver. 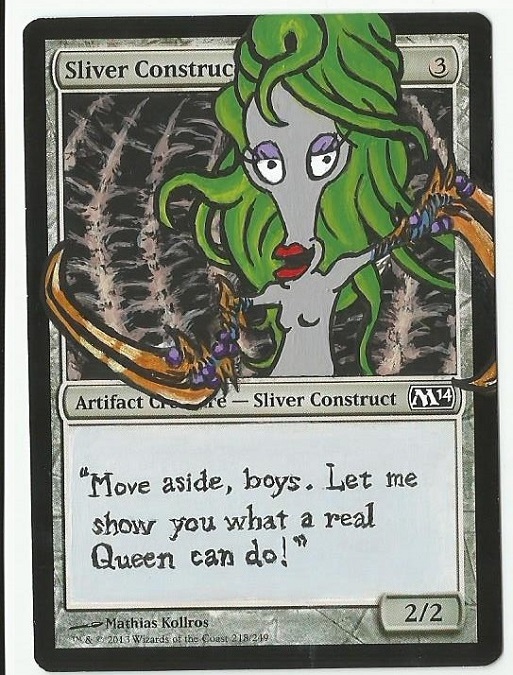 To Whom It May Concern,

This entry depicts the character of Roger from the popular American Dad cartoon. He has adopted Sliver Queen as the latest in his long line of costumed personas (complete with the Manaweft Sliver tentacle wig). His famous, campy enthusiasm notwithstanding, he clearly isn't the real deal (any more than new Slivers feel like real Slivers). So, he is relegated to the state of a very pretentious Sliver Construct: an artificial Sliver. The alter was done on a Magic 2014 Sliver Construct card with acrylic paint. 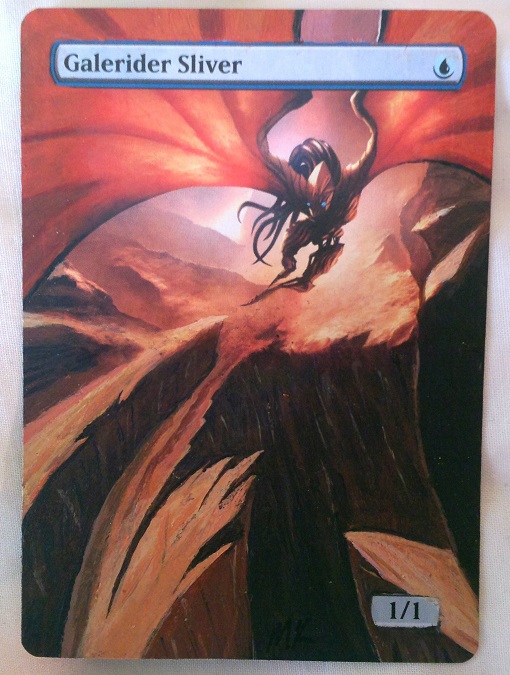 Last week, when I was packing for vacation, I was trying to decide how exactly I was going to kill time at the lake. Soon to be sixteen hours away from home with no Internet, varying cell service, and no one to play Magic with, I decided to fill a spare deck box with a handful of cards that I would enjoy altering. I thumbed through a stack and tried to pick out cards that would challenge me.

Three days into the trip, the sixth GatheringMagic ARC was posted. I thumbed through my stack to see if I had any Slivers, and lo and behold, Galerider Sliver was staring back at me. It was practically destiny. 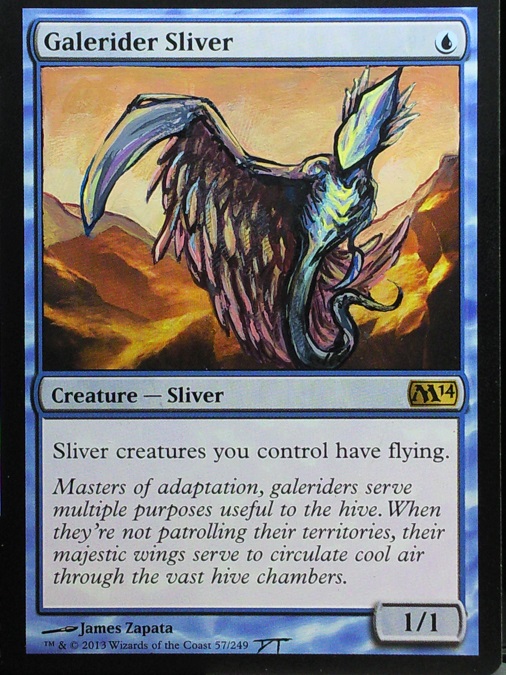 Altered using golden fluid acrylic paint, this is a reimagining of what I think a Winged Sliver looks like. Painted on a Galerider Sliver; original artist: James Zapata. 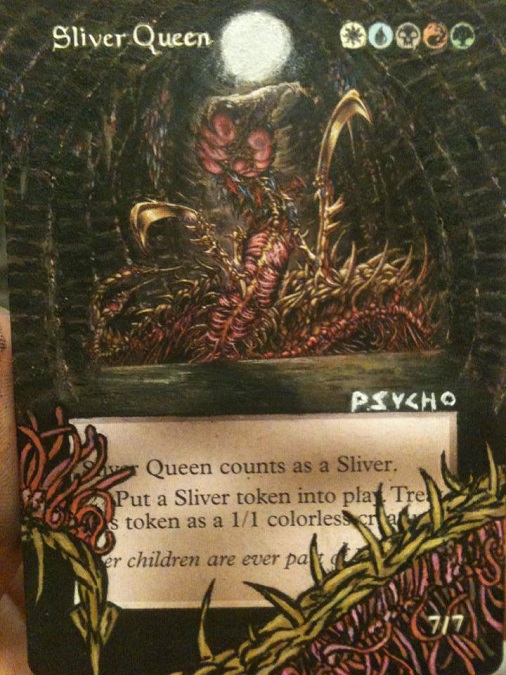 The alter is painted with a thin layer of acrylic paints. It took approximately four to five days to complete. 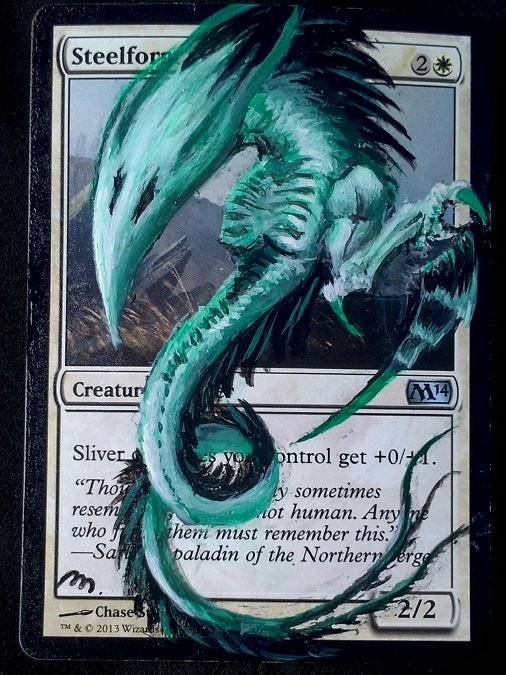 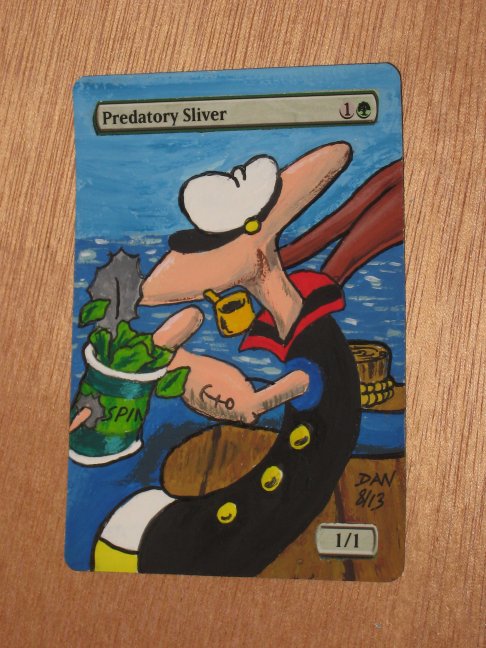 This is gouache paints on a Predatory Sliver card. 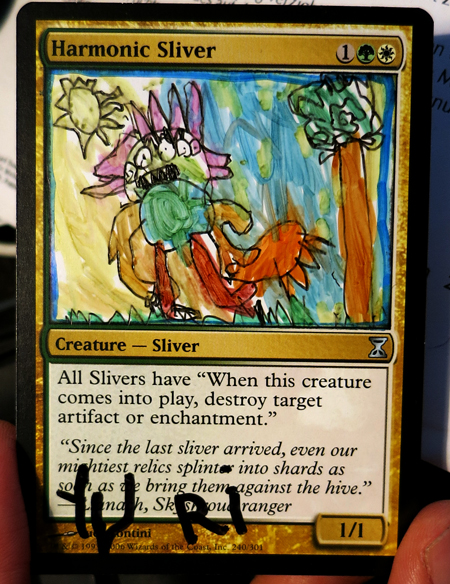 Iâm happy to see the altered reality challenge back! I hope youâll bend the rule that "Your entry must be your own. No entering on behalf of others." Because the card Iâm entering is made by Yuri, my four-year-old son. I asked him whether he wanted to take part in a contest in which he had to draw a monster, and he was very excited to do so. I shoved him a picture of Sliver Overlord, and that is what he made from it.

If he wins, he wants to spend it on Star Wars stuff. 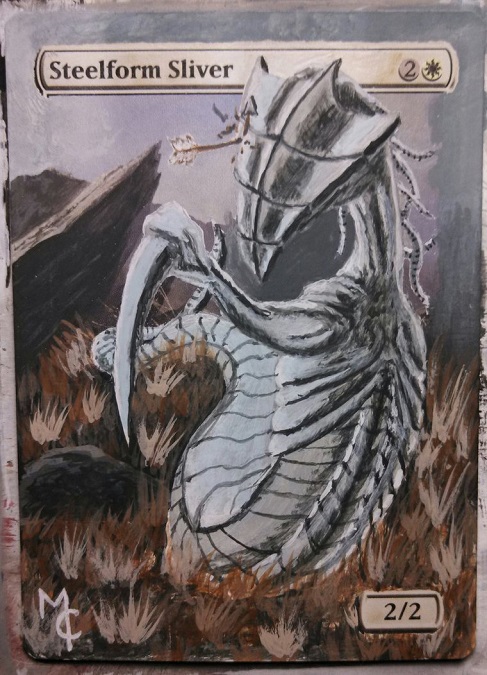 Here is my submission for the ARC. I chose to alter the new Steelform Sliver to make it look like a âclassicâ Sliver. To demonstrate the Sliverâs ability, I painted an arrow breaking on its head. This was a fun alter to do. I went with a textless, super-art version to showcase the Sliver, and I also incorporated the existing background. 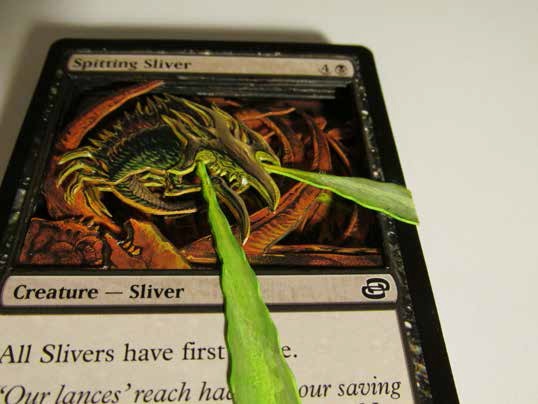 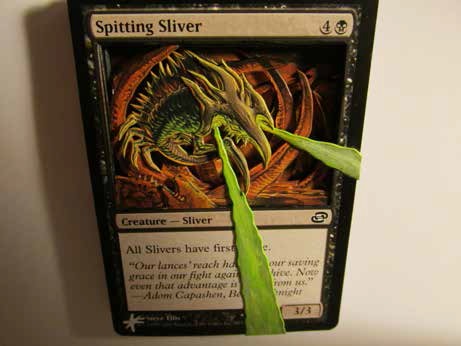 My name is Lindsay Burley. I have been doing 3D alters for almost three years now. I travel the country with my work, mostly to StarCityGames events. The Spitting Sliver that I have submitted is a combination of extensions and a 3D alter. I used acrylic paints to extend the spitting. 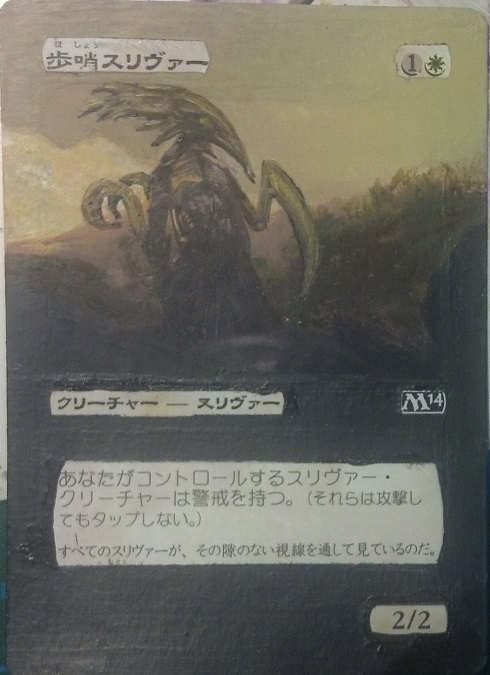 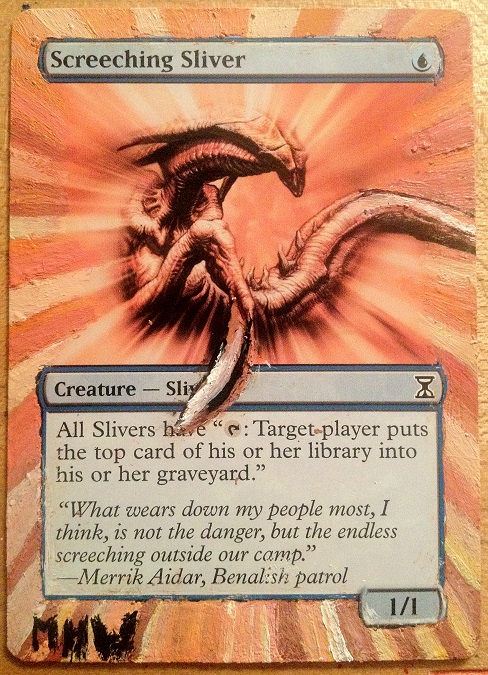 It's evolution, Baby! by Brandon Brown 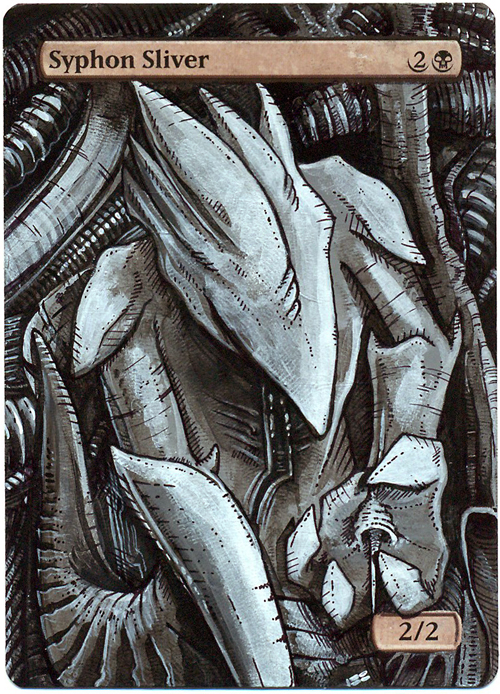 Description: The Syphon Sliver reworked to an old style sliver, discovering he has started to evolve. One of it's claws is now what resembles a hand with a more sophisticated syphoning apparatus.

I loosely based this concept on the Biomechanical works of H.R. Giger when I drew up my sketches. It is a black card, so I wanted the piece to be darker and on theme, and I thought all of the tubes and schutes really complimented the "syphon" aspect of this creature. 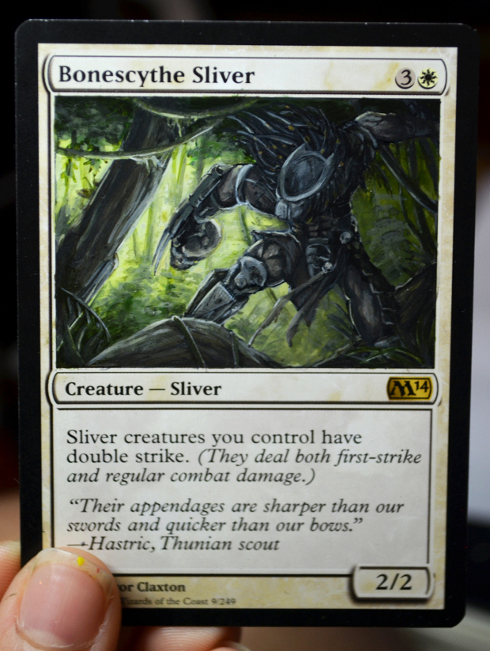 Description: Made with acrylic paint. Reference used from a sketch. I liked the art a lot and wanted to see a finished version if it.