It's a hard question with plenty of correct answers because a Cube is your own. There are other articles and series that attempt to define this universally, but from personal experience with Pauper, common/uncommon, rare, powered, block, and theme Cubes, "good" is relative to the experience the Cube's design is meant to create.

What I believe is good for Cubes is constant evolution. Cubes should grow and shrink, revisit and adapt as fast as the game updates. The principles that drive a Cube can change. Nothing should be an axiom left unchallenged by thought. The experience my Cube provides is "The Limited" experience of using two-for-ones, synergy, deck construction, and order of playing cards to push players to the bleeding edge of forty-card decks.

My Cube often does not mimic powerful strategies from Constructed formats or empower players to do the most broken things in the game. Players cast creatures and removal in a jockeying interplay to attack the opponent to death. It's primal Magic as we first felt it, though this time, nearly every card is solid.

Going into the Gatecrash update, there were some issues that were still outstanding:

Adding cards and reshaping the mana options were the only ways to achieve the results I wanted. It took a sixty-card update to make it happen:

What does this look like? Each section will feature a table showing the changes, followed by a description. Remember that you can always check the full Pauper Cube spoiler and switch over to âChange Logâ tab to see the entire update at once.

White was tweaked to support more aggression and evasion, but it was expanded to fit the G/W hexproof theme that has been introduced. Everyone's least interactive deck has a surprising contingent of cards at common. (See green for more details.) R/W's rushing can appreciate the opportunity to keep a creature around longer against removal.

Blue's changes are more complex than white's. The removal suite is generally an upgrade, but the creatures are judgment calls. Creating more evasion and disruption is powerful, but the efficiency of these new cards against the previous choices is debatable. And for whatever reason that I cut Looter il-Kor escapes me. That card's sweet for any Cube.

W/U and U/B will appreciate the additional bounce effects. Repeatable removal is the crux of working a good control deck for Pauper.

Black tightens up its themes of aggression and recursion, but it adds one of the few remaining ways at common to wipe away multiple creatures; Nausea will serve as a counter to Sprout Swarm and R/W's token swarming. (See Krenko's Command, Dragon Fodder, Raise the Alarm, Gather the Townsfolk, and more.)

Red moves another step further from midrange-type decks toward breakneck aggro. Paring down the 5-drops and replacing them with 3-drops (or less) streamlines the decks slightly.

R/W's deck identity hasn't been well-defined, but Dynacharge and Trumpet Blast are two ways to leverage a swarm of Soldier and Goblin tokens. Electrickery is one way for decks to answer these swarms. (See Nausea note above.)

Green is already a strong color, so these changes are to clarify the role of green in decks. Citanul Woodreaders helps dig and stabilize, something G/U will enjoy. Crocanura and Slaughterhorn replace overly redundant mana fixing. Silhana Ledgewalker and Sacred Wolf are obviously for the G/W hexproof deck.

Shield of the Oversoul

Adjustments to allied colors were minor (compared to the enemy pairs) and generally served as upgrades. Enhancing removal and spell options makes multicolored cards stand out against the creature-heavy monocolored choices. Shield of the Oversoul returns as a card for G/W hexproof.

To make it clear, each of the allied-color decks has a specific theme it follows:

G/W is the only theme that's changed. Instead of a generic "aggro" deck of average-to-good creatures, I wanted G/W to have a unique identity. Hexproof creatures seemed to be the most interesting choice to work with.

W/B receives an upgrade in flying with two removal spells for support. The goal of the pair is same as W/U, and it can use evasive creatures with plenty of removal spells to overwhelm an opponent faster than he or she can recover. Limited recursion gives this deck similar reach that drawing cards does for the other.

B/G already held an identity as a midrange deck, so these changes crank that another step. With recursion and well-sized creatures available, Grisly Salvage seems better than it may at a glance. This is one of the more suspect cards in the update, and I'll be keeping a close eye on it.

G/U is the color of the ramp deck, and these choices play well with going big. Frilled Oculus in particular is what surprises me here, serving as both an early defender against aggressive decks and as a late-game mana sink when attacking.

The role of U/R is a counter-burn-style value deck. These cards follow the idea through for an early play that gains value and a late play to recycle removal.

The small-creature rushing of R/W is already present with token makers and 2-drops in the monocolored slots. These additions are obvious support.

Equipment and mana-fixing are the features of colorless cards, but moving Gathan Raiders is something that was long overdue. I've never seen it cast for its colored mana cost.

The amount of change here seems daunting, but it's straightforward. Instead of a mix of Ravnica bounce lands, moving to include all ten aligns the mana sources of the Cube with the distribution of color in cards. Since the Guildgates are the next-best cycle of dual lands at common, including them is an easy choice. Mana, for Pauper Cubes, is straightforward now.

Are we talking about Dragon's Maze already? Since this update took me too long to spell outâthough the actual cards changed have been set for several weeks alreadyâwe're already halfway into the next set's previews.

It's actually great timing to be thinking about a Cube update. 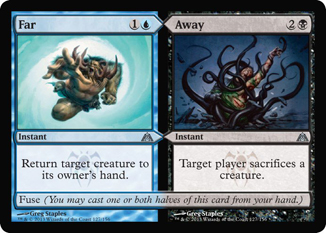 While rares, mythics, and the excellent uncommons are (rightfully) stealing the show, commons are the ones that usually excite me the most. My hope for a common fuse cardâsomething similar to former Cube standout Dead // Goneâis dashed by R&D's New World Order. (For the record, I agree that a common split card with a new mechanic on it would be extremely complex.)

But sometimes, commons slip through the preview wall and can stand on their own. Five cards that aren't Pauper Cube exciting were the Gatekeepers previewed my Marshall Sutcliffe in Limited Information last week. 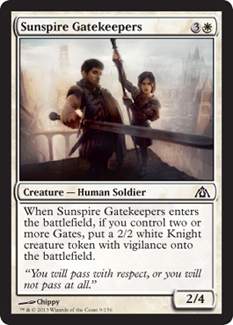 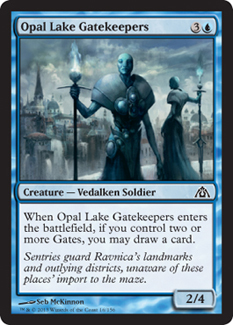 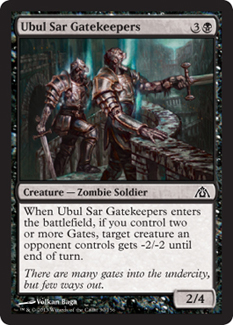 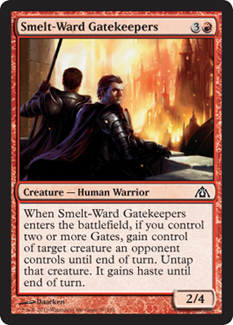 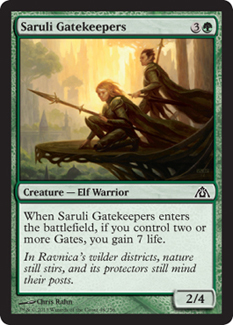 Drafting a heavily multicolored deck and picking up enough of the Guildgates will make a difference in Dragon's Maze Limited. For a Pauper Cube that's four hundred twenty cards, having two Guildgates in play at the same time won't be easy. Adding these to the Cube would be a trap: Players would expect to use their abilities but find themselves with 4-mana duds most of the time. 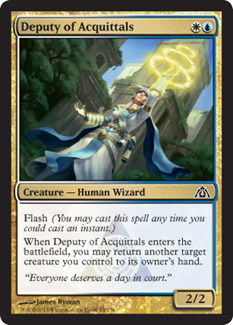 Now that guy, as seen in the Dragon's Maze mechanics article, is something special. Hussar Patrol was just added to the Cube, but it may be coming right back out. Deputy of Acquittals is Whitemane Lion thatâs difficult to castâthough still just 2 manaâbut doesn't require another create to be in play. Flashing a 2/2 in for the same mana cost as most of the counterspells in the Cube is a fantastic deal.

If you need more reasons to add the Guildgates to the Cube, we have alternate art for all of them in Dragon's Maze. Just pick them up already.

In tying up loose ends that I've been staring at, one question I've received numerous times is, "Where can I buy your Cube?" It isn't practical for any site to carry my exact Cube as a purchase item at all times, but giving you a push-button solution to grab most of it in just a few clicks is something I can do.

See you in a few weeks for the Dragon's Maze update!