It isn't just that I love the flavor of the set. In a way I fell in love with fairy tales all over again when I was in college and I had the great fortune to take a class on fairy tales. One of the most intriguing things I learned was a bit of the Aarne-Thompson-Uther folklore categorizing system, which made so much more clear just how grand and far-reaching fairy tales were in our culture, and which also elevated my opinion of "Bluebeard's Egg" into my favorite fairy tale.

Taking on the fairy tale in a Magic set feels just lovely. And, furthermore, one thing that I'm deeply enjoying is that it looks to be a massive departure from the Grand Enemy arc that we've had in a lot of our most recent sets. Whether it was the Flying Spaghetti Monster or Nicol Bolas, I was just a little tired of the storytelling stakes seeming so high in a set; it is nice to seemingly be in a world of small story after small story. While there are still more cards to see before the full set is spoiled, my initial take is that the world of Throne of Eldraine (or the plane, if you prefer) is so layered with small stories that naturally interweave that it doesn't even need a bigger grand narrative to feel rich. I love it.

One of the things that I've found exciting was seeing a few cards that feel like they have enough going on that they'll perhaps be able to make it into older formats, right away. This is no mean feat - Modern has a high barrier to entry, and so even getting in a marginal Modern card is impressive, especially if the card doesn't feel overwhelming in a smaller format like Standard.

There is a card for Modern from every color of Eldraine and more... here is one of each!

Let's start small - with an Elf!

One of the realities of the Modern Elf deck is that it can make an incredible amount of mana. Sometimes, the deck really doesn't have enough to do with it, and while Ezuri, Renegade Leader is a great outlet for that mana, running too many Ezuri can certainly result in awkward "Ezuri-flood".

Wildborn Preserver would almost certainly just be a single copy in Elves, should it find itself in the mix, instead of a third or fourth Ezuri. Running more copies would run it afoul of the diminishing returns of the card, even if a Wildborn Preserver can pump up another Wildborn Preserver as an instant, should you have the mana about. While it might on rare occasions rip a flier from the sky, mostly it would be useful as a card to help push damage, or when a single big creature is otherwise useful.

For the Devoted Druid/Vizier of Remedies combo decks, this card is basically worse than another Walking Ballista, but if you're running all four Ballista, I could see Wildborn Preserver making an appearance, especially in decks where its mana cost can matter (Chord of Calling/Collected Company builds).

We've all gotten very used to this little card in Modern:

Stoneforge Mystic makes every piece of equipment become something we have to consider.

Well, add this one to this list of actual, real rewards for playing Stoneforge Mystic:

One of the big issues that can spring up for Stoneforge Mystic decks is chump blockers. Whether it is with a Sword of Fire and Ice or many other options, actually connecting is very important. This issue was such a big deal, for a short while, very long ago, I would occasionally have a copy of O-Naginata in some of my decks, especially if there wasn't a Sword of What and Ever that I was looking for in that specific metagame.

Embercleave will be very good at making an equipped creature connect. Hell, in some instances, it will just mean the opponent dies. The fact that it attaches to a creature when it comes into play is very meaningful, because you can either cast it at flash or put it into play with Stoneforge Mystic, and your opponent may be forced into very poor blocks to avoid dying.

This card is good enough that I think it might be on the list of equipment to consider when you're building Stoneforge Mystic decks in Legacy, provided they can make the Red mana.

This is one hell of a sword.

It's not often you have a card that has a drawback that you might be looking to take advantage of, but for Sound Intrusion, that's definitely the case. 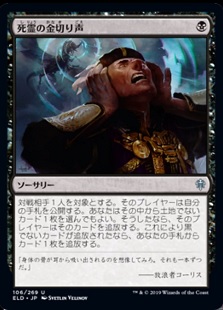 Target opponent reveals their hand. You choose a nonland card from it and exile that card. If a nonblack card is exiled this way, exile a card from your hand.

Not powerful enough as a hoser to really be a card you'd lean on in your sideboard in Modern, it is powerful enough that I can absolutely see using this card maindeck because of another very powerful card:

Sound Intrusion makes it a lot more reasonable to be an Ensnaring Bridge deck. As anyone who has played discard and Bridges knows, it can be very common that you are simply not emptying your hand fast enough. Sometimes this means hitting yourself with your own discard, which, while effective, can be an issue if you're in the situation where you really still need to be affecting the other player's game plan.

Still, you really don't want to be losing this much card advantage very often, so this card feels unlikely to be played in more than one or two copies in Modern, but that's still impressive. Remember also that if you are otherwise empty-handed, the drawback is meaningless, as it is not a cost to play the card.

Outside of taking advantage of the disadvantage of the card, exile is an important word to take into consideration. The graveyard might not be the best of places for a card you want gone for good, and so Sound Intrusion has more going for it over Thoughtseize than just not paying two life. In addition, it is not unreasonable to actually see a decent amount of Black on the other side of the table in Modern right now: Smallpox has had some real successes lately, so a turn one/Game 1 Sound Intrusion not only might not have a drawback, but it could take out a Bloodghast if you're particularly lucky.

I expect that usually I won't have this card in my Thoughtseize/Inquisition of Kozilek decks. However, if I'm working on a deck that uses those cards and also employs Ensnaring Bridge, should I notice I'm still really struggling against the fastest decks, I expect I'll look to Sound Intrusion as my solution.

Up next, we have a Merfolk I don't expect to see much play in Merfolk decks, Emry, Lurker of the Loch.

Emry is certainly playable in any deck that is making massive use of artifacts. However, the most artifact-heavy of these decks, Affinity, isn't really a great home for a card as ponderous as Emry. However, we do live in a universe where there are plenty of ponderous artifact decks out there - thanks, Urza, Lord High Artificer!

Emry is a natural fit into Thopter Foundry/Sword of the Meek decks of all kinds, as well as any other artifact deck that is using disposable artifacts like Chromatic Sphere, Pyrite Spellbomb, or Mishra's Bauble. In combination with Goblin Engineer, it really feels like you could very much start really grinding things out in an impressive fashion.

Outside the realm of Whirza-style decks, Emry can combine with Mindslaver to end a game for good, making it worthy of a thought in a Blue Tron deck as well. This, of course, can also make other common cards in Blue Tron all the more valuable, be they Expedition Map or Walking Ballista.

In addition, Emry, Lurker of the Loch is just a great card to help an artifact-heavy deck recover from being knocked around a bit by anti-artifact cards. From the sideboard of any Blue-based artifact deck, Emry will have to be in the mix for consideration, especially given that certain cards that are more typically found in sideboards (like Tormod's Crypt or Spellskite, e.g.) can mean that there are even more valuable things to bring back again and again.

I think this card will make a clear splash on day one. 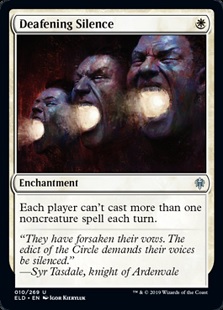 This card is so good, it is going to affect Legacy.

In Legacy, Death and Taxes, Maverick, and other White-based decks that don't have access to Blue can deeply struggle with combo decks. No Force of Will often means that you are simply at the mercy of luck when it comes to playing against the most explosive decks. Unlikely solutions have been attempted over the years, from Ancient Tomb and Chalice of the Void, to Mindbreak Trap, and more, but none of them are particularly effective.

Ethersworn Canonist is an absolutely reasonable solution, but at two mana, there are many games where it comes late to the party. Worse, as one of the only solutions, running out extra copies of Ethersworn Canonist because you've drawn them often doesn't help, as you run into Echoing Truth. It is also rough going to watch the Ethersworn Canonist not stop several plays of fast artifact mana on a critical turn.

Running multiple copies of Leyline of Sanctity can make it more likely you'll have one early, but again, those extra copies can bite you if a game goes long.

Deafening Silence is fast enough to get into a game in time versus combo, and powerful enough that you could choose to run it even versus non-combo decks. As a supplement to other hate cards, it feels incredibly perfect, especially since it will only barely interrupt your own plays, unlike a card like Containment Priest or Chalice of the Void.

I don't have a copy yet, but it will definitely be in my Death and Taxes sandbox.

Everything that I've said about this card for Legacy absolutely applies to Modern, for any White deck looking for another tool like this. While it isn't as useful because the smaller card pool means that threat is relatively smaller in Modern, it will certainly be a staple choice for sideboards.

Finally, one last card that I noticed may be a surprise to you all:

In a lot of ways, this card plays out very much like any of the other "Lord" style effects you see in decks like Elves, but the differences are really relevant. As a card that is immune to creature-kill, you aren't putting as much at risk when you drop Heraldic Banner into play versus a more controlling deck. In addition, the extra mana can be quite relevant in deploying out quickly.

Most of the decks that come to mind that might make use of this are tribal: Elves, Goblins, and Merfolk are first thoughts. However, token generation at large is also worth thinking about, and Goblin Rabblemaster/Legion Warboss can benefit from the card, and it combos well with heavy-mana cards, so the Mono-Red Prison deck might also find it useful.

Of all of these, the deck that most sounds like it might be a real fit is Merfolk. Being able to drop a pseudo-Lord in the form of Heraldic Banner and then have up Spell Pierce as well sounds great.

This set looks absolutely amazing so far, and I can't wait to sink my teeth into it completely once the whole set is spoiled. I'm excited to be playing the Pre-Release event at Misty Mountain Games in two weeks, where I'm sure I'll be making new Magical tales to tell!