Join me to celebrate the most flavorful cards of Fate Reforged. We'll treasure the fantastic story told through game mechanics, flavor text, and card names. As a Level 20 flavor judge, I'll have to issue a few warnings for offending flavors. I will point out how cards could've been concocted differently. Then, I'll announce the top three flavor winners of the set. 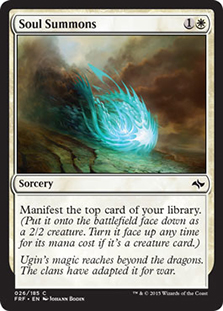 This card has well-written flavor text, but it's more than the seasonings that make a stew. The richest flavors begin with game mechanics. Manifest tells us the story of how the khans adapted the dragons' power for their own later use in morph. As an ability, manifest feels more chaotic and less evolved, placing us far back in the history of Tarkir.

Wizards promised us a middle set that interacted with each of the large sets uniquely. Manifested creatures can morph into play for less than their mana costs. I wonder how our play experience with manifest will change in Dragons of Tarkir, where morph never was developed by the khansâbecause the khans never were. The times, they are a-changin'. 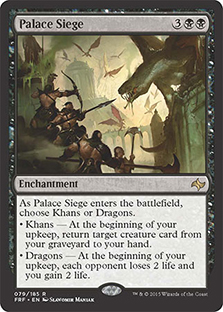 In Palace Siege, the Sultai warriors defend their Opulent Palace from Silumgar, the Drifting Death. We expect nothing less of the Sultai khans than exploiting the dead. The dragon life-draining mechanic brings to mind extorting money, the very sort of ruthless tactic that the later Sultai clan adopts. They were shaped by the foe they defeated.

On Frontier Siege, the dragon flight-fight mechanic is especially flavorful. Swooping is good, if you're the twenty-ton flying juggernaut with claws. The draconic choice of Outpost Siege synergizes with the devour mechanic on hellkites of yore such as Dragon Broodmother and Prossh, Skyraider of Kher. 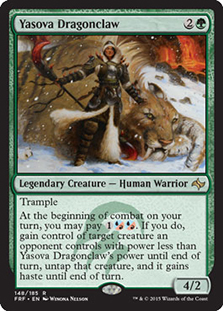 Speaking of old abilities, hybrid mana symbols tell a tale by themselves. The primitive clans haven't specialized into three-colored gold cards. Yasova Dragonclaw's power feels right. She's strong enough to domesticate anything with lesser power. It's just as flavorful on Old Man of the Sea. The difference is that he was a terrifying old djinn, while Yasova has an adorable kitty. 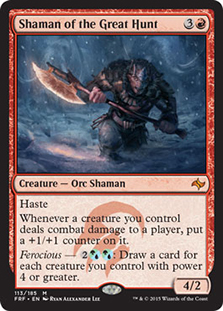 Never before has an Orc looked epic enough to be the main character of a three-novel saga. The composition of this art by Ryan Alexander Lee gives me wintery chills, with a herd of mammoths following the shaman's charge. Nothing says high art like tusks.

The shaman inspires with ferociousness in another flavorful hybrid ability. Each successful hunt brings more meat and +1/+1 counters. He leads the others to the kill with haste. 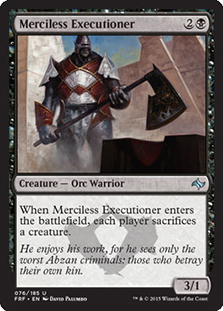 This is a functional reprint of Fleshbag Marauder, but whereas the Zombie killed creatures on both sides due to hunger or pestilence, the executioner does so out of judgment. He beheads the guilty even among his friends. His flavor is better than the Zombie's (to no one's great surprise).

The flavor text expresses an important concept, but I wish it could've been written with more power. Something like:

They say he dulls his axe before beheading Abzan traitors. Their deaths need not be quick.

Once, we had to satisfy ourselves with dragon bones. Turning back the clock allows us to participate in Ugin's designs. By playing the card, we learn that the Spirit Dragon willed his scaly brethren into being. 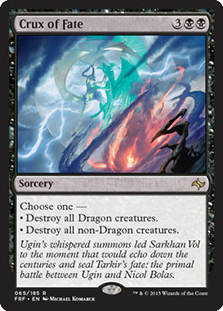 The text âChoose oneâ perfectly represents the storyline of Fate Reforged. This is the tipping point. The destiny of Tarkir hangs in the balance, on the choices we the players make. We are unto gods. This mechanic allows us to choose our own adventure. I, for one, choose dragons.

Crux of Fate builds the story of Tarkir with thunder and fire and flavor text. Look at how much we learn from the italics:

This card jams most of the set's story into a single text box. Thatâs an impressive feat, but I question if it was necessary. The flavor text didn't need to restate the idea that this one moment would decide everything. The powerful card name already succeeded there. Naming the dragons might also have been unnecessary, as they can be identified in the art. The flavor text could have explored something shorter and more potent:

Two dragons, one battle of thunder of fire that would echo across the centuries.

Alternately, the flavor text could have added insight into why Nicol Bolas attacked.

"Kill me," Ugin said with fire and thunder, "and you'll doom more than our dragon kin. The Multiverse will shatter and quake."

Flavor text does more than grant back story. It can explain why a card has the abilities it does, which will in turn help us remember the game text and improve play. 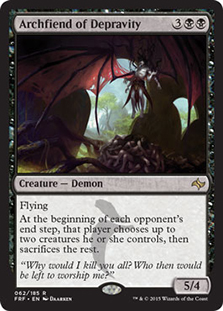 Why would this monster kill some of your opponent's creatures and leave others alive? Why, itâs out of sadistic vanity.

Sometimes, card abilities need no explanation. In such cases, all the flavor text has to do is kick ass. 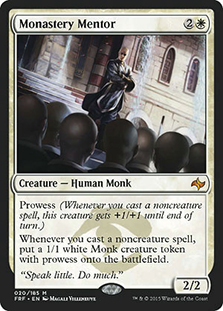 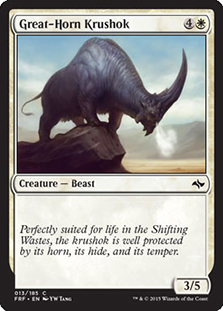 I'll go on to discuss the card's flavor text, but we all know that it's just an excuse to feature dat horn. Congratulations to artist YW Tang. Never has Siege Mastodon looked so epic. Shuhei Nakamura is no doubt shedding a single tear of pride.

Vanilla creatures are fun to play with because of their simplicity. More is often less. This flavor text could take that maxim to heart and shed the first phrase.

The krushok of the Shifting Wastes is well protected with its horn, its hide, and its temper. 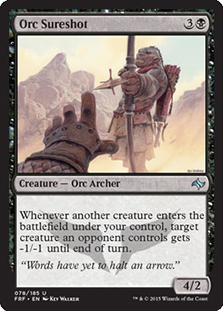 The powerful flavor text complements the brutal art and gives insight into the Mardu philosophy, which includes a hatred of philosophers. 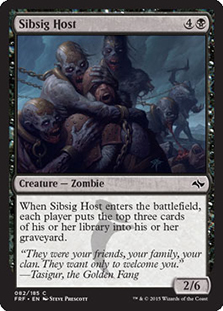 Tasigur, the Golden Fang is one evil, banana-hoarding bastard. This flavor text is perfect.

Let me also give due commendation to the flavor text of Bathe in Dragonfire, Battlefront Krushok, and Feral Krushokâand what cheeky cleverness in the italicized flavor of Archers of Qarsi. 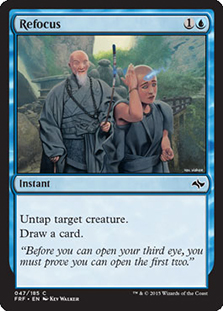 Card names with a single word tend to be the most powerful and memorable. Refocus does its word proud with intuitive game mechanics, and the package is bow-tied together with strong flavor text. The phrases end on the key words "eye" and "two," and it captures the tone of the art. 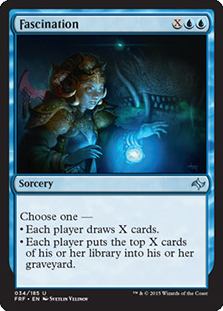 I welcome another single-word card name to the lexicon of Magicâwell chosen. May it captivate and inspire Commander players the world over. 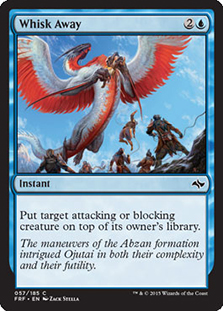 Whisk Away makes strong use of a well-known phrase. Previously, we had to stumble over saying, "I Griptide'd his creature." We may be referring to the top-of-library effect as "whisking away" opposing creatures for years to come. I also like how the prey has to leave its protected strongholds and expose itself before the dragon can execute the swoop. 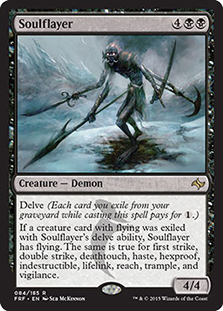 What a chilling name and delightfully horrifying art. When I'm camping in the mountains, I don't want to see black patches where the snow has melted from the ember footsteps of this Demon. We've had this kind of grave-born abilities before on Cairn Wanderer, but the delve mechanic better implies the idea of draining the dead of their skills. Stitcher Geralf should take note. Soulflayer has no flavor text, and I thank Ugin for that. The card name tells me more than enough. 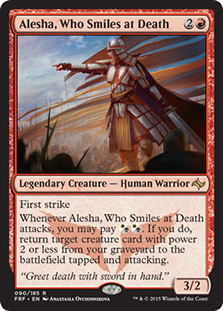 The army races forward into battle, and as they take mortal wounds and begin to topple, Alesha calls them to fight on. Her card name is both beautiful and strong, giving us a sense of her character. Her flavor text doesn't match the same pitch of battle glee, but the line does hint at the guttural form of Mardu speech by leaving out the "a" before "sword." Itâs subtle, but strong. 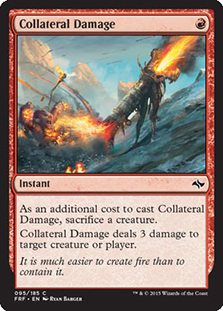 This is a well-known phrase aptly given to what might be a well-played card. Every element on the card works together to burn a pure concept into our minds. I regret that I can find fault with the flavor text. The concept is strong, but the sentence begins and ends with the weak word it. A counterexample would be:

Fire is easier to create than contain. 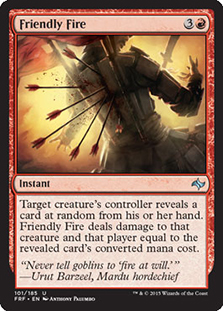 The business with revealing a card in hand might represent the randomness in war, but if I'm inducing the misfire on my opponent by casting this red spell, I don't see the need for it. That said, I do like the idea of a creature in the hand shooting too early and hitting an ally directly in front of it in play.

The reference to goblins in the flavor text is a fine tribute to the randomness of the cardâgrin-worthy for certain. 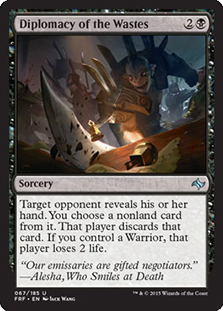 Take a moment to appreciate the understatement. The card could've been titled Coercive Force, but instead, we see the humor of Alesha. Never has sack-and-ruin been so fun! 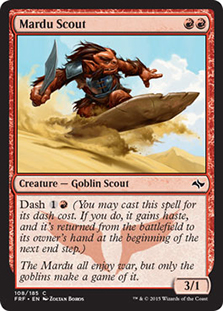 There's nothing wrong with the card name, game mechanics, or art of a goblin surfing. I'd argue there's a lot right with them. I rule in favor of goblin glee. But the flavor text falls flat. It restates the obvious, missing the set's big opportunity for humor. 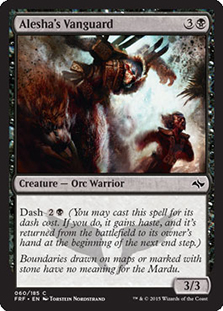 Hereâs a creature that references Alesha, Who Laughs at Death but that cannot be resurrected by her ability. 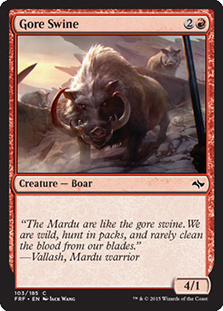 As much as I want to be pro-piggy, the long-form flavor text doesn't pay off the reader. No expectations are teasingly defied; no deeper insight is gleaned; no chuckles are had. And the comparison fails on logic, too, because boars don't have "blades." Not every piggy can be a Bladetusk Boar. Ending with the word "weapons" or "teeth" would have worked better. 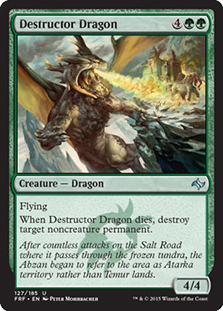 "Destructor Dragon" is an interesting choice for the card name, especially when something like Acidblood Dragon was availableâor Deathdive Dragon or Spitetail Dragon. I would've liked the flavor text and card name to justify the unintuitive ability of why killing a dragon causes it to destroy a permanentâneither offers a clue.

I needed to rinse my mouth out with baking soda after that one. Had to be ready to announce the tasty triumphs of the top three flavor winners, and then my review for Fate Reforged will be over. If you want to indulge further in the set's art, look for the illustrious review by Mike Linnemann. For more depth on the story of khans and dragons, the review by Ant Tessitore will be a multi-layered bean dip of Vorthos goodness.

Second Place, with Most Flavorful Mechanic

Shaman of the Great Hunt || @ryanleeart

The rulings of a Level 20 flavor judge cannot be appealed. However, feel free to comment about which cards tasted best to your (uncertified) palate. I can also resolve any flavor disputes.