There are over thirteen thousand cards in Magic, and you chose one with terrible flavor. Donât just throw bomb after bomb into your casual deck. Instead, garnish the applause of your fellow players with discerning choices. In this weekly column, Level 20 Flavor Judge A.E. Marling answers your urgent questions concerning style and panache in Commander.

Infect Creatures in a Knightly Deck

Judge, one guy in my playgroup keeps one-shotting us with infect creatures like Putrefax. He gives them double strike with his commander Rafiq of the Many. Is this flavor-legal?

As you suspected, the grinding cacophony of Phyrexiaâs poisonâgrease wheels clashes with the chanted vows of a Rafiq of the Many deck. In addition to this flagrant flavor violation, a gentleman never plays infect in Commander. If you insist on reprocessing your foes into the metal unity of Phyrexia, at least instigate a house rule that 20 poison counters are required for victory in Commander.

My judgment is that the offending player is suspended until he gains a better perspective. He must freshen the chamber pots of a castle stricken by a cholera infection while singing the Phyrexian national anthem, Metal Militia.

Alternatives to Putrefax: Have Rafiq man up and kill your enemies himself with Enlarge (kitten flavor bonus), Might of Oaks, Strength of Cedars, Chorus of Might (best flavor), Elspeth, Knight-Errant, Stonewood Invocation, or Tower Above. And thatâs not even mentioning any enhancements or artifacts.

How Many Eldrazi Are Too Many?

In the podcast The Command Zone, guest speaker and Vorthos writer James Pianka mentioned that he uses Spawnsire of Ulamog as a win condition in his mana-hoarding Kruphix deck. James Pianka would cast only a single copy of each colorless Eldrazi card from outside the game, as he was uncertain if bringing in multiple free copies would clash with the singleton spirit of Commander. Well, this is the place to find certainty in flavor and unquestionable rulings in casual formats.

I believe this passage from the Comprehensive Flavor Rules will clarify the situation:

âThough a Commander deck may include only a single copy of any one card, a Commander player may still own multiple copies of any one card. If any effect, such as Spawnsire of Ulamog, gives the option to cast one or more cards with a single name, the player may do so for common cards such as Ulamog's Crusher. For uncommons, such as Pathrazer of Ulamog, two copies may be cast ifâand only if they have distinct, variant art from each other. Rares and mythic rares must be limited to one copy each. Also see rule 711: James Pianka Is a Sick Tyrant of Worlds.â
âCFR: 137.3b

If your opponents allowed you to amass 30 mana, they didnât counter the Spawnsire, and they neglected to Trickbind the activated ability, they deserve to have their worlds eaten by a legion of annihilating colossi. Likewise, if you activate the ability, it is your duty to flood the table with 8/8 and 7/7 common Eldrazi. Placing fewer than twenty Eldrazi into the play space would be grounds for receiving a Flavor Warning. Let your foes look on your colorless ocean of plane-shaking minions and despair. Or cast Cyclonic Rift with overload. They could do that, too.

Some might question the flavor of placing an Eldrazi Spawnsire in a deck belonging to a god of Theros. If it were any other god but Kruphix, itâd be right out. I may be a Level 20 flavor judge, but even my immense intellect cannot fathom the God of Horizon. Kruphix works in mysterious ways, and who am I say that sometimes those ways canât involve continent-groping tentacles?

Judge, I want to build a Jhoira deck with a heavy instant-and-sorcery theme. I suspend huge spells, and when they fire off, I have mana available to copy them with Increasing Vengeance and protect them with countermagic. So the deck feels very Izzet. Can I also have Skyscribing in it even though thereâs an Azorius symbol in the art?

A card that detains, like Isperia's Skywatch, would have no place in Izzet colors, but Skyscribing earns special consideration, first because it fits the instant-and-sorcery theme, and second because the forecast ability resonates well with Jhoiraâs upkeep-incoming ability. You could choose the Skyscribing from the original Commander set, which has no Azorius symbol in the art or textbox as a watermark. The art is less detailed but still wondrous. It also is free from a flavor-text quote from that joyless Isperia. She has a riddle stuck up her butt. 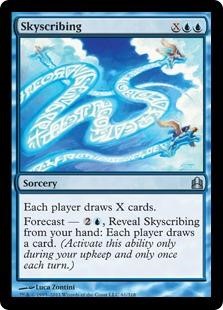 This may be your best option. However, I see from your decklist that you have not yet included Prosperity.

For an Izzet deck, your best flavor option would be Prosperity from Commander (2013 Edition), with the flavor text written by our very own Vorthos Magic writer MJ Scott. The other options are also reasonable. The original Prosperity from Visions mentions clean robes, which would be a large consideration when your esteemed colleague is steamed in his own goblin sweat, as in Goblin Electromancer. And if you can find it, the Portal Prosperityâs art by Phil Foglio matches the color abandon of Izzet mages, and the flavor text is perfect.

You can only go wrong with the Sixth Edition of Prosperity, as it has a white border. I issue automatic warnings for all cards with white borders, with exceptions made for Revised and Unlimited dual lands.

With inexpensive alternatives to Skyscribing, there is no way to justify playing a card with an Azorius aftertaste in a deck with Izzet colors. However, Iâm downgrading the violation because I cannot object too strongly with my hands full of group-hug cards.

Alternatives to Skyscribing: Original Commander edition of Skyscribing, Prosperity, Minds Aglow, or Time Reversal. The last one would be strongest coming off Jhoiraâs suspend. With all your mana available, you could use the cards first.

Can a Vampire Hang with Daywalkers?

Judge, I want to have Melek, Izzet Paragon and Talrand, Sky Summoner in my Jeleva Commander deck, but my friends keep telling me that the other legends would not work with her because sheâs a vampire.

However, Melekâs electrosyphon heart only beats with energy, and merfolk blood tastes like mint toothpaste. Melek and Talrand are both legends, and they could be commanders in their own right. They would not Bella-Swan-swoon over a vampireâs wiles. They could never be Jelevaâs minions.

But they could be her colleagues. A Planeswalker could reasonably bring Jeleva to different worlds, and she would wish to seek counsel from other wizards. They might not even realize theyâre dealing with a neck nibbler. Since all three wizards care about casting instants or sorceries, they couldâve met at the same arcane symposium. They may not approve of each otherâs methods, but thereâs a little thing called professional courtesy.*

* Professional courtesy dictates that you turn a blind eye to the first three bodies you find drained of blood in your colleague's officeâas long as theyâre promptly disposed of and the rug is dry cleaned.

Coat of Arms in the Sliver Horde

Judge, is it okay to play Coat of Arms in a Sliver deck? The card was in Premium Deck Series: Slivers, but it has goblins in the illustration.

This is an excellent question that demands a challenging ruling. On one hand, Coat of Arms rewards synergy in a Sliver deck that puts a premium on creature symbioses; on the other hand, thereâs a gaggle of goblins. Although warty-green hands are holding the banner now, I could reasonably imagine elves or allies doing the same. The problem is that slivers have scythes for hands. Even if I allow them the anatomy from Magic 2014 and Magic 2015 (which I don't), why would slivers care about a Coat of Arms? Slivers would instill pride in each through pheromones, not crests.

Lest my discerning readers suspect me impartial in the case of this challenging judgment, I consulted the Comprehensive Flavor Rules, section 303, article 1c, which states, "The leniency of flavor rulings must be inversely proportional to the number of colors in a deck and the corresponding availability for card selection." So, as the potential for more flavorful alternatives increases with more colors, our standards for flavor must also rise. However, there is a passage in a later section of the text that may further illuminate the ruling.

And there you have it: No Coat of Arms in Sliver decks.

Alternatives to Coat of Arms: An ounce of human decency

Leave a comment with your flavor question, and A.E. Marling may deign to answer. For a more complete flavor analysis, include your decklist with your question. While hitting the submit button, raise your hand, and shout in a clear voice, "Judge!"