Happy New Year everyone! If the end of 2017 was any indication, Pauper is going to have a banner year. With support as a Sunday Grand Prix event and a recent glut of content from non-Pauper community folks, the format of commons is poised to take the world by storm. Or rather it would be if good Storm decks weren't banned from the format (for good reason).

But you're not here to read about that. You're here for the preview card, right? So let's get right to it. 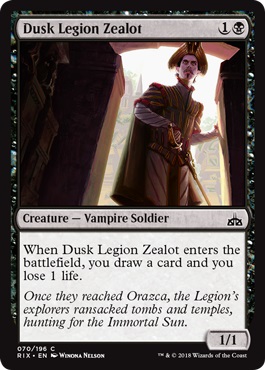 Dusk Legion Zealot is such an elegant card I'm surprised this is the first time we're seeing it. Two comparisons jump to mind immediately. The first is Phyrexian Rager. The Rager has been a Pauper staple since the format was still a player run event. A 2/2 that can keep the cards flowing, the Rager is a mainstay in Mono-Black Control. Mono-Black needed the Rager to see new cards but also to absorb blows early. Back when the deck ran Unearth, it was the perfect size to come back at a discount.

Phyrexian Rager's body does matter. A 2/2, while not impressive, is the baseline for creatures in Pauper. The inability to trade with cards like Burning-Tree Emissary matters and Rager, while slow, can do this. Dusk Legion Zealot cannot. While Zealot is cheaper, that comes with a smaller presence on the battlefield. As a 1/1 for 2 mana, bringing it back with Unearth is far less exciting but it does work better with Grim Harvest.

Grim Harvest is another long game recursion engine that is at its best with cheap creatures. You want to save mana when using this spell since the Recover cost of

The problem with using Zealot as an engine in this way is that Thraben Inspector exists. At one mana up front, Thraben Inspector works very well with Grim Harvest and another card that asks less in Kor Skyfisher. Inspector might cost an additional mana to replace itself, but it does not come with any loss of life and matches up with what Kor Skyfisher decks are trying to do.

So we've seen that compared to Phyrexian Rager and Thraben Inspector, Dusk Legion Zealot comes up a bit short. There is another card with which we can draw a comparison in Elvish Visionary. I think that this is the most appropriate analogue for a variety of reasons.

Aside from the exchange of health for a card, these cards are nearly identical in function. Elvish Visionary has seen play in Pauper Elves in the past and has been spotted in Standard when legal. The ability to develop your board while not going down on cards is valuable. Dusk Legion Zealot does this as well, only without the Elf creature type. But therein lies the rub -- Dusk Legion Zealot belongs to two semi-relevant tribes and could be a shot in the arm needed to push them toward competitive level.

First off, Dusk Legion Zealot is a Vampire. There aren't many Pauper payoffs for being a Vampire -- only Vampiric Fury and Vampire's Zeal. The former, from Innistrad, pushes you toward

. This would be fine except all the rewards for going wide with Vampires come from Ixalan, and they are all White. At two mana, Vampiric Fury can play well with Vampire Lacerater and Pulse Tracker, but then you are taking turn two to put out a 1/1 instead of something more offensive. No, if we are going to go for a Vampire tribal push, we should look to White.

Except, White doesn't have much to offer either. Legion Conquistador is interesting, but if we are going wide we will want a pump effect. White gives us access to a bevy of these but at the same time taking turn three off to draw multiple 2/2s is not very exciting. Of course Dusk Legion Zealot and Legion Conquistador share a second creature type in Soldier.

Here is where we start cooking with gas. Soldiers have gotten quite a bit of tribal support over the years. Gempalm Avenger is an uncounterable anthem effect that can also dominate a combat phase with First Strike. Veteran Swordsmith and Veteran Armorsmith can pump the team in tandem. The real spice in this mix is Ballyrush Banneret -- reducing the cost on all your Soldiers including Dusk Legion Zealot and Legion Conquistador. Zealot looks a lot better when it costs a single mana and Conquistador on two does a good impression of Squadron Hawk.

Dusk Legion Zealot could be key in making a

Soldier deck viable. Along with Thraben Inspector to keep the cards flowing, this deck could have access to Kor Skyfisher for re-buys and Cenn's Enlistment and Raise the Alarm to go wide. Loyal Cathar counts on both sides and Skymarch Bloodletter looks awfully nice at 2 mana. Add in some Harsh Sustenance or Foul-Tongue Shriek and you get a nice little aggressive deck that has the ability to steal games with Gempalm Avenger.

Soldiers is nice, but being realistic, Dusk Legion Zealot is more likely to enable a slew of midrange decks. Giving Black decks another option on turn two is important. Returning to Mono-Black Control and Phyrexian Rager, the standby has a lot of competition on turn three. Both Chittering Rats and Liliana's Specter fall at the three while Cuombajj Witches is the only real creature to fight for the right to party on the second turn. While both have their uses, Zealot is a better active play and it does work with long game engines like Grim Harvest and Font of Return. It is not that Witches is a bad card, but using that spot for Zealot frees up space on three for other disruptive elements. This could herald a return of Okiba-Gang Shinobi and unseat Gray Merchant of Asphodel from the top of the mono-Black curve.

Dusk Legion Zealot is the best kind of common. It is clearly a useful card that will see play in the format without being obvious. The addition of Zealot, and hopefully other cards from Rivals of Ixalan, will allow Pauper deck-builders the opportunity to flex their muscles to find the best use. One thing is for sure: if the Zealot is the herald of cards to come, then 2018 could really be the best Pauper year ever.