Login
0 Item
Advanced Search
Sign In
Create Account
Modern Masters spoiler season is always an exciting time for Pauper. Rather than looking at what new cards might get printed the common faithful scour old card lists for cards that have the potential to be shifted down in rarity. Cards like Gut Shot and Perilous Research have become format staples and with Modern Masters 2017 on the horizon the number of threads discussing what could and should be shifted down has grown exponentially.

Modern Masters is a chance for Pauper to get access to some effects that would normally fall outside the bounds of New World Order. The design philosophy is less about the strength of cards that appear with black expansion symbols but more about complexity. Cards like Prodigal Pyromancer are no longer fair game for common in most regular releases due to the number of options they create on a board. While Magic should not cater to beginners, the game should remain approachable and adding too many complex cards at lower rarities can lead to overly convoluted board states in Limited. The result may be brain lock and while that is a reality of the game it has to be carefully managed to ensure the phenomena doesnât repel new players.

So commons bear the brunt of this truth. Masters sets, however, are for the more entrenched player and as such have the ability to push the envelop. The cards â thatâs right, there are two of them â that I have to share with you today are not overly complex. They do not add to the difficulty of any specific board state. They are powerful and while they may not change Pauper as we know it they will help shape it for many seasons to come.

One of my recurring requests for Pauper is for colors outside of Blue to have strong filtering. While cards like Gods Willing, Ancient Stirrings, and Vessel of Nascency have made their way into Pauper the other colors are being regularly lapped by Ponder, Preordain, and so many others. Blueâs stranglehold on these cards means that it is the color best suited for sculpting draws, and in a format with so few forms of persistent card advantage the ability to Scry away chaff can be incredibly important.

The movement of Scry to evergreen should be a long term boon to Pauper. Giving other colors access to the top of the library will only help them keep up with Blue. My first preview card has some tough competition but should see serious play. 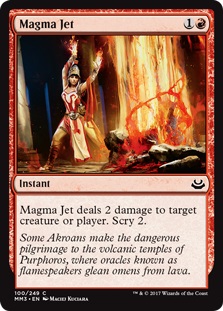 Magma Jet is a heck of a Magic card. While Lightning Bolt remains the gold standard of removal, Magma Jet will still hit a wide array of threats while setting up future draws. Since so many creatures in Pauper generate some effect when they enter the battlefield, trading one-for-one can be a losing prospect. The ability to modify upcoming draws will help the Magma Jet caster recoup some card equity. Itâs strong enough to see play, so where does it fit?

Magma Jet cannot be the primary removal spell in a deck. While a Shock is good enough to handle plenty it still fails to stop 3 toughness threats. As a result, the Fifth Dawn and Theros spell should supplement other removal, whether itâs Flame Slash or Lightning Bolt. The ability to dig deeper into a deck tells me that it will be best suited for slower, more midrange decks. Here the Jet will be able to filter away dead cards and help increase card quality over time. Condescend sees play in Murasa Tron as a way to fight early threats while finding key pieces. While Condescend scales and can seem lackluster without Tron online Magma Jet will be the same card on turn two as it is on turn ten.

Magma Jet will not be slowing down Pauper. At two mana it is rarely going to trade up. Instead it will provide a nice option for decks looking to keep up early and pull ahead late. My next preview does not care about the middle stages of the game.

Not even a little bit. 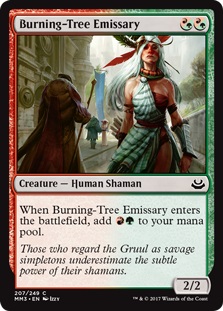 The Emissary will allow for some incredibly strong draws out of Mono-Green and Mono-Red aggressive decks. Nest Invader and Silhana Ledgewalker both see play in Stompy and curving Young Wolf into Emissary could yield another 2-drop of a combination of Skarrgan Pit-Skulk and Vault Skirge. Alternatively it could come down on turn two and fuel a Valley Dasher.

Okay, so maybe itâs better in Stompy than Mono-Red.

What excites me most about Burning-Tree Emissary is how it can help enable a R/G aggressive deck. These decks have suffered in Pauper due to the constraints of the mana available. The format lacks true dual lands so any two color deck needs to skip a turn to set up the correct colors. Emissary can enable both Red and Green 2-drops on any combination of Forests and Mountains while also granting access to a bevy of strong 2-drops.

Scab-Clan Mauler and Horned Kavu have impressive stats but the restrictive casting cost has kept both of them from seeing heavy play. If Emissary catches on it could mean a rise in Gruul decks leaning on these 3 power beaters.

Burning-Tree Emissary fits into the Modern Masters 2017 R/G draft strategy of âgo wideâ. The other archetypes are as follows:

These archetypes are fairly well defined and will need some strong support for limited. I can easily imagine seeing stronger enter-the-battlefield triggers for W/U and more Archaeomancer like effects for U/B â maybe Nucklavee gets the downshift? W/G is tough since so many of the Populate cards are already common but maybe some stronger token producers. B/R is exciting to me (because I love playing with dead things) but I am not sure if weâd actually end up with Shambling Remains, Hellspark Elemental, or Scourge Devil. Regardless weâll know more in a few days and I for one cannot wait to see if Pauper will get another Gut Shot as opposed to a Scion of the Wild.