Login
0 Item
Advanced Search
Sign In
Create Account
In college, I found Pauper Magic: a group of individuals who played tournaments using only common cards. As a budget-conscious Spike, I found a home. For the past ten years, I have been involved in the online Pauper community. The format still only uses cards available as common on Magic Online (although some paper groups make their own rules regarding legality) and has a small banned list. The official rules can be found here.

It should not be a surprise that I love Pauper. Why else would I stick with the format for the past decade, right? I relish in the challenge of competing with only commons and enjoy finding the interactions that make the metagame move. More than that, I get a kick out of being able to field every potential deck for a minimal investment. The fact that Iâm no longer in college doesnât mean my days of watching my bank account are over.

Pauper, like so many other formats, is defined by the mana available. While cards like Terramorphic Expanse exist, and the Ravnica-block bounce lands, Return to Ravnicaâblock Guildgates, and Khans of Tarkir block gain lands all exist and see play, but none of these enable what has long been a unicorn for the format: a playable, two-color, aggressive deck.

When the fixing is mediocre at best, the decks that are able to cast their spells in an optimal sequence have better chances at winning. Two-color decks can (and do) work, but the tempo cost of having a land enter the battlefield tapped is too much for two-color beatdown decks to overcome. This is a true shame, as being able to pair any color with the potency of Lightning Bolt would do wonders for people who love to turn creatures sideways.

There are some ways players have tried to mitigate this in the past. Cards like Flayer Husk and Vault Skirge do a fine job of wearing many colored coats. These two cards help to enable fringe decks that pop up from time to time but rarely ever linger long.

In order for a two-color aggressive deck to have a shot, it needs to be able to make an impactful play on turn one. It appears that Magic Origins may be providing Pauper exactly what it needs: 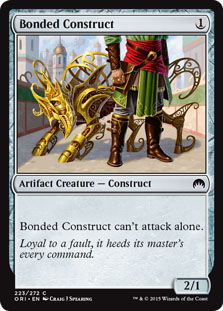 Okay. So, this is a 1-drop that can go in any deckâ.â.â.â

â.â.â.âIt really isnât a 1-drop. The clause that requires you to have another creature attacking alongside it means that unless you are going to be deploying something with haste on turn two, this Kaladeshi contraption is going to be staying untapped. Thatâs not the worst downside in the world, as Jackal Familiar (a 2/2 with the same ability for

And yet, thereâs the pedigree. A 2/1 with a drawback was a longtime staple of aggressive decks. Ever since David Price taught the world a lesson with Jackal Pup, these creatures have drawn attention. While Wizards has wised up and increased the power of 1-dropsâSoldier of the Pantheon, anyone?âthat was not always the case. How else would you explain both Goblin Patrol and Goblin Cadets making Top 16 of a European Championship or Uktabi Drake making it to the finals of an old-school Pro Tour Qualifier?

Considering Pauper does draw on this same history, it stands to reason Bonded Construct could see play in the common format.

Bonded Construct could find a home in either Stompy or Goblins. Both of those decks play enough 1-drops that it is not outside the realm of possibility to play a 2-power 1-drop on turn one and then follow it up with Bonded Construct and another creature. That being said, Goblins relies heavily on tribal synergy, and Stompy has access to some slightly better creatures.

Here, we have a very aggressive B/R deck that uses the Construct and Rakdos Shred-Freak. The flexible casting cost on Shred-Freak means this build is more likely to hit its drops on time. With burn cards like Lightning Bolt and Blightning playing backup, your creatures only have to connect a few times before burn range is active.

I think the best way to attack with Bonded Construct is to use its nature as an artifact. Boros Metalcraft already exists as a strategy residing in the outskirts of the format. The deck makes use of Court Homunculus, Vault Skirge, and Porcelain Legionnaire to assemble an offensive force based on being able to cast these creatures with white mana sources. The deck also can close out games thanks to metalcraft-enabled Galvanic Blast, making it rather easy to seal the deal.

There is one more deck in which I see an immediate home for Bonded Construct. Ever since Ben Stark won a Pro Tour on the strength of Squadron Hawk, Stoneforge Mystic, and Jace, the Mind Sculptor in Caw-Blade, Pauper players have been trying to make PauBlade a thing.

âWe have Brainstorm!â they cry as they put two copies of Squadron Hawk on top of their libraries. Taking that turn probably cost that player 8 points of life and precious time. But they did something cool.

The most successful versions of this deck do not try to mimic the potency of Jace, and they instead focus on leveraging Trinket Mage to help bolster their Birds. Flayer Husk and Bonesplitter are often included, and Bonded Construct provides quite a bit of power with the Fifth Dawn commonâ4 mana for 4 power.

Bonded Construct is poised to impact Pauper on Magic Online. A strong card in its own right, it shines when it is placed in the proper context. It can bridge archetypes and go just about anywhere. Sounds like a great card for a Cubeâ.â.â.â

Hi. This is Adam Styborski writing now. Alex and I have worked together on our respective Pauper Cubes for years, and this is one of those cards I find exciting. Alex made great points about the history of powerful one-drops with a drawback but there's a significant difference between Jackal Pup and Jackal Familiar: Bonded Constructed is colorless.

One of the features that's been difficult to implement is an aggressive deck that feels like the aggressive decks found elsewhere in Magic. Great one-drops that are the principal components of modern Constructed aggressive decks are now uncommon, rare, and likely mythics now too with the coming of Kytheon, Hero of Akros.

In my Pauper Cube, which is now in the throes of rebuilding at least two colors pairs (Sorry those expecting a Modern Masters 2015 Edition update!), adding a colorless, efficient attacker that costs just one mana is great. Alongside usual suspects like red cards with haste or white tokens, it presents a option for any aggressive deck for the first turn. That's what I like about it so much: It's flexible for any deck, but otherwise innocuous without committing a difficult card to a color.

It might end up a last pick-soon-to-be-a-cut in the future, but I'm excited to see where I'll fit it in to try it out. Experimentation is part of why cubes are awesome!