Happy Friday everybody! Today we will be going over some new and exciting rule changes to planeswalkers. We will learn what this new rule means overall and what to expect will happen from it in Standard, Modern, and Legacy. Earlier this week Wizards of the Coast put up in article explaining new Ixalan mechanics and the new planeswalker rule that will go into place when Ixalan is released. This is what they said:

Under the new rules, if a player controls more than one legendary planeswalker with the same name, that player chooses one and puts the other into their owner's graveyard. This means that if you control Jace, Unraveler of Secrets and cast Jace, Cunning Castaway, both Jaces can exist under your control. 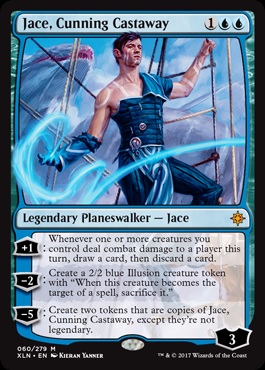 This is a lot to take in. What does this mean exactly? One thing overall is very true, this is a huge benefit to every planeswalker ever printed. Being able to play more than one instance of Jace or Nissa allows people not to have to pick and choose which Jace or Nissa they want. They can play both if they have different names. The biggest impact of this is for midrange and control decks. Traditionally, these decks have played the most planeswalkers; now theyâll be able to play more planeswalkers and milk all the benefits that come from doing that. This will be overall healthy for every format in Magic because Midrange decks tend to not be oppressive. Thankfully Wizards of the Coast did prepare for Standard in case they did manage to be too good. The printing of Hour of Revelation and Vraska's Contempt go a long way to keeping planeswalkers in check.

Not only do planeswalkers, midrange, and control decks get better but certain cards that care about legendary permanents also greatly improve. These cards are mostly played in Commander, but not exclusively. Some of these cards are:

This card is mostly played in Commander but it got a huge boost since it can now tutor for planeswalkers. If youâve ever wanted to play her in Commander I suggest you go ahead and pick her and the respective planeswalkers up.

Not only can she steal Commanders but now she can steal planeswalkers. If you like playing with your opponentâs cards in Commander, pick her up too.

Sure, it says copy a creature but if you manage to animate say something like Gideon, Ally of Zendikar then play Sakashima youâll have two Gideons. You can make double the tokens or swing for ten damage! Is this good enough to see Modern play? I donât know but itâs interesting, especially since you can rebuy Sakashima with his bounce ability. Another card that plays well with Gideon now is Shizo, Death's Storehouse. That one is an easy include too if youâre

If you play Atraxa, Praetors' Voice in Commander you might want to pick this one up. An Eldrazi Temple for planeswalkers is pretty good.

Big buff since this will basically allowing you to cast planeswalkers for one generic mana cheaper and every other turn they will actually just net you mana.

Djeru, with Eyes Open was cool for a hot minute. Now Thalia's Lancers can do the same thing and so much more. It also has a bigger body and First Strike.

This card got worse since it now canât hit planeswalkers. Once Transgress the Mind rotates Iâm not even sure if this will be good enough. Probably not, Doomfall should take over.

The more planeswalkers you have out, the better Ajani Steadfast will become. His minus ability can quickly get out of hand if you just have a couple of planeswalkers out.

Thatâs enough about certain cards. What about formats?

The biggest impact is most notably going to be planeswalkers with the same sub type. Cards like Nissa, Nature's Artisan had no chance to see play in Standard because it competed with Nissa, Vital Force. With the new ruling, however you could play a couple of Nissa, Vital Force and maybe a Nissa, Nature's Artisan. A better example would be wanting to play Nissa, Voice of Zendikar alongside Nissa, Vital Force. This wouldâve been amazing in current Standard because Nissa, Voice of Zendikar protects you and your planeswalkers so well with 0/1 plant tokens. Coming down turn three was the key. You coudâve also thrown in Nissa, Steward of Elements and played a sweet Simic Nissa deck.

Chandra, Torch of Defiance ramps you very well into Chandra, Flamecaller. If the planeswalker rule was legal now, Standard would be different. Maybe Deploy the Gatewatch wouldâve been playable!

The new planeswalker rule is most assuredly going to have the most impact in Modern. Modern is faster than Standard but not as fast as Legacy. A planeswalker is a lot more likely to see play in Modern than Legacy and Modern has access to almost the exact same planeswalkers as Legacy. The two types of planeswalkers that get the biggest benefit from this change are Liliana and Gideon.

Control has risen a lot in popularity in Modern. A lot of lists ran two Gideon of the Trials and one or two Gideon Jura or Gideon, Ally of Zendikar. I would not be surprised to see a

Control deck running all three of these Gideons. If you have an emblem from Gideon of the Trials and have multiple Gideons out, itâs going to be pretty gosh darn hard to lose.

A big sleeper is going to be Tezzeret. So many times Iâve wanted to play a Tezzeret deck with Thopter Foundry and Sword of the Meek but not being able to play both Tezzeret the Seeker and Tezzeret, Agent of Bolas hurt. Hopefully now it can be a thing.

Whatâs better than all this is that midrange decks tend to be slow. My hope is this new planeswalker rule allows Midrange decks to become stronger in Modern which in turn means you will die less often on turns 2-5. Now we can all play more Magic in Modern, whatâs more exciting than that?

The biggest benefit here would be running multiple instances of Jace. Jace, the Mind Sculptor just overshadowed the rest. The option of running Jace, Vryn's Prodigy and, to a lesser extent, Jace Beleren alongside Mindsculptor can be excellent depending on your deck.

With this new rule, planeswalkers will go up initially. Ones that are good in Modern like Liliana, the Last Hope and Gideon of the Trials will maintain their price. Any card that interacts favorably with planeswalkers becoming legendary will also go up. These are cards we talked about earlier like Empress Galina and Captain Sisay. Even other cards we havenât talked about like Mirror Gallery have potential to go up because of shenanigans that can be done with it and planeswalkers. Iâd recommend picking up Planeswalkers and cards that interact favorably with them before they spike. Hopefully by the time this article comes out, itâs not too late!

I do think everything âplaneswalkerâ will initially spike but cards that arenât in high demand like Liliana, the Last Hope and Gideon of the Trials will come back down.

With this new rule in effect, why donât we build a Modern deck that can abuse this new planeswalker rule?

This deck uses the tap out strategy of Control where instead of countering spells turn after turn, we just tap out for planeswalkers and take over the game with their abilities. I want the full playset of Wall of Omens and Supreme Verdicts to protect our planeswalkers. They will have to overextend to get through our Gideons, emblems, Wall of Omens, and Jaces. When they do, thatâs where Supreme Verdict will shine. Not to mention if we have one of each Gideon out, not only will it be hard to kill us because they must get through all of them but we can kill our opponent very quickly. Animating all three Gideons then following it up with Supreme Verdict will allow the Gideons to still attack for 15 damage. That might be magical Christmas land but even just having two out at a time is going to be rough for our opponent.

This list is just scratching the surface. I want to try Sakashima the Impostor here but Iâm not sure if itâs good enough. The deck can also play many more Gideons or Jaces like these:

Those four are the weaker ones but they are still options. Heck, maybe you just play mono Gideons and toss in Gideon, Champion of Justice to really make it hard to kill you through a Gideon of the Trials Emblem!

Iâm honestly excited for what the future of Magic holds with the new planeswalker rule. Iâm hoping this will overall extend match time in Modern because I dislike dying early. Especially on turns 3-4. I want to play Magic gosh darn it!

Weâve reached our end. Tune in next time as I go over some of the new spoilers in Ixalan and what cards Iâm excited to brew with!

As always, thanks for reading.