The only thing more exciting than spoiler season is Ravnica spoiler season. We've already seen a ton of sweet cards from Guilds of Ravnica and today we are going to keep the hype train moving right along. Coolstuff has been graced by Wizards of the Coast with three previews.

Of course, you didn't know, how could you? If you had known, we at Coolstuffinc would not have been doing our job right. We are aligned with the tenth guild, the unseen guild, we exist, and we are part of House Dimir. All our spoilers today are of course also aligned with the house of secrets. There is no turning back now, open your eyes and see Dimir. 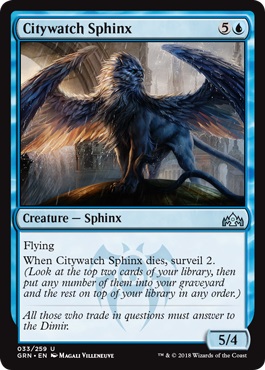 Citywatch Sphinx isn't winning an award for Constructed playability. We have a plethora of better finishers to choose from at converted mana cost six, but this Sphinx is a solid finisher in Limited. If it can't get the job done and dies, it's nice to be able to dig deeper into your deck with Surveil, hopefully insuring you do not draw any fluff or more lands. 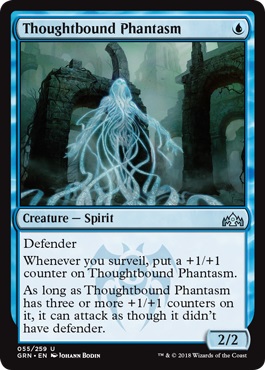 Thoughtbound Phantasm has a solid body for what it costs, especially when you start growing it. Think of it as a different Thing in the Ice. It curves nicely into Thought Erasure making it a 3/3, giving aggressive decks a harder time to break through. Once it grows to a 5/5 it can turn the corner and start attacking, and then it can keep growing. I believe this card is a solid Sideboard option for

based control decks that have a good amount of Surveil cards in their deck.

The other place Thoughtbound Phantasm could see play is in Bant. This is mostly because of Arcades, the Strategist making Thoughtbound Phantasm a cheap cantrip on a decent body. Not being in Black means that you lose out on some Surveil cards but hopefully we get enough Mono-Blue cards that surveil to justify it. Just Surveilling once is worth it since Arcades lets defenders attack and a 1 mana 3/3 is plenty good enough, especially if it replaced itself thanks to Arcades. 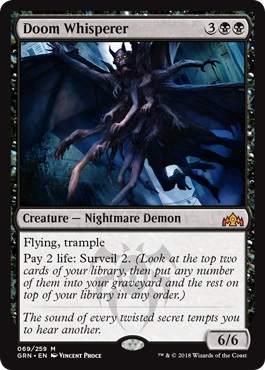 Of course, we save the best for last. Doom Whisperer is an amazing finisher for Black midrange and control decks alike. Unlike Desecration Demon and Abyssal Persecutor, Doom Whisperer has no drawback for having these insane stats. He just costs one more, but you also get a powerful ability for that extra mana you spend. Being able to pay two life and Surveil 2 whenever you want is something we haven't seen before. It is stronger than scrying since you can abuse the cards you Surveil away. For example, something like revealing two Narcomoebas to your Surveil ability. Fueling Search for Azcanta is another real prospect. So is putting cards with Jump-Start into your graveyard. If you have ways to reanimate your creatures, Doom Whisperer is also excellent at giving you fuel for your reanimate spells.

Again, Doom Whisperer has amazing stats allowing it to beat other creatures similar in cost in combat like Lyra Dawnbringer, Demanding Dragon, Niv-Mizzet, Parun, Dream Eater, and Nicol Bolas, the Ravager. It even trades with the bigger dragons like Palladia-Mors, the Ruiner and Vaevictis Asmadi, the Dire.

I'm no expert on these decks but here's a good starting point for Modern.

Something like this is where I'd start for a Modern Doom Whisperer deck. It's crazy that you can Grisly Salvage on turn two and then combo on turn three (if you played a Birds of Paradise) or on turn four if you have the right creatures in your graveyard. It's also hard to combat since people won't fully know what you're doing.

That's it, you've seen enough of House Dimir's secrets. We can't be giving out all our information! I'm excited for new Standard and playing Doom Whisperer midrange decks alongside Assassain's Trophy. Thanks for reading guys and gals and thanks again to Wizards of the coast for these incredible previews. I'll see you all next Friday.