In the past year, I have intentionally destroyed over three hundred rares and mythic rares. Wait, let me explain.

Whatâs your favorite part about LEGOs? Okay, maybe you havenât built any spaceships in years, but think backâwas it the experience of creation? The joy of finding the perfect piece or perfect process to do what you wanted? Did you spend hours playing with your creations, or skip straight to destruction by crashing your boat into the wall or hitting your LEGO house with an imaginary explosive?

For the past three years, I have been making 3D TCG cards, a hobby that combines all the best parts of playing with LEGOsâexcept that the destruction part comes first, so Iâm left with a sweet finished product. For the past year, Iâve focused mostly on making 3D Legendary creatures since I can then use them during games. Normally, the extra thickness of 3D cards makes them unplayable, but for Commanders, itâs not a problem. Iâve gone so far as to make the Commander of my Pauper deck 3D: 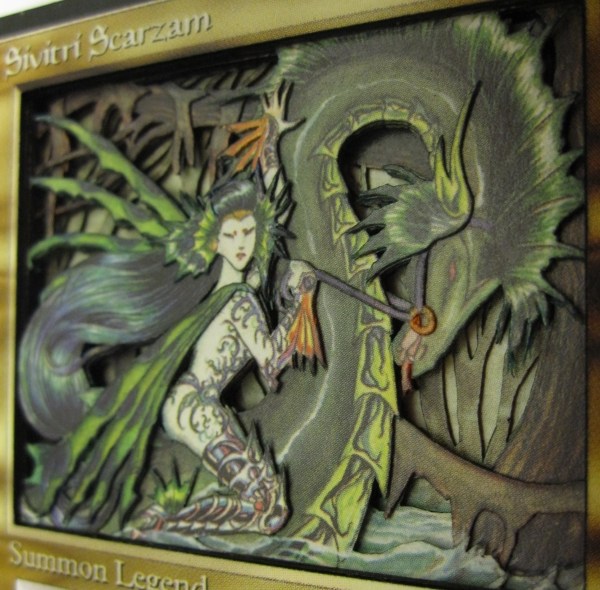 Today, Iâm going to take you through my process for making 3D cards. Iâll be cutting up a cheap common so you can follow along at home if youâd like. First, here are the supplies I use to make most of my cards:

If youâre just trying this out, I suggest a simpler list:

A thick stack of paper does a good job as a cutting surface as long as you throw out the top few sheets when they get ragged. From talking with others who have made 3D cards, I have learned that Elmerâs glue tends to warp the cards and superglue dries too fast to work with easily, so Iâd recommend against those. 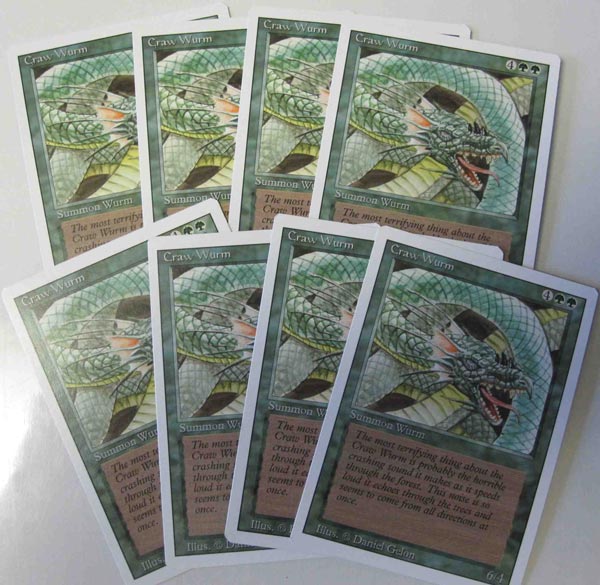 When I still played with LEGOs on a regular basis, one of my favorite Magic cards was Craw Wurm. Despite being a common, Craw Wurm was one of the most valuable cards in our play group. Recently, I acquired a huge quantity of Revised cards, so digging up a bunch of Craw Wurms to destroy wasnât a problem. In fact, I ended up with way more copies than I needed, so if you want to follow along at home but canât get your hands on some Revised Craw Wurms, e-mail me and Iâll send you a bunch.

My basic process begins with cutting out the layer furthest back: 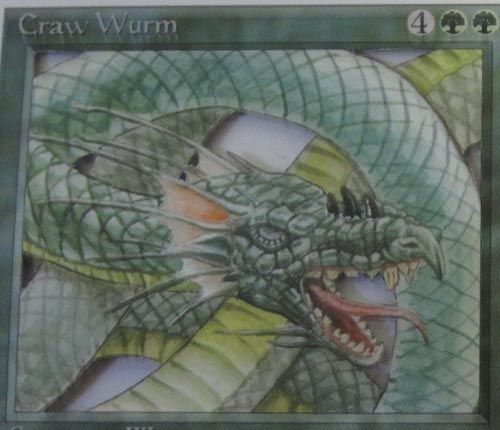 Next, I take another copy of Craw Wurm and cut out the layer next furthest backâin this case, the horizontal section of the Wurmâs body underneath his head.

The next two layers are trickyâas far as I can tell, thereâs no clear indication of which should be further back. In this case, I could either leave them both in the same layer, or just pick whichever one I want to be further back. I chose to cut out the part under his head first. 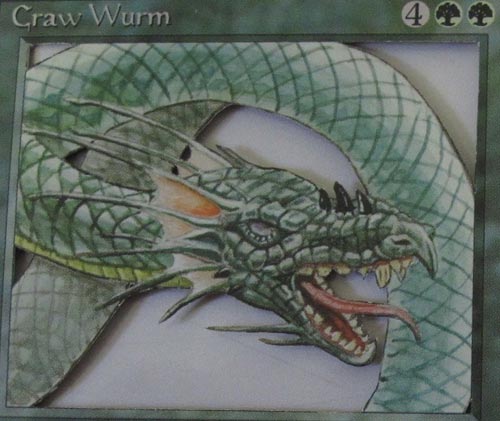 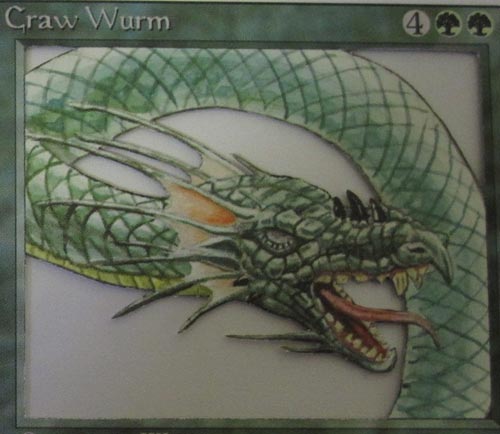 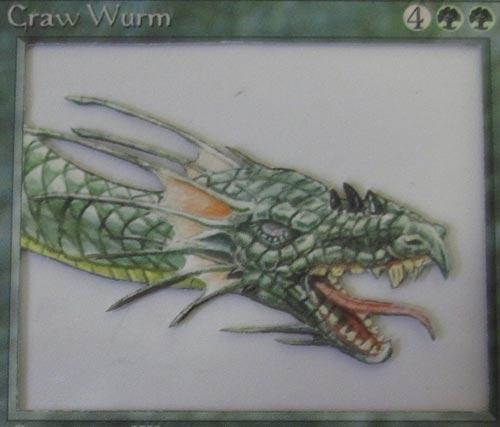 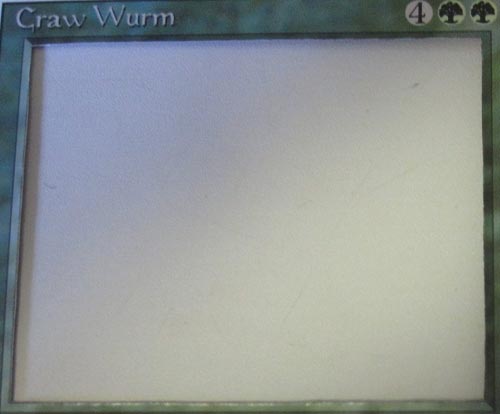 In order to put some depth between the layers, I cut out the art from a bunch of commons and insert one of these âspacer layersâ between each Craw Wurm layer. 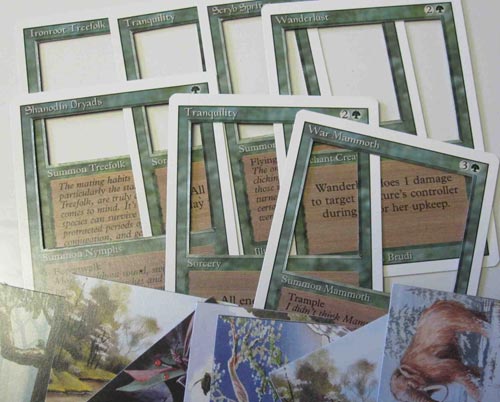 For more depth, you can add more spacer layers. Some people use adhesive foam for their spacers instead of actual cards; I prefer the more solid feel using cards gives.

Okayâletâs stack it together and see how it looks! 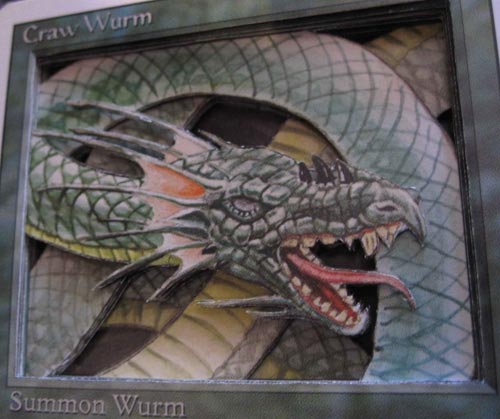 Not bad! Itâs already looking pretty nice, but something is off. It looks a bit ragged around the edges; you can see the inner white of the card along the edges of the border and white spots all over the Wurmâs head. Thatâs what the markers/pens are for. I trace the edges of the cardâanywhere I can see the white from the inside of the card. I usually match my edging to the cardâs art, so I outline most of the Wurm and the card borders with green, using a little gray, red,, and orange on his teeth, tongue and ears. However, you can get away with using just one marker, too. Iâd recommend using a gray or a black. 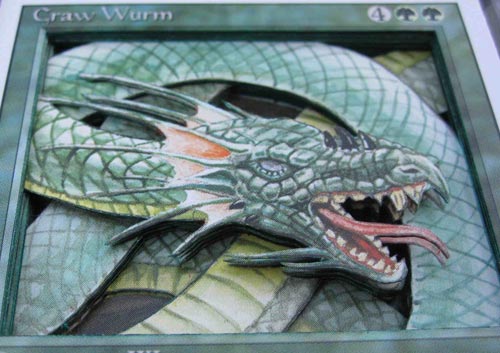 Much better. If I had made this card a couple of years ago, I would have stopped there and been very happy with the result, but I think the Wurm will look even better if I add some detail to the head. Using the picture from the border-only layer and an extra copy of Craw Wurm, I cut out these pieces: 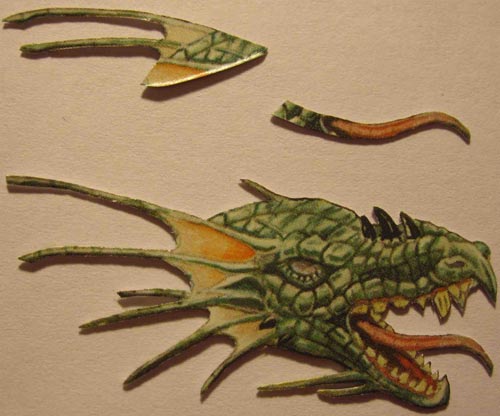 If I were working on a more expensive card, instead of using an extra copy Iâd steal those pieces from a further-back layer where those parts wouldnât be missed. 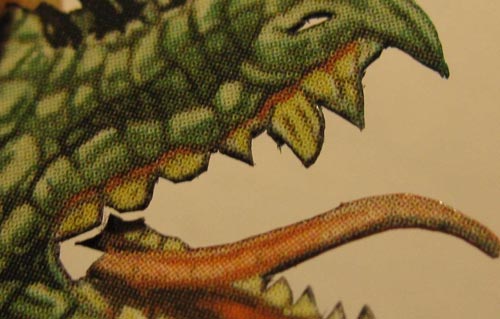 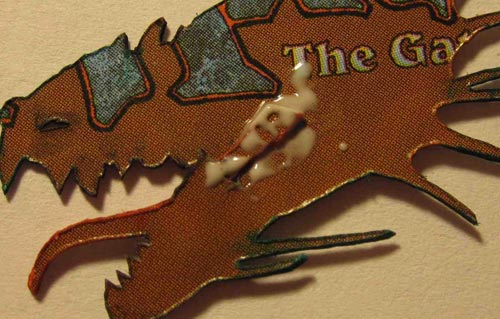 I cut out a section of the Wurmâs mouth, slip the tongue through the hole, and glue the pieces together. I also decide to cut out the nostril. After attaching the Wurmâs left ear to to other side of his head, I move on to the border: 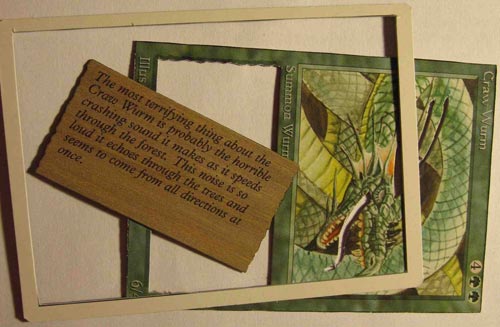 To raise the cardâs border and text box, I remove those from the extra Craw Wurm I used for head detail.

Now, itâs time to move on to gluing the layers together. In order to connect the neck to the body behind it more smoothly, I remove the spacer between those layers. I also decide Iâd like to make the Wurmâs head reach out of the art more, so I bend the next a bit so itâs slanted forward. To give room to do this without reaching very far beyond the cardâs top layer, I put two spacers between that layer and the top border layer. The finished stack is like this:

Craw Wurm â head/neck only, bent forward past Spacers 5 and 6

I glue two to three layers together at a time by spreading a thin layer of glue on the parts that will touch, pressing them firmly between a couple of stone coasters (any firm, flat objects will work), wiping away any excess glue that seeps out, then leaving the layers to dry under a stack of heavy books for fifteen to twenty minutes.

After gluing everything together, the finished product looks like this: 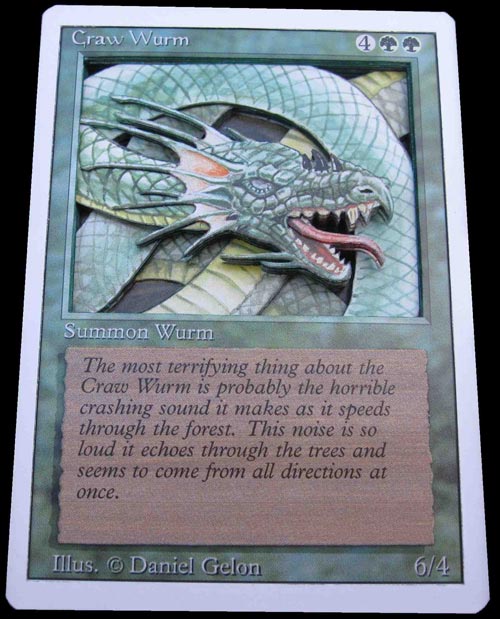 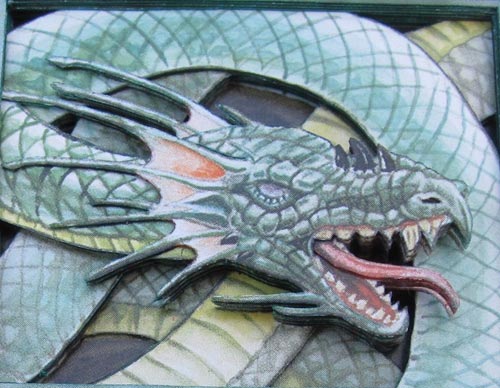 The same basic process can be applied to start bringing out the 3D nature of most Magic art. If youâd prefer to start with a more recent card, hereâs a few for which figuring out layers is fairly easy: 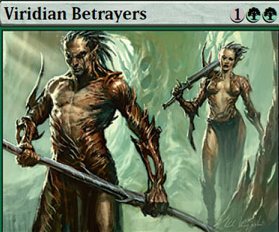 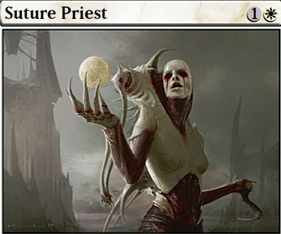 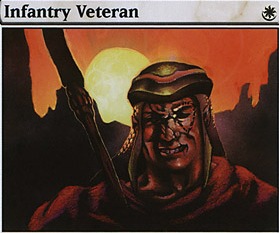 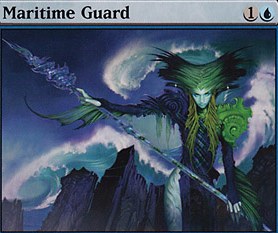 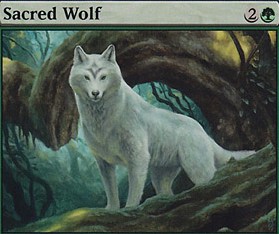 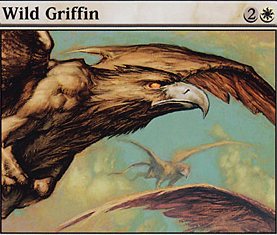 While thatâs the basic process, as you start to work with more complicated art, youâll realize that thereâs a lot more techniques you can use to maximize the 3D effect depending on the art of the card. 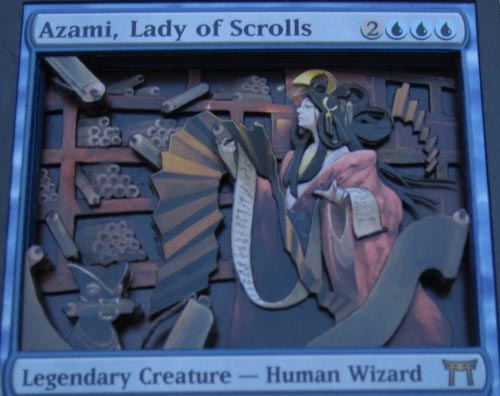 If you have questions about how to tackle a tricky card, Iâm happy to give my thoughts. Remember, thoughâthereâs no âright wayâ to do this. Just like with painted alterations, everyone has their own process. Lindsay Burley has been selling her own 3D cards at Magic events for the past couple of months, and itâs pretty clear just from a glance that her process is vastly different from mine. Ted Knutson recently posted pictures of his 3D Time Stop done by Seishiro Ookubo, and itâs breathtaking.

All it takes to start is a lot of patience and a willingness to experiment!