Of all the types of Goblins that Wizardsâ creative team has introduced over the years, the Akki, from the Sokezan mountains of Kamigawa, are easily my favorite. While the Mogg are known for their brutality and the Kyren for their intelligence, the Akki are primarily pranksters. The fact that their âpranksâ generally involve explosives or large boulders just makes them more lovable!

The most-played Akki is of course Kiki-Jiki, Mirror Breaker. One of his pranks involved tossing his sister Kapi-Chapi into a lava field (she didnât make it). Itâs always bugged me that the card is unable to make a copy of Legendary creatures considering that the first reflection he ever made was of himself. Despite that, heâs one of the most popular mono-Red Commanders. My own mono-Red deck is led by a different coward, but makes good use of the Goblin Shaman among its ninety-nine. 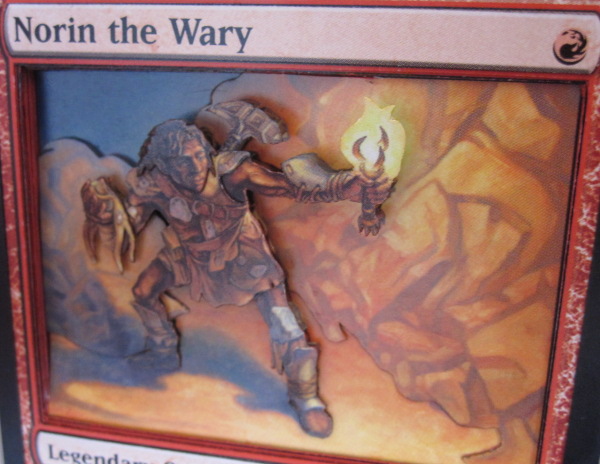 Acquiring your own 3D Kiki-Jiki, Mirror Breaker is actually pretty simple. Just head over here and order one! 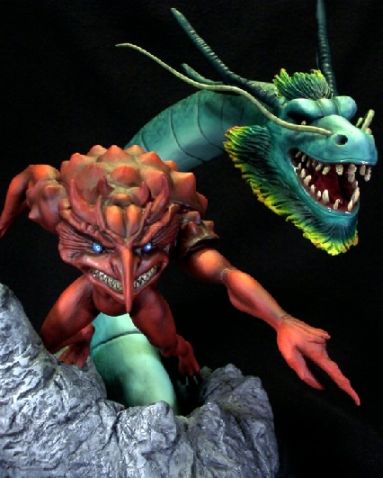 If I had a Kiki-Jiki Commander deck, I think it would be pretty cool to use the statue as my Commander, even if it would crowd the battlefield. Iâm pretty sure the footprint is smaller than that of the new oversized Commanders. However, if youâd rather not carry an eight-pound statue to all of your Commander games, maybe a 3D version of the card is a better option.

Take a moment to look at the art for Kiki-Jiki and think through what layers you would cut. 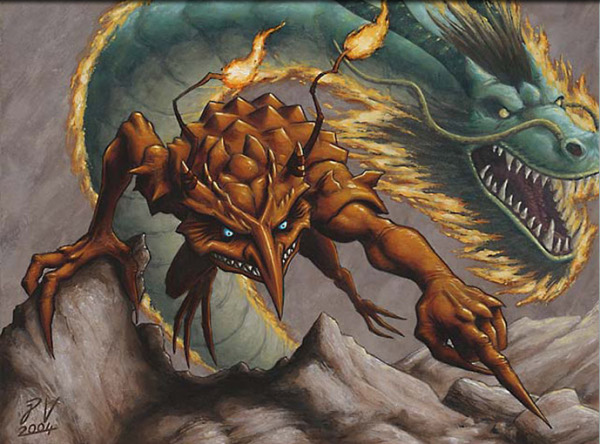 Hereâs what my first thoughts are:

Layer 3: Remove the far background and the dragon

Layer 4: Remove everything but Kiki-Jiki and the front line of rocks

Layer 5: Remove everything but the front line of rocks

Layer 6: Remove all of the art

Parts of Kiki-Jiki that pass the rock line will be built from individual pieces of his body.

Cutting a few layers can make it easier to think through the rest of the card, so I start by cutting my basic layers. 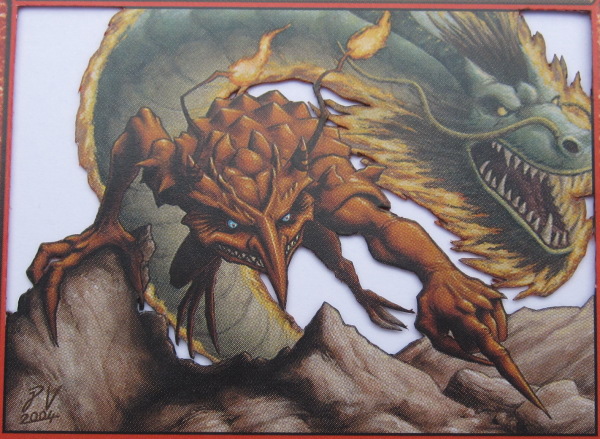 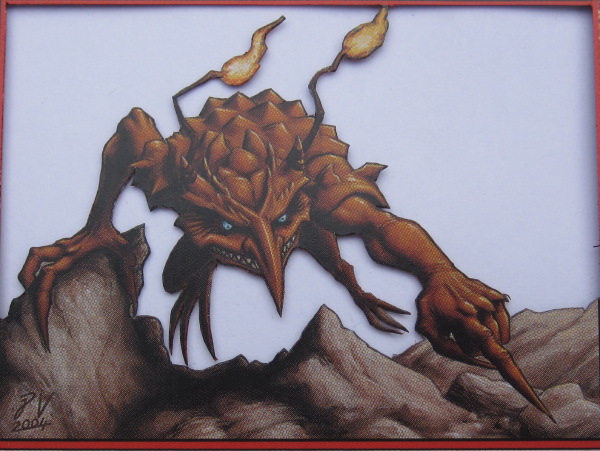 After cutting that layer, I decide to only have the fires be present in a single layer of detail. I plan to remove them from that layer later, and take them out of the next layer when I cut it. 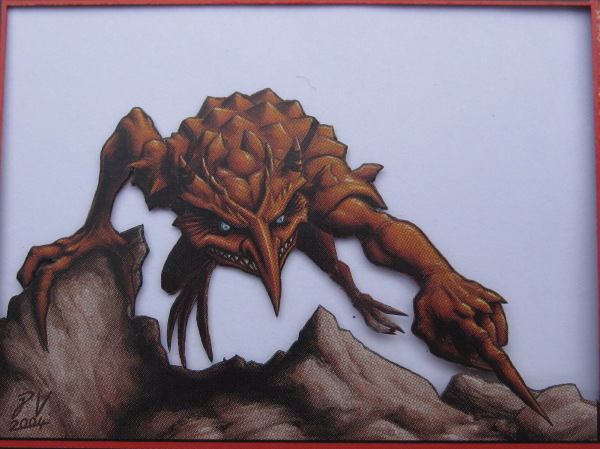 This layer will be the base for Kiki-Jikiâs body. Iâll attach the smaller pieces of him that I cut to this layer and the next; the only part of this layer that will be visible in the end will be the goblinâs legs. 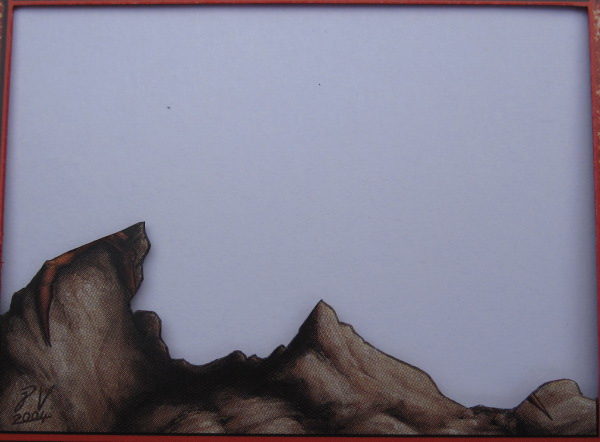 The first details I cut are the pieces of Kiki-Jiki himself:

Some notes about each of these pieces:

Cutting those pieces of Kiki-Jiki uses a lot of my scraps, so I end up stealing the fire strands from the second layer I cut: 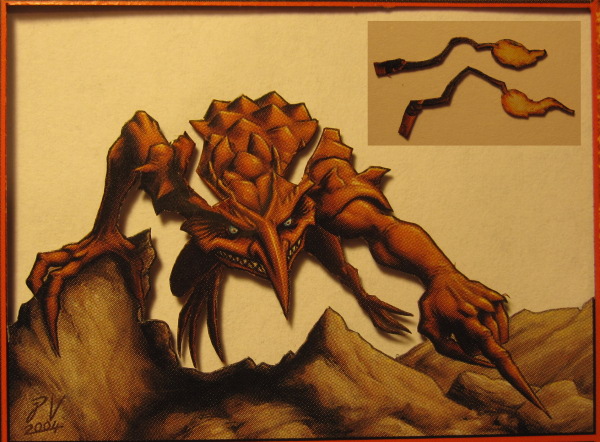 I assemble Kiki-Jiki and the front line of rocks. Just before attaching the final piece (his head), it looks like this: 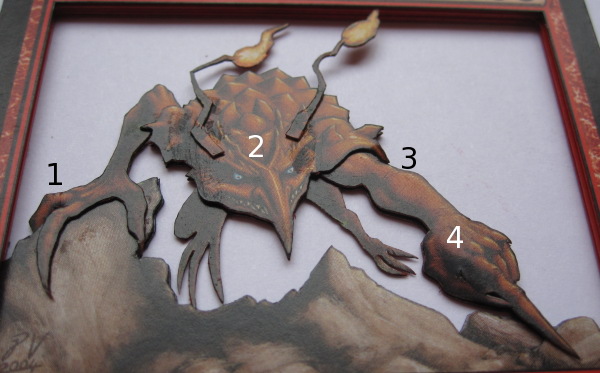 After adding the head, I use a damp cotton swab to remove the smears of dried glue that are visible in that picture.

Next I turn my attention to the dragon. To set the interior of his mouth back from the rest of the head, I cut that out from the dragon layer (the first layer I cut). 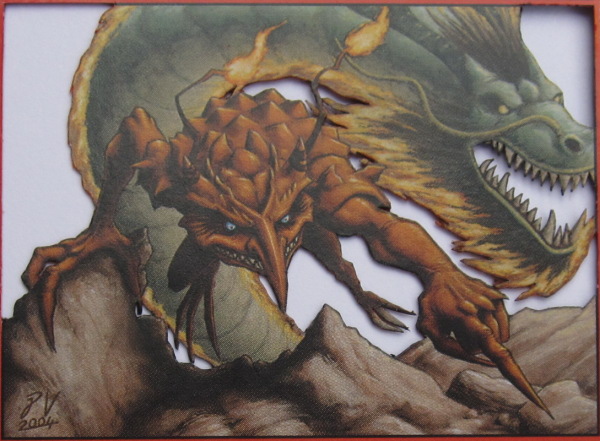 Detailing the dragonâs head is a complex process. First I cut these pieces:

When all of the pieces of the head are fully assembled, the whisker covers the seam, making that transition even more smooth: 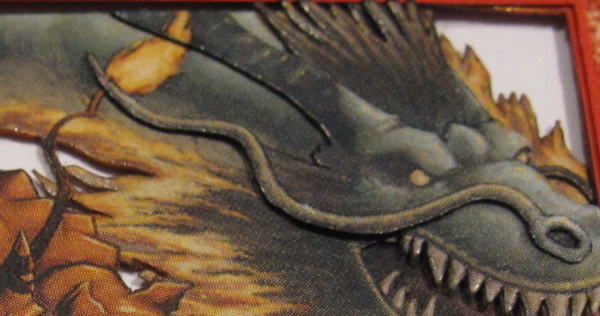 While doing this, I also decide to cut the dragonâs body and neck away from the borders of the card, leaving him attached only where his body disappears behind the rocks. This makes it possible to bend his body forward, making it look like he is forward toward the viewer.

At this point, all of the layers and details are cut and ready to be fully assembled. However, the fire strands tied to Kiki-Jikiâs head are both very skinny and far from the dragonâs neck (the next layer where they exist). When an object is both skinny and far from the next layer where it exists, it is more distracting in the background. For example, look at this Deadshot Minotaur, the second 3D Magic card I ever made: 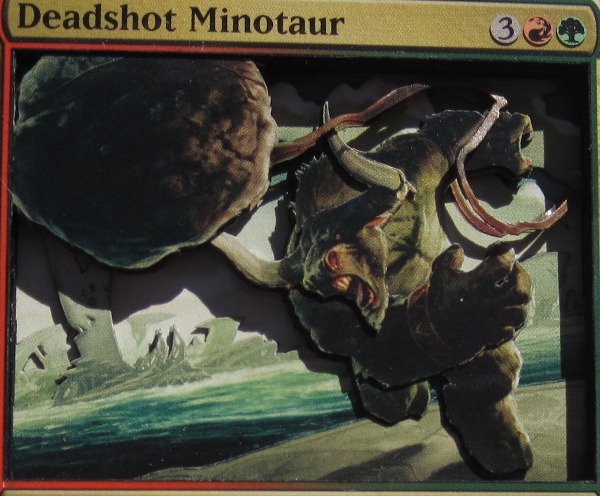 The cord attached to the rock has both of those factors, and so from any angle except straight-on, the background cord is distracting.

Iâm bad at both painting and color-matching, but even a crude paint job is enough to get rid of the distraction and put focus back on the foreground where I want it. I use a cheap set of acrylics to paint away the fire strands in the background: 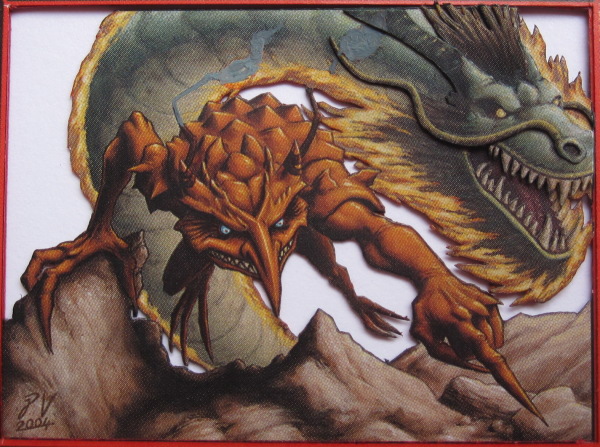 Finally, I assemble the card.

Kiki-Jiki with sky and dragon removed

Spacers 5 through 7 contain Kiki-Jiki himself since he leans forward past the rock line in Layer 9. 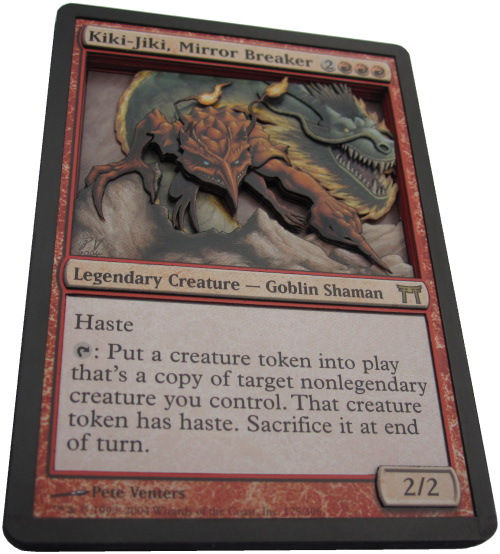 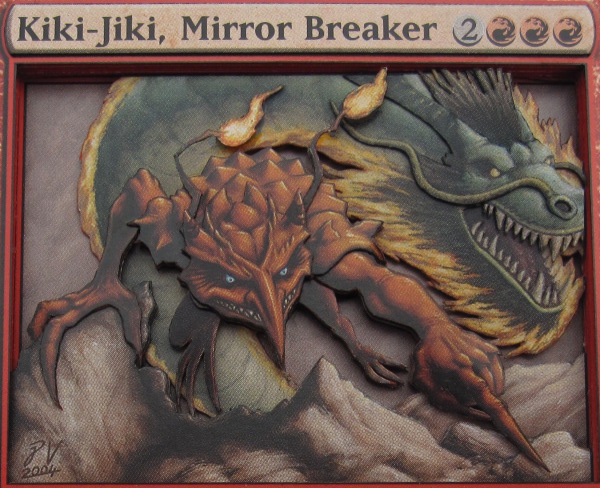 Until next time, keep cutting cards and playing pranks. Just donât throw your sister into a lava flow.