Over a year ago, in my fifth article here on GatheringMagic, I wrote about the altering trend of âguruficationâ: painting the art from the Guru basic lands into the backgrounds of other Magic cards.

While a set of five pieces of art naturally lends itself to a cycle of five alters, for a long time, most guru alters were single cards rather than parts of a cycle. Single guru alters still pop up from time to time, but the guru painting theme reached a peak when Eric Klug worked on a stunning set of moxen.

In that old article, I tried my hand at gurufication by swapping in the art from an actual Guru Plains to the background of a 3D Elesh Norn, Grand Cenobite. Over the months and through many delays and setbacks, I worked on the gurufication of the rest of the praetors of New Phyrexia. I was determined to complete the cycle so that Elesh Norn would not stand alone.

$700 worth of cards later, the cycle is now complete.

Rather than give you a detailed walk through of any one card as I usually do, this week, I'm going to do a faster rundown of three of the Praetors. If you have any questions about the specifics of any of the cards, feel free to ask in the comments or send me an e-mail for more help.

The composition of Sheoldred, Whispering One is a bit more complicated than either of the two previous Praetors in the cycle. While Elesh Norn and Jin-Gitaxias, Core Augur can be easily separated from their backgrounds, the same is not true of their swampwalking rival. Her rear limbs disappear into the fog, something that is not possible when she is shifted away from New Phyrexia and into the Guru Swamp.

To compensate for this, I made a layer out of the low rock line that is partially visible through the fog. This gave her limbs something to vanish behind while keeping most of the background open to show off as much of the Guru art as possible. 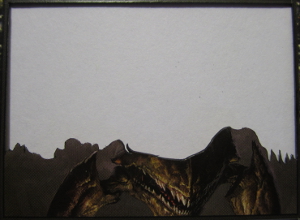 Three layers were necessary for Sheoldred's body: her rear limbs, her front limbs, and the big body/mouth thing. 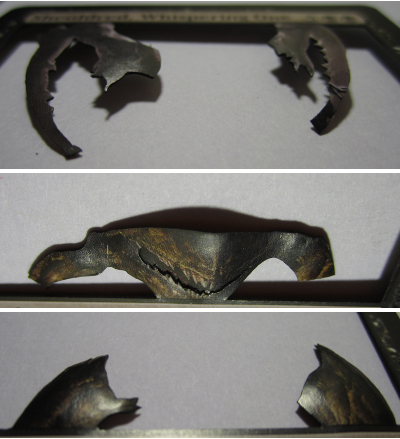 Once the layers were completed, I cut out the detail pieces to make up the rest of Sheoldred. 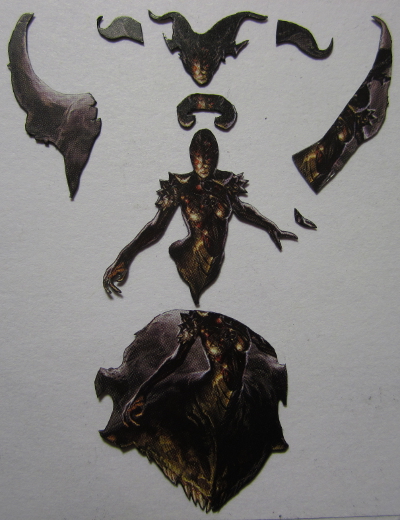 All of those pieces required some rounding and shaping, and many of them needed to be shaved thin to make transitions from one section to the next more smooth. The most important place for shaving was the bottom of Sheoldred's human body, where it disappears into the beastly body. Shaped and assembled, the human body looked like this: 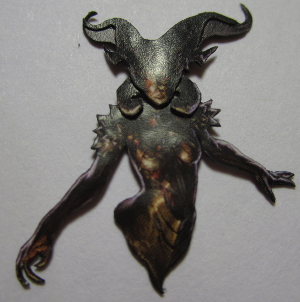 The final step is always the most painful: Destroy a Guru basic land and put the art behind the rest of the 3D card. 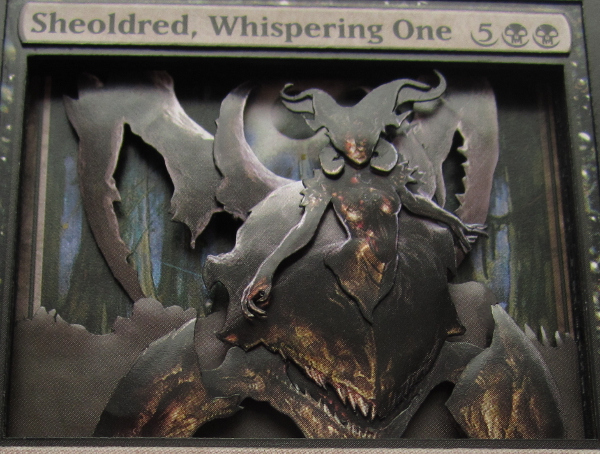 Just like Vraska the Unseen, Urabrask has an awkward title. She's not unseen, and he's not hiddenâ.â.â.âI'm looking at them right now! They're right there!

My issues with his name aside, I found Urabrask to be a tricky card for the 3D process. There wasn't much to cut, but figuring out how to assemble all of the detail pieces together with only a few basic layers to attach them to was a challenge. Two of the basic layers were simple: Urabrask's extended arm and the foreground ledge.

That extended arm ended up being attached to some of the detail pieces, but the primary foundation on which the Urabrask was built was this basic layer: 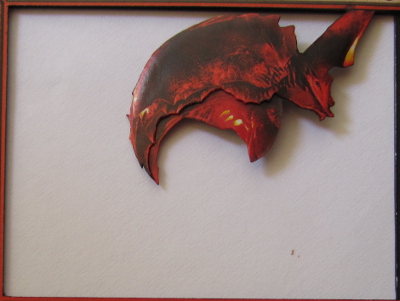 That picture is actually of one basic layer with one detail piece already attached underneath it. Most of the rest of the detail pieces can be seen here:

Two more detail pieces are not shown in that picture. One is the middle finger of Urabrask's right arm; I cut it off from the detail piece shown there and made a new piece to set that finger back. The other is the tiny, yellow arc of energy that's visible on the D-shaped piece above.

As I mentioned above, assembling Urabrask was a bigger challenge than cutting the pieces. Each piece needed to be added one at a time, but since they were all curved from the shaping process and had little to anchor them in place, I had to either find a way to hold each piece in place while the glue dried one piece at a time or hold the piece in place for myself. While in general I'm very happy with my choice of glue, this 3D card certainly made me consider trying one of the faster-drying glues that some 3D alterers use. 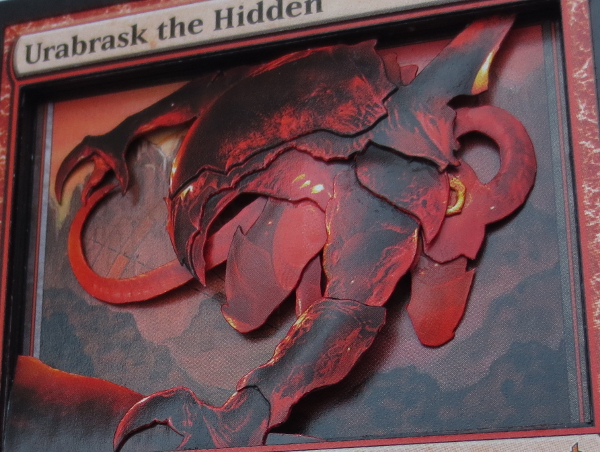 Earlier this year, Julie White ran a few alter idea contests on Twitter. She'd tweet a picture of nine or ten cards, and people would tweet back alteration ideas for one of the cards. If she liked your idea, she'd paint it and send it to you. I thought that Vorinclex was less deserving of the title âVoice of Hungerâ than a certain blue monster, which is how I ended up with this: 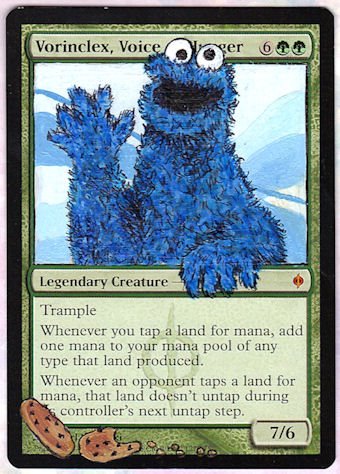 My own altered Vorinclex was built on these two layers of the Praetor's body:

The body layer was close to the background, with the head piece further forward. Even further forward than those layers were the pieces his arms and legs reach forward to: the tree on the right side of the art and the ridges at the bottom of the art. The tree was curved and rounded heavily backward, so the inner edge is close to even with Vorinclex's body.

Because Vorinclex has so many visible claws, the 3D card required quite a few small detail pieces. 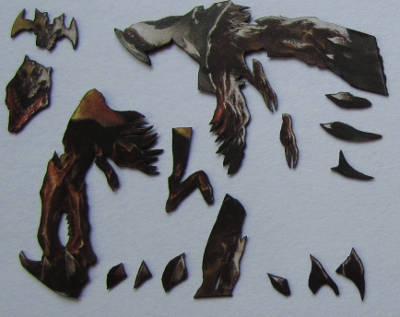 The larger detail pieces required more shaping and shaving, but every detail piece was shaped to some extent. The shoulder piece required the most work in order to create the right amount of bend and wave to the bony ridges. 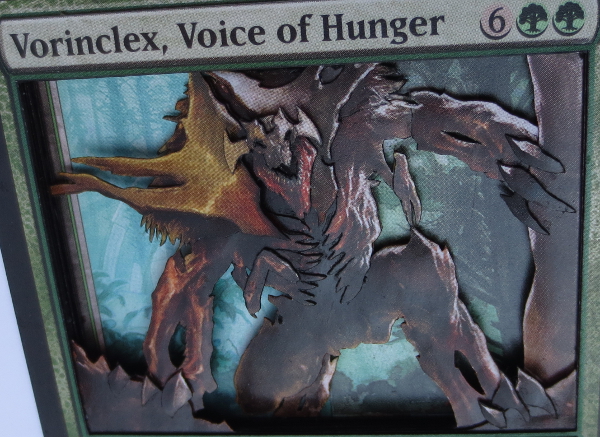 The five Guru Praetors are now in the hands of the mad genius who thought up the project, and all I have left are the pretty pictures. 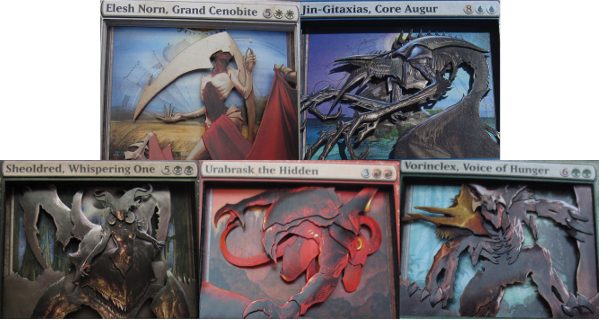 Well, that and the mangled scraps that used to be a set of Guru basic lands. As happy as I am to have completed this cycle, I don't think I'll be working on any similar cycles in the near future.