What is it that makes people like Isochron Scepter so much? The fact that it costs 2 mana is greatâif it cost 4 or more, it would become far less attractive. But the exciting thing is the versatility and consistency it provides. Choose an instant that costs 2, imprint it, and enjoy the benefits of that spell for the rest of the gameâ.â.â.âuntil the first Naturalize comes alongâ.â.â.âunless you imprinted a counterspell.

A card thatâs similar in theme but quite different in playâand thatâs always intrigued meâis Kaho, Minamo Historian. At one point, I scoured the blue instants of Magic as I considered building a Kaho Commander deck. Unfortunately, the tools just arenât there to have him do much in mono-blue, but heâs someone Iâll be keeping my eyes on as more and more blue instants are printed. It could take just one key spell to turn him into something playable and fun.

Today, though, I have a preview card from the on-the-horizon Magic 2014. Like Kaho, heâs a blue, 4-mana creature, and like Isochron Scepter, he lets you virtually imprint an instant and cast it turn after turn. 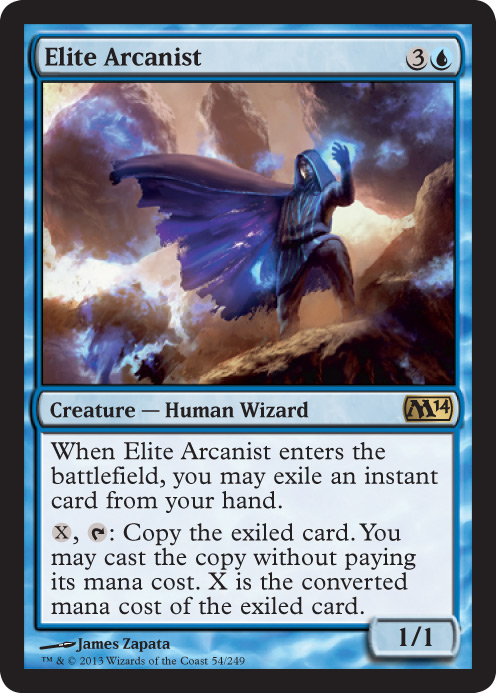 Unlike Isochron Scepter, the spell doesnât have to cost 2 or less. Thatâs a big deal. Of course, you have to pay its converted mana cost to activate the Arcanist, but itâs still quite exciting.

To start, letâs take a look at some instants in Standard we wouldnât mind imprinting on our new Wizard friend. (In case you are unfamiliar with the Mirrodin-block and Scars of Mirrodinâblock ability word, imprinting something means you exile it to a permanentâs effect, and then that permanent uses the exiled card in some way. Itâs not technically on Elite Arcanist, but he mimics the concept.)

Now, Iâm not expecting a 4-mana 1/1 to make the competitive cut for Standard, but if youâre visiting my article looking for options on the new card, there you go. And if you like trying to do weird stuff (like I do) in sanctioned events, thereâs your challenge.

As a quick refresher, âPocket Combosâ is my name for sets of cards that can be implanted into a Commander deck so that, every once in a while, youâll just pull it off. Alternatively, you could infuse your deck with tutors to focus on the Pocket Combo or you could forego the Commander format entirely and build a sixty-card combo deck around the synergyâusing the four-of rule to great advantage.

Today, Iâm going to highlight Elite Arcanist by building a few Pocket Combos with himâ.â.â.âand then tossing them all into the same deck.

Note that, after looking through all Magicâs legendary creatures with

in their cost, I settled on either Riku of Two Reflections or Rubinia Soulsinger, both of which offer some synergy with the Arcanist and/or the cards that synergize with him. I settled on the Soulsinger for her relative obscurity and because I am able to play To Arms! She and Elite Arcanist both play great with Illusionist's Bracers, Thousand-Year Elixir, and Rings of Brighthearth. I will, however, greatly miss the loss of Riku, Firemind's Foresight, and Ral Zarek. 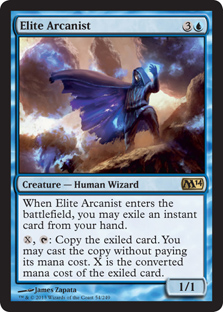 With these three cards, you can activate the Elf for

to activate Elite Arcanist with the imprinted To Arms!, and then untap both creatures, floating

and drawing a card. This draws potentially your whole library and makes a bunch of green mana, which you can use to activate any other Elite Arcanists a bunch of times (in conjunction with To Arms!). Of course, since this is Commander, youâll have to use Cackling Counterpart or Progenitor Mimic (in this list) for additional Arcanists. In lieu of Elvish Aberration, you could have three 1-mana-generating creatures, but I didnât want to fill the deck with those, so Citanul Hierophants is here to grant mana-generating superpowers to passersby such as Scrivener and Coiling Oracle. Note that the mana is all green but that Gemstone Array can fix thatâand also that since To Arms! draws you a card, youâll be limited in your mana amount by the cards in your library. Once you draw Vitalize, Momentary Blink (or Cackling Counterpart), and Thousand-Year Elixir, though, you can begin the combo using Vitalize instead of To Arms! so you can keep making mana without running out of a library. (Consider Laboratory Maniac if youâd like to turn this into a feature.)

With an Elite Arcanist imprinted with Orim's Chant, you can lock one opponent out of his or her turn on each of his or her turns (or on someone elseâs turn if you prefer). With Seedborn Muse, however, you can then lock each opponent out of his or her own turn. If you want to lock each player out of each turn to prevent instant-speed shenanigans, Echo Mage or Sigil Tracer can help you handle all three opponents in a four-player game, leaving your only vulnerability in playersâ upkeeps. Include Teferi, Mage of Zhalfir to take care of that.

This equates to, â

: Draw a card.â Itâs nice that the Arcanistâs ability even removes the necessity for

, tap the Arcanist, and then untap him and draw. This combo is part of what makes me miss Firemind's Foresight so much, but cards such as Personal Tutor and Mystical Tutor can help shore up this loss if you choose to run them.

In addition to the Pocket Combos above, Iâll leave you with a few more specific card choices and synergies to round out the deck before I leave you with it below.

Well, thatâs it for today. Iâll leave you with the list and a few new combos in your brain. Also, welcome to the world, Elite Arcanist.