The anatomy of ethical play has been a popular point of contention in the MTG community for the past week. As a competitor I can attest that when placing a high priority on winning, the distinction between angle shooting, rules-lawyering, gamesmanship, leveling, bluffing and even cheating can sometimes be ambiguous. But I can also attest that regardless of the stakes, the large majority of professional players, including myself, significantly prioritize fair play over winning. So in an attempt to better educate myself and all of you on the matter, Iâm going to describe my thought process in depth during situations in which I made plays that could potentially be construed as unethical. I would like to preface this by stating I do believe the following plays are ethical, or else I wouldnât have made them of course, but I do think there is room for discussion. So while Iâm not claiming I should be exempt from any scrutiny, I would like to reiterate that the point of this is to initiate a rational discussion on what constitutes ethical play and to define the difference between ethical play and unethical play, for a better understanding of this can lead to a more enjoyable experience for all involved in the game.

I chose the following scenarios for a specific reason. While they are all plays I made, they were influenced by similar plays I had seen professional players make on previous occasions. My realization of the significance of this is my purpose for writing this article. As someone who frequently plays on coverage, itâs imperative to have a better understanding on what constitutes ethical play in order to a establish an ethical precedent for less experienced players. 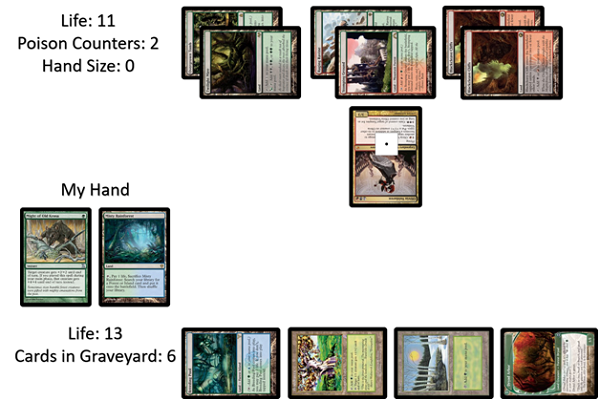 My opponent just played the last card in their hand, Olivia Voldaren, and killed off the last Infect creature I had in play. Itâs the end of my turn, and Iâm attempting to hastily figure out what Iâm going to do on my next turn.

Can I actually still win?

Do I have any outs?

I donât have a removal spell in my deck for the Olivia.

I donât think I can win.

I can draw Become Immense though.

If I cast Might of Old Krosa in my main phase and attack, will my opponent block?

I donât think so.

I havenât been representing Become Immense, so itâs very unlikely they would throw away the Olivia to play around a top decked Become Immense.

So if I draw Become Immense, I probably win.

What happens if I donât draw Become Immense?

My odds of drawing a Become Immense are less than 10%, and I have a one turn window to do so.

If Become Immense is the only card that matters here, I have to make my opponent think thatâs the card I drew.

Whatâs the best way to do that?

Regardless of what I draw, Iâm going to scan my graveyard quick.

Iâll pretend to think for just a few seconds then cast Might of Old Krosa on Dryad Arbor.

Iâve already deduced that my opponent isnât likely to block, so I really need them to think the card I draw is Become Immense.

After I attack, Iâll motion to cast a Become Immense before stopping as if I just realized they still hadnât declared blocks yet.

If they genuinely believe I drew a Become Immense, theyâre obviously incentivized to block.

If they donât buy it, it will be even easier for them not to block.

I canât be too obvious about it.

I untapped then drew a Breeding Pool. I began carrying out my turn exactly as I had planned. I cast Might of Old Krosa on my Dryad Arbor, and then I attacked. After I attacked, I tapped my Breeding Pool and picked up my graveyard. My opponent then informed me that they were still thinking, so I stopped. During this I never said anything, and I didnât move any cards outside my graveyard. My opponent then chump blocked my Dryad Arbor with their Olivia Voldaren.

(I did lose this game still) 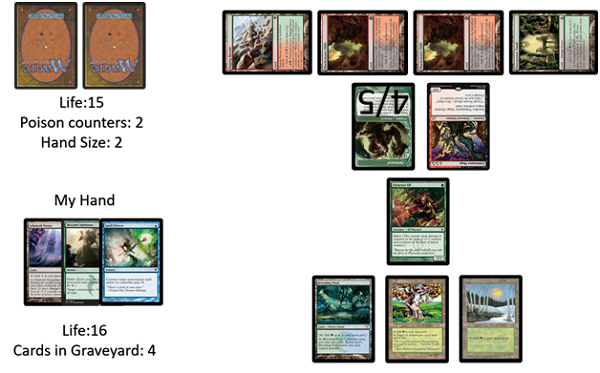 My opponent just passed after playing a Fulminator Mage and a Raging Ravine. I untapped and drew an Inkmoth Nexus.

My opponent missed a land drop last turn, so their last draw was obviously Raging Ravine.

They almost certainly donât have a removal spell because they had a good opportunity to cast one last turn, and their last draw was Raging Ravine.

They left back Tarmogoyf, so theyâd obviously prefer to block with the Tarmogoyf.

If I attack, theyâre going to block with Tarmogoyf and then Iâd cast Become Immense.

The last cards in their hand are creatures presumably, so If I trade Become Immense for Goyf theyâre just going to refill their board.

Iâd just be trying to draw Vines before they draw a removal spell at that point.

That probably wonât work out well.

If I get them to use their Fulminator Mage, I can play Inkmoth Nexus.

At that point I would just need to draw a land or a Mutagenic Growth, and they would have a single draw step to find a removal spell for the Inkmoth Nexus.

How do I get them to use their Fulminator Mage?

I have to make them think that either my Breeding Pool or my Pendelhaven matter.

How do I do that?

My best play here is Blighted Agent, so maybe theyâll chump with Fulminator and blow up my Breeding Pool.

If I donât play Blighted Agent pre-combat though, I obviously donât have one.

Theyâre constrained on mana, and are incentivized to play the creatures in their hand in order to speed up their clock.

So if my opponent knew I had a Spell Pierce in my hand, they may be further incentivized to use Fulminator Mage on my Breeding Pool.

I can pretend to accidentally reveal the Spell Pierce in my hand.

I can do that then think for a couple seconds and attack afterwards.

I decided that this line gave me the best chance to win. Iâm sacrificing an insignificant amount of equity by revealing the Spell Pierce, and attacking here isnât great but itâs not the worst either. I started to shuffle my cards a bit as I frequently do, but I intentionally dropped the Spell Pierce while doing so. I quickly scooped it back up and resumed thinking. I went to combat and attacked with the Glistener Elf, and my opponent blocked with their Fulminator Mage which prompted a Pendelhaven activation from me. They responded by using the Fulminator Mage on my Breeding Pool, and I followed up by playing the Inkmoth Nexus. On their turn, they attacked with Tarmogoyf and played an additional one. I then drew and cast a Gitaxian Probe which revealed a Tarmogoyf and a Verdant Catacombs for my opponent. I drew the land I needed off the Probe and attacked for lethal. 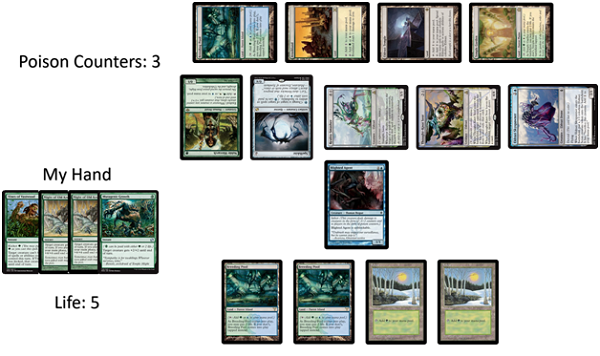 My opponent had a Spellskite out for the majority of the game, and it was rather effective in hindering my game plan. I was only able to chip in for couple points while I stared at my hand full of pump spells. I just drew a Mutagenic Growth, and Iâm dead on board next turn.

I needed to draw an answer to Spellskite.

I can just cast my pump spells and hope my doesnât remember their Spellskite.

It almost certainly wonât work though.

I need them to not use Spellskite, but I canât picture a scenario in which they donât.

How do I win this?

I can use Vines of Vastwood on their Spellskite.

If they're unfamiliar with the interaction, they may think it prevents them from redirecting spells to Spellskite.

I donât see how I win this game another way.

I have to hurry up though.

If this worked, I obviously wouldâve done it right way.

If I take much longer, it looks suspicious.

I guess I just go for it.

It was still a longshot, but this seemed like it was my best chance to win the game. I used Vines on the Spellskite, and then proceeded by casting Might of Old Krosa on my Blighted Agent. My opponent thought for a moment and then let the Might resolve. I didnât say anything during this exchange. After casting the Might, I attacked with Blighted Agent and used my Mutagenic Growth. My opponent conceded.

As you can see in each of the preceding scenarios, I acted within the confines of the rules and my sole intent was never anything but winning the game. But in each scenario, I was relying on my opponent misinterpreting my actions in order to do so. This is where the subject can be ambiguous. Do you consider any of these plays to be unethical? Whatâs the difference between an ethical play and an unethical play, and where do we draw the line? The answers to these questions arenât clear and are largely subjective. But if the community as a whole was able to reach a general consensus on them, it could be massive step toward standardizing ethical play at all levels of the game.