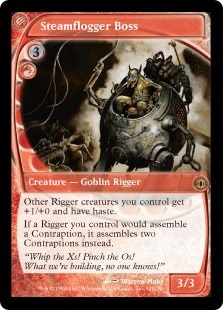 My grandfather worked in the coal mines of West Virginia when he was young. Later in his life, he held civic offices and attempted to make the lives of average workers in his area of West Virginia better. Even later in life, as an elderly man, he would search antique stores for old hats, lamps, and other coal mining gear. He eventually had quite a collection. It was not uncommon for him to tell me about the coal mines when I was a boy. Showing me how all of the old gear worked together was something that made him smile.

This real-life personal history has given me a unique love for the Goblin Explosioneers of Unstable and their contraptions. Associating such a goofy faction from Magic with my late grandfather's life story may seem to be in poor taste, but I mean no disrespect. I simply mean that when I see characters in the game wearing hard hats and crawling through tunnels, weighed down with gear, I am reminded of the real thing. It makes me miss my grandpa. It seems to me that truly great games pull in just enough of real life to trigger emotions and light the fuse of players' imaginations. For me, the Goblin Explosioneers did that.

Within the Goblin Explosioneers there is a subgroup called the Steamfloggers. While most goblins in Magic seem to have a penchant for mining and building, the noun "Steamflogger" seems to indicate a specific group, or perhaps a trade. Magic players famously received their first look at a Steamflogger back in 2007's Future Sight with the card Steamflogger Boss.

Other Steamflogger cards include: Steamflogger of the Month, Steamflogger Service Rep, Steamflogger Temp, and the instant, Steamfloggery. The essence of the Steamfloggers (goblin riggers wielding hammers) can also be seen in: Joyride Rigger, Wrench-Rigger, and Work a Double. Additionally, Unstable includes a band of other hammer-loving goblins.

As of this writing, there are nineteen different legendary goblins in Magic. What if we turned a few goblin Commander decks into Steamflogger / contraption decks?

Why? Because it's fun! It doesn't matter that silver-bordered cards aren't legal in Commander games. The decks listed here are for kitchen table Commander and those who like Magic's self-deprecating side.

Due to space, I'm only going to look at three goblin commanders. But in case you're interested, here's the full list of legendary goblins. (You can also check them out on coolstuffinc.com)

And to complete the list, the planeswalker Commander, Daretti, Scrap Savant.

Additionally, we can take our cue from goblin decks of time immemorial: goblins fight best in numbers. Token Swarm for the win!

With these things in mind, of the 45 contraptions available to us, I would pick the following 15 for goblin Steamflogger Commander decks:

These contraptions create more tokens. Or they reward you for having a lot of creatures. Or they give attackers haste and other bonuses. The tokens generated by these contraptions may or may not be goblin tokens, but when you're trying to win with a swarm strategy, any creature type will do.

I think whenever you start talking about goblin Commander decks, Krenko, Mob Boss is sure to come up. He's fun to play and superfast. I've seen him make 40 or 50 tokens in just a few turns. Imagine combining him with the contraption, Hypnotic Swirly Disc! In fact, I recently faced Krenko in a 3-person Commander game and was knocked out on turn five. (I was running Ghost Council of Orzhova and still casting my set-up cards.)

And because Krenko was recently reprinted in Duel Deck: Merfolk vs. Goblins, he is a relatively inexpensive commander to acquire and build around. So let's start with him. Can we turn Krenko, Mob Boss into Krenko the Steamflogger?

I based this list on the deck that beat me on turn five. (Thanks, J.R.!) I pulled out some of the most expensive cards and subbed in our Steamfloggers in order to keep this deck at least somewhat inexpensive.

Two non-goblin cards made it into the deck (the Moggcatcher was in the original list). This decision may be anathema for a Krenko deck, but these changes will help get our contraptions online. I pulled Siege-Gang Commander in favor of Garbage Elemental (the 3/2 version, which makes more goblins). Foundry Street Denizen was pulled for Cogmentor.

The Countdown is at One is another unique addition to this deck. It should work really well, given how fast and cheap goblin spells are, you are almost sure to win the sub-game. And the other oddball card, Yet Another Aether Vortex, will make this deck even faster.

Shattergang Brothers was printed in the Commander 2013 deck, Power Hungry. In that deck they can be used as an alternative commander to Prossh, Skyraider of Kher.

Shattergang Brothers is the only legendary goblin card which includes the three colors with which goblins are most often associated: Red, Black, and, to a lesser extent, Green. They also look like they could be part of the Steamflogger trade already. They are holding artifacts that look like contraptions. 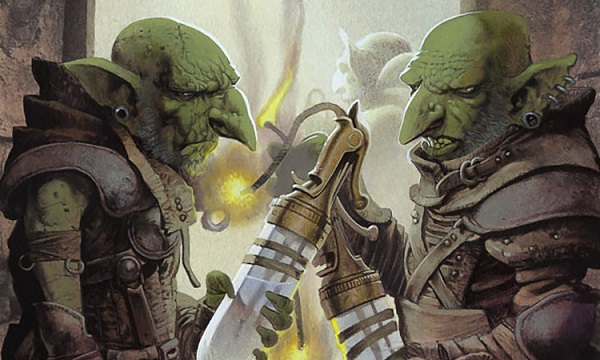 To me, Shattergang Brothers is a utility card. It has three different spot-removal abilities. It strikes me as a great commander for the Steamflogger treatment because its abilities are likely to create fun, interactive games. The Shattergang Brothers don't bowl you over like Krenko. They sort of play with their opponents for a while (until someone dies).

For this experiment I've started with the original Power Hungry deck list. Inserting our core of Steamflogger creatures and other spells, we have the following:

I've made many changes from the Power Hungry deck list. A few of them are more notable than others.

For example, the Archetype cycle from the Theros Block make good sense in this deck. They can be used targets for both the first and third abilities. The artifact lands -- Great Furnace, Tree of Tales, and Vault of Whispers -- can be similarly used as a target for the second ability, saving you from sacrificing some of your other, more powerful artifacts. And along these same lines, Hammer of Purphoros is not only a haste enabler for all of our tokens, but it can also be used to power abilities one and two.

In the list of lands, I cut Temple of the False God for Watermarket and Terramorphic Expanse for Secret Base. I also cut Khalni Garden for City of Ass (this is an Un-deck after all). Having access to all three of our colors early in the game is more important than a 0/1 Plant token we have few ways to bolster.

Plague Boiler is a powerful board wipe that got cut, but it would destroy the contraptions this deck wants to build. Krark's Other Thumb is more helpful as it will aid us in all of our dice rolling.

Hua Tuo, Honored Physician was cut for Steamflogger Service Rep. Not only is this card easier to cast, but it enables us to get our contraptions going. A much stronger game plan in this deck than Hua Tuo's ability.

Both Tooth and Claw and Vile Requiem are not in sync with the flavor of Steamflogger. Just Desserts and Work a Double are, though.

Of the three decks in this article, Steamflogger Brothers is probably the least goblin-y, but it should create lots of fun, unstable games. Don't forget, all the contraptions you get online can be used to fuel Shattergang Brothers second ability. Come at me, Sydri deck.

Steamflogging is a Family Affair

As with the first two decks, this deck will generate a lot of tokens. But this deck is unique from the others because it enables you to cast instants and sorceries more easily. With any luck, cards like Work a Double and Steamfloggery can be played on turns two or three.

Some of the changes in this list are the same as the previous lists (e.g. Temple of the False God for Watermarket). One notable change is Rampant Growth for Selfie Preservation. If you choose your nonbasic lands wisely (including your Mountains) these two cards are an equal trade.

This deck, and our contraptions, make numerous tokens that may not be goblins. (I love Symbol Status!) Make sure you pick the right token artwork in order to get maximum usage out of Goblin Haberdasher.

Each of these lists is, for the most part, a budget list. Because we're playing fun, silver-bordered games, it didn't seem necessary to go overboard on spending. If you want to make these decks more powerful you can always add cards like: Xenagos, the Reveler, Avenger of Zendikar, the mighty Purphoros, God of the Forge, and many others.

And if the lists are too expensive for your silver-bordered budget, then consider cutting cards like Sol Ring, Lightning Greaves, Eldrazi Monument, Parallel Lives, or maybe some of the lands. In the Raidmother deck, I would be careful about cutting the non-basic Forests though. They are excellent targets for cards like Skyshroud Claim.

There is so much unexplored space here! There are so many other goblin Commander decks that could be turned into Steamflogger decks. Just think about the possibilitiesâ.â.â.â

In the comments below, or on Twitter (@Steamfloggery) tell me:

Look for more silver-bordered, casual antics in future columns. And may you always draw Krark's Other Thumb in your opening hand.