âTurn one, cast every spell in my deck. Go.â

Mana Crypt is a very powerful accelerant, but never more than when it's working with Mox Opal to get the Grim Monolith/Power Artifact combo online immediately for infinite mana. The fact that this combo also gives you infinite Grim Monolith untaps means that when you use Planar Portal to fetch up Clock of Omens, you can keep untapping the portal to fetch out every card in your deck, most likely starting with Mirrorworks and Mycosynth Lattice.

Of course, that line of play doesn't even use Arcum Dagsson. Any deck containing blue could run all the necessary cards. Arcum decks are simply more likely than most to run the kinds of artifacts that accidentally assemble into insane combinations. Based on the cards, it looks like Arcum spent his time turning hulking robots into weathervanes and whistles, but in my experience, the players who pick him to command their decks aim a bit higher.

Some people love this type of Magic, where the power level is sky-high and the decks around the table are all capable of winning decisively out of nowhere. There is definitely something to be said for being able to get in four games every one hour instead of one game every four hours. One of the things that makes this game so great is that it can be so many things to so many different people.

I've wanted to make a 3D Arcum Dagsson for a long time. While it's not my style of deck, Arcum fits my main criteria for a great 3D commander: fantastic art and a build-around-me ability. Braids, Conjurer Adept was one of the first mono-blue legends I cut to pieces, and her card hits on both of those points as well. 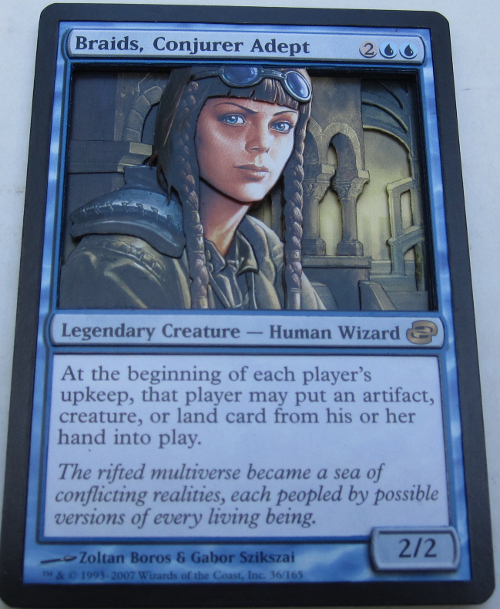 Construction of a 3D Arcum Dagsson has many similarities to the process I used to make the 3D Agrus Kos a couple weeks ago. Both cards have the named character in the foreground, buildings in the background, and a large metal object in the middle. If you want to make a simple 3D version of Arcum, you can probably cut those three layers fairly quickly.

Despite the similarities, this 3D Arcum Dagsson took quite a bit more time to create. That's because each of the three zones on Arcum is more complicated than the corresponding zone on Agrus Kos. On Agrus Kos, there was only one building in the background; on Arcum, I cut these four pieces to make up the buildings and walls of the ruins in his background: 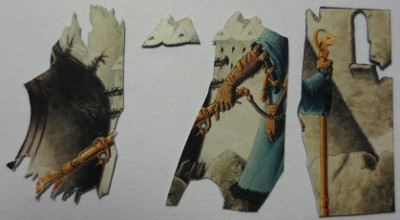 On the completed card, the center two pieces slightly overlap the piece on the left. The wall piece on the right is farther forward than the other pieces; I accomplished this by cutting a few small bits of cardboard for it to rest on.

The final element of the background zone is the leaning pillar: 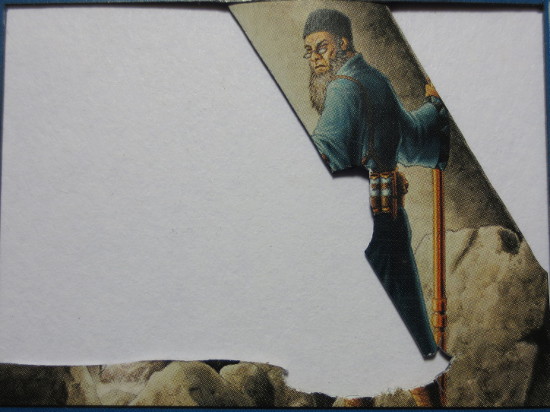 In order to make it look more like a pillar instead of just a flat slab of concrete, I cut away the top and side of the pillar from the edges of the card so I could round the cardboard.

Next, I worked on the broken-down robot that Arcum is salvaging. My basic layer for this zone looked like this: 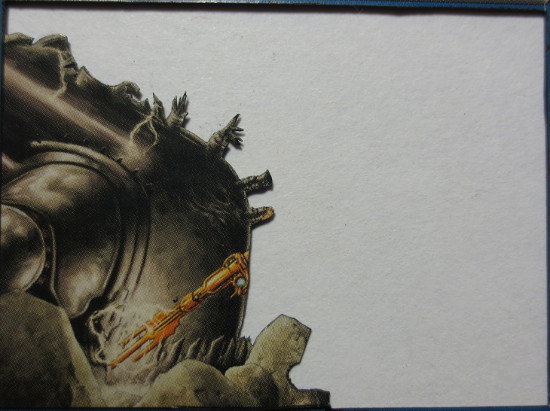 Just like on the pillar, I cut away part of the robot from the frame so I could round the top and sides of the beast. The detail pieces used on the robot are the four on the left here: 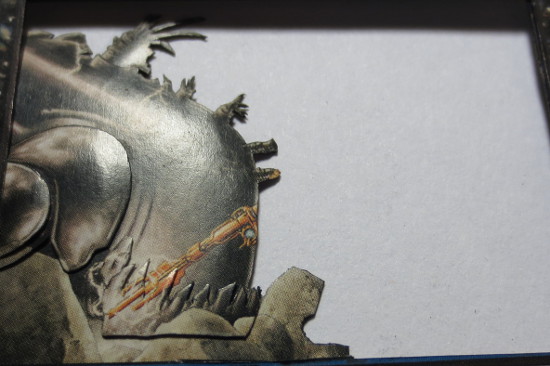 The line of rocks that separates Arcum from the robot took a couple of basic layers and a couple detail pieces. Here are the layers I made for it:

The other two rocks ended up being detail pieces. They probably could have been part of other layers or layers of their own, but I missed that possibility during the planning stage. By the time I realized that, I had already cut up too many of my layers and copies of Arcum for that to be an option.

Between the two rocks are the three arcs of energy. The middle one wraps around Arcum's wand and over to the robot, while the other two weave through the broken appendages on the top of the robot. Cutting, shaving, and gluing those tiny pieces was the hardest part of making this card by far.

Arcum's body was challenging as well, but compared to the energy arcs, he was a piece of cake. It started with this basic layer: 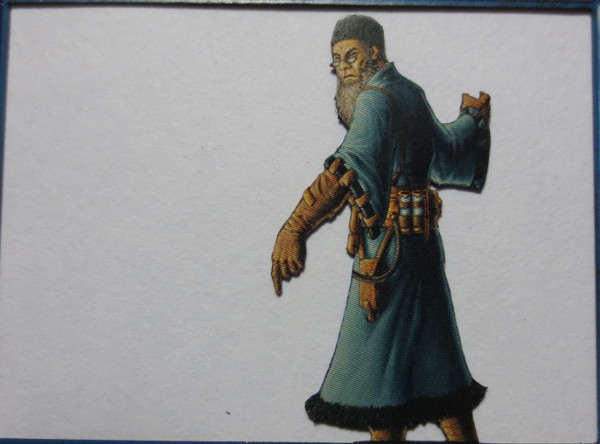 Of that layer, in the end, only Arcum's head, legs, and arms are visible. The rest is covered by these detail pieces: 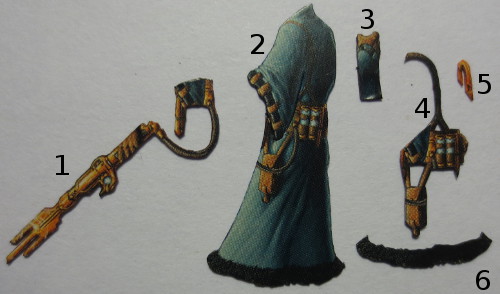 After assembling the pieces of Arcum and attaching them to the rock layers, it looked like this: 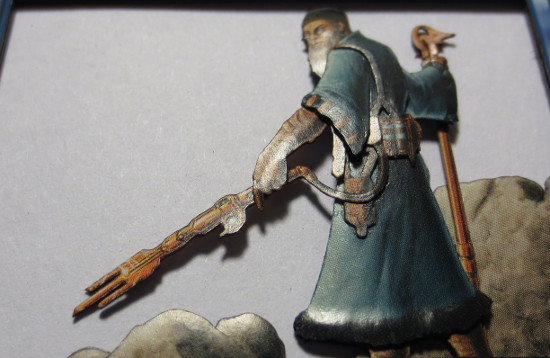 There are a couple of different techniques I use on the border of the 3D cards I make. For Arcum, I went with my less-frequently-used method of cutting out all the info boxes and pin lines as one piece, plus the black border. 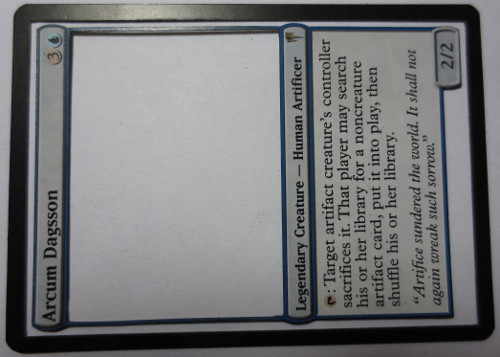 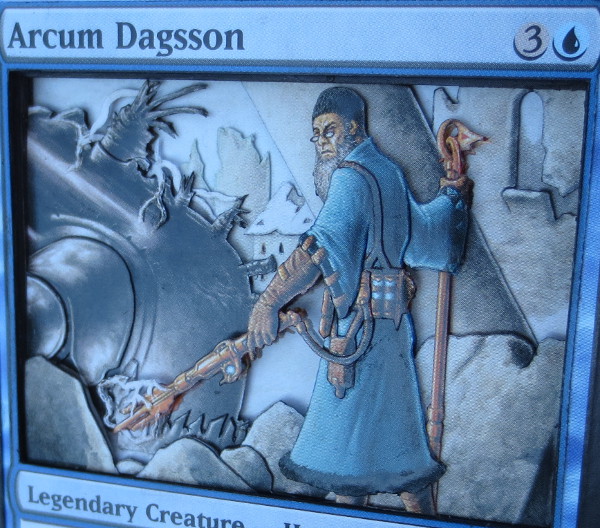 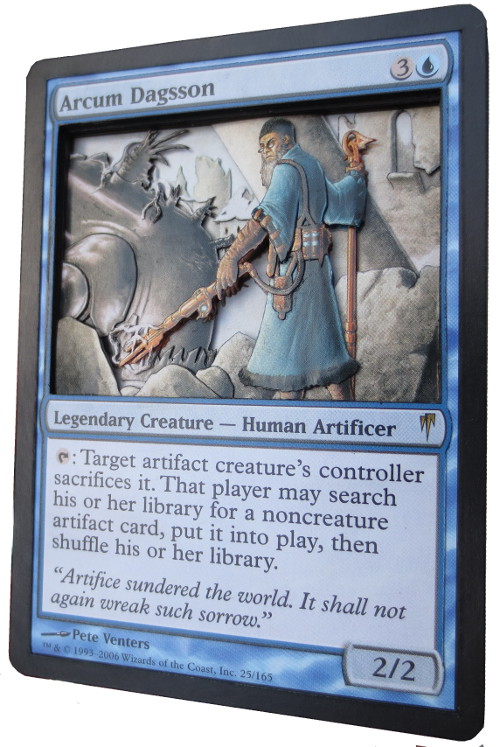 It's incredible to me that despite the turn-one play I described above, that Arcum deck probably isn't the most degenerate mono-blue deck I've seen. That honor would go to one led by The Pink Lady: 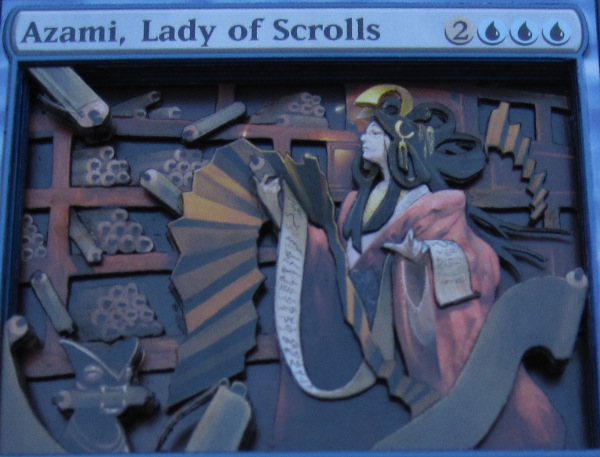 What's the most broken Commander deck you've ever seen? Was it something you faced down, or did you assemble the killer stack for yourself? Let me know in the comments!

Meanwhile, if you want to give Arcum a spin and maybe try out the more cutthroat side of Commander, consider checking out The Arcum Asylum, Sean Patchen's old blog, or his more recent writing on CommanderCast.com.