The concept of controlling your opponent has been in Magic since the beginning of the game. Back then, you could steal away a creature or artifact with Control Magic or Steal Artifact or force your opponent to cast a spell with Word of Command.

It's no surprise that over the years, these types of cards have proven very popular. On the second episode of Mark Rosewater's new podcast âDrive to Work,â he and Jeremy Jarvis talked about how Jace was designed as a sort of player analog. Apparently, the concept of using the power of your mind to defeat your opponents is appealing to many of the same people who enjoy Magic.

It's not all about stealing, though. The flavor used to represent mental magic in the game is quite varied. So, which mind-altering effects are the best?

Itâs the same effect as the original Control Magic, just with 1 extra mana in the cost and a couple dozen fewer words in the text box. Despite that extra mana, Mind Control was found to be one of the most powerful cards in core-set Limitedâeventually leading to its replacement by Switcheroo.

While Thoughtseize has the better name when it comes to mind-altering discard spells, the flavor text on the Seventh Edition Duress pushes it over the top. The ability to tear ideas from your opponent's mind is almost as powerful as stealing them for yourself.

The aforementioned Word of Command is next on the list, with its ominous eyes peering out of the shadows, drawing you in, hypnotizing youâ.â.â.âThe text is even intentionally confusing; after reading it for the third time and still not understanding it, your opponent's brain will be softened up and ready to go along with whatever you say.

Itâs one of the most powerful and versatile Magic cards of all time, winning tournament after tournament in every format where it has ever been legal and banned in everything short of Legacy and Vintage. So, does that mean it's better than all? Not quiteâ.â.â.

What's better than altering your opponent's mind? How about completely dominating it? When Mark Rosewater first spoiled Mindslaver, I was blown away. Completely new effects will do that! The amazing Mindslaver stories that came out of Pro Tour: New Orleans that year cemented its place as the best mental magic spell of all time.

For today's article, I turned my blade to the âMasters of Your Mind,â the Sen Triplets of Esper. I'm certainly not the first person to alter the Triplets, who have been turned into everything from the Powerpuff Girls to Rafael's Three Graces. 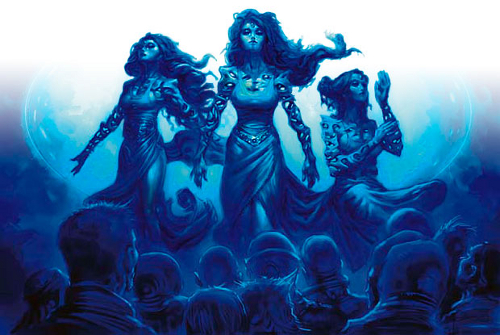 The first thing I did when I started working on this 3D Sen Triplets was determine how many layers I would need for the crowd in the foreground. With each copy of Sen Triplets running $7, I wanted to be sure not to destroy more cards than necessary.

The way to determine how many layers are needed for an area is to look at how many consecutive overlapping pieces there will be. This is what I came up with for the crowd:

In each of those two clusters of heads, Head 1 partially overlaps Head 2, which overlaps 3, and so on. This meant that at a minimum, I would need four separate layers of heads. Next, I had to figure out what heads needed to be cut and which of them would be part of basic layers, still attached to the border of a card, and which would be free-floating detail pieces.

I was working with these twelve heads:

I assembled those layers with some spacers between and in front of them to provide room for the other heads to fit. At this point, I also added the top frame of the card, which came from a foil copy of Sen Triplets. 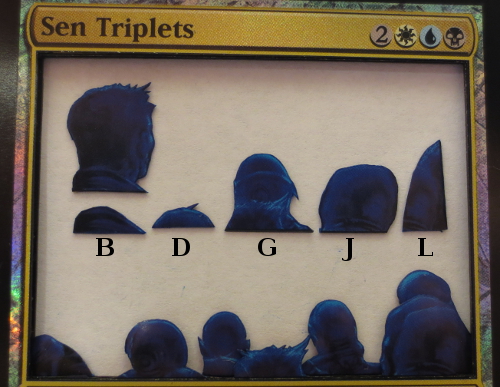 The one extra piece, B2, is Mr. B's collar. Because Mr. B's head was going to be in one of the top layers of the card, I shaved his collar thin so it didn't stick out even farther.

Rather than simply throwing away the art from the foil Sen Triplets that was used for the frame, I chose to use it for the metallic bean in the background. Foil cards are difficult to cut and even harder to shape, but eventually, I was able to round the piece enough and shave the edges so it would be smoother against the far background.

The foreground and background complete, it was time to work on the triplets. I decided to make each of their heads a detail piece, which meant that my basic layers would be mostly headless. The two Sen sisters in back were built on this layer: 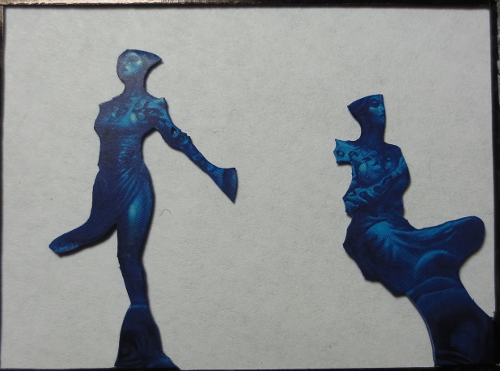 Each of those sisters was missing an arm or two, which I made up for with these detail pieces:

The piece on the left was the right arm of the triplet on the left. The other three pieces made up the arms of her sister. The middle two pieces together made up her right arm, so the forearm piece had to be shaved thin in order to not look too bulky.

The final sister was built on this layer: 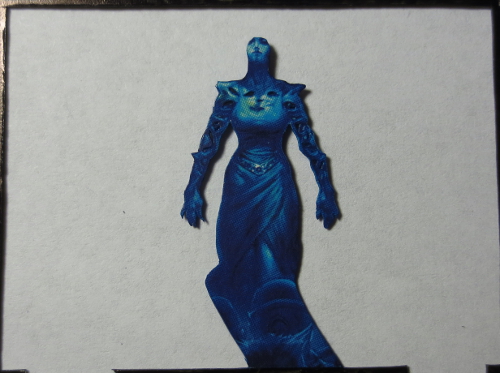 Cutting all of the holes in the etherium of the arms was the most challenging part of making this card. While I'm quite happy with the result, it's not perfect, and I am sad that I haven't yet found a great way to cut tiny holes.

Each of the triplets received two more detail pieces: one for her face and part of her hair and the other for the hair behind her back.

The final detail pieces made up the flowing robes and missing leg of the triplets in the back. With everything cut, I moved on to assembly. 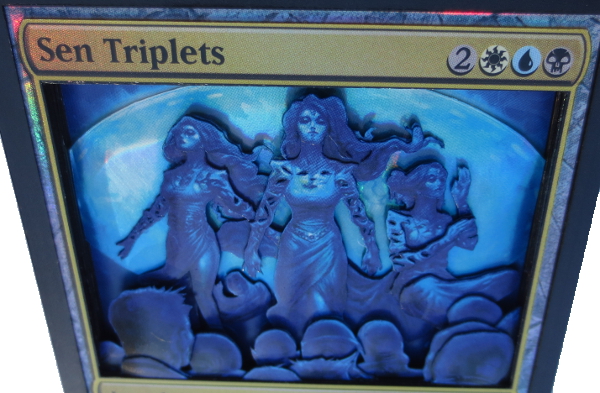 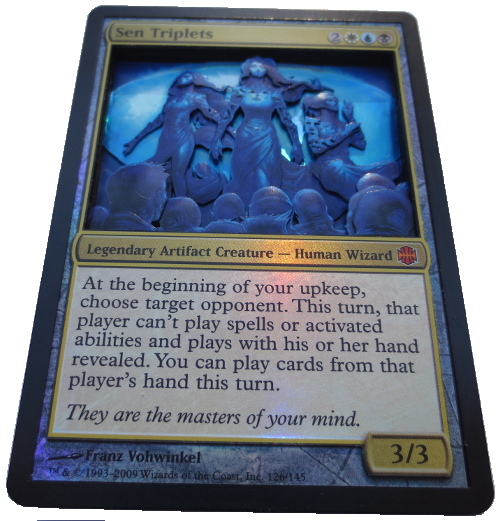 This particular Sen Triplets belongs to Dan Powers, and the deck it commands was featured on last week's CMDR Decksâcheck it out!

The Sen Triplets aren't the only trio of legendary ladies I plan on turning into a 3D cardâthe Sisters of Stone Death will be coming soon. Trostani, Selesnya's Voice and the Vendilion Clique are other trios that would also be fun to 3D, but they're a bit expensive for me to afford to destroy!