In this experiment, we jam our library full of spells that will allow us to summon the direst of deep-sea creatures of the Multiverseâon a quest to use Zendikar and Theros magic to overwhelm our opponents with waves of massive creatures. 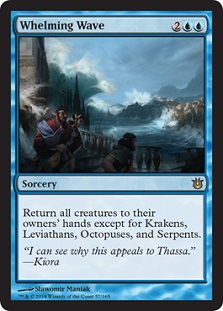 Whelming Wave is a pretty interesting card. Itâs cheaper than Evacuation, but itâs a sorcery instead of an instant. And it doesnât affect Krakens, Leviathans, Octopuses, or Serpents. We could just play it normally as a control card in the vein of Devastation Tide, but the tribal component seems interesting. We could build a deck full of cheap creatures that help us ramp and then can be recast for more value after the Wave, but it does say, âKrakens, Leviathans, Octopuses, and Serpents,â right on the card, and I do prefer going all-in.

That means Iâm going to want to play a whole bunch of those guys. The problem, of course, is that creatures of that variety tend to be quite expensive. Oh, and we want to take advantage of any tribal components we can find. Unfortunately, the undersea-creature tribe doesnât really have a direct mechanical link in Magic, which is why Whelming Wave and Quest for Ula's Temple have to call out four creature types separately.

Oh, rightâQuest for Ula's Temple. The next question might have been, âBut what other cards can we play that will reward us for playing a bunch of creatures of these types?â Coat of Arms, Door of Destinies, and Adaptive Automaton are all out, both because I find them somewhat lacking in distinct tribal flavor (they have no dedication to any tribe, floozying around between various creature types!) and because they wouldnât actually work unless we picked just a single massive-undersea-creature type.

Now, Whelming Wave isnât really a card we can build around and expect to have carry the game for us, but it is the inspiration for todayâs deck, and it is a way to slow down our opponents or help ensure a winâwith quite a bit of plane- and sea-inspired flavor. Quest for Ula's Temple, on the other hand, is a card thatâs been around for a while, and casual players worldwide, Iâm sure, have made plenty of sweet, if underpowered, concoctionsâand ours today will be no different. In fact, I even had a casual, Standard Ulaâs Temple deck on Magic Online back in the day, featuring such all-stars as Archmage Ascension.

Playing consistently with Quest for Ula's Temple poses two challenges. (As an aside, for those of you unversed in Zendikar lore, Ula was the name of a god merfolk worshipped, but come Rise of the Eldrazi, they discovered the name had been bastardized from the ancient name Ulamog, the Infinite Gyre and that theyâd inadvertently been worshipping an Eldrazi all along. Similar stories for Emeria and Cosi.) The first challenge is triggering the Quest, on either end. First, we need to make sure to fill the deck with creatures to build the Quest up to 3 counters. We then need to make sure we have Krakens, Leviathans, Octopuses, and Serpents in our hand that will make our work, both in gameplay and in deck-building, worthwhile.

The second challenge is drawing and casting the Quest in the first place. Fortunately, it only costs 1 mana, but we can only have four in our deck, which means we need one or more cards to serve as forms of redundancy. For a deck that wants to win but isnât dead-set on it, answering the first challenge is easy: We just jam-pack our deck with creature cards. Weâll need some utility, and of course we have to play lands, but Iâm sure we can stuff a bunch of dudes in. And as long as all or most of them are undersea monsters, weâll have plenty to do with the Quest for Ula's Templeâs second trigger, and we wonât have to fear the repercussions of our own Whelming Waves.

As for answering the second challenge, there arenât a ton of good options. The cheapest tutors for enchantments are Demonic Tutor, Sterling Grove, Enlightened Tutor, and Idyllic Tutor. Of those, Sterling Grove is the cheapest at $6, but it also puts us into three colors, forces us to wait at least until turn four to cast our Quest, and costs us a card. (Because it puts the fetched card on top of the library, it doesnât replace itself and thus is card disadvantage.) While I donât mind running expensive cards in these experiments, those four are all quite powerful and are expensive for their prevalence in powerful decks. I prefer finding subtler answers when I can, and none of those is the perfect card Iâd want anyway, so letâs keep looking.

Therosâs new Commune with the Gods is a much less expensive option for us here, and itâs quite on-theme: We Commune with the Gods to discover Ulaâs Temple. (Yeah, I know I just said Ula wasnât actually a god, but Zendikarâs merfolk sure thought she was beforeâ.â.â.âwell, you know.) We can use this 2-mana green spell to dig for a Quest if we donât have one, and we can always just grab a land to bring us closer to actually casting a Leviathan.

Spreading Seas is a cantrip, so it gives us an early play while helping us dig for a Quest. It can also slow down an opponent by keeping him or her off one or more colors, and depending on what undersea monsters we want to run, it can enable them to attack by making the defending player control and Island against his or her will.

Woodland Changeling and Turtleshell Changeling are kinda like cheating when it comes to tribal, but thatâs what they were made for after all. They give us a couple options for early plays, which can be important for blocking early or for creating the semblance of a defense in multiplayer. Turtleshell Changeling has the bonus of being a sea creature, and Iâm sure it would enjoy its day as an Octopusâ.â.â.âor Krakenâ.â.â.âor whatever you want to call it. Plus, we need to have as many creatures in the deck as we can fit, and they canât all cost 7 or more. Well, I guess they couldâ.â.â.â

Anyway, from this point, we can stuff a bunch of Krakens, Leviathans, Octopuses, and Serpents in. Deep-Sea Kraken can come out cheap on its own using suspend, Inkwell Leviathan is renowned for its power, and Stormtide Leviathan may be the most consistent and powerful creature in the category, acting both on offense and defense. Polar Kraken has a steep cost, but I couldnât put together a whole sea-creature-themed deck without giving a nod to some of Magicâs old, terrible, big, blue creatures. Trench Gorger can remove all excess lands from our library once it hits the field, which would be great for triggering Quest for Ula's Temple if having the Trench Gorger on the battlefield didnât imply weâd already completed the Quest. Nonetheless, he can keep gas flowing once our Quest is online. One each of the legendary Octopus Lorthos, the Tidemaker and of the new legendary Kraken Tromokratis seem like plenty, just to make sure we arenât stuck with duplicates in our hand. Finally, Sealock Monster serves as a nice middle ground between castable and powerful, and if we are able to monstrify one of these guys, itâll be just as big as its deep-sea allies.

Rounding out the deck, I couldnât resist a single Kiora, the Crashing Wave. I didnât want to add green initially, but given that weâre in these colors and creature types, it seems silly to not consider her. If her ultimate ever fires, sheâs like the whole deck by herself. Thassa, God of the Sea is also somewhat obvious, fitting the theme perfectly apart from not actually being a Kraken, Leviathan, Octopus, or Serpent. Her scry helps set up the Quest, as does the fact that sheâs a creature card while in our library, regardless of devotion. Speaking of creature cards, Dryad Arbor is both a land and a creature, meaning we can develop our mana while gaining quest counters for Ulaâs Temple.

If youâve ever wanted to play around with Quest for Ula's Temple, well, youâve had plenty of time to do so since its release in Worldwake. But if you never did, or if you might like adding some Evacuation action in the form of Whelming Wave, this list is for your consideration. And donât forget that the Quest triggers at the beginning of each end step, just like Kioraâs emblem, so that means a Kraken on your turn and a Leviathan on the opponentâs turn. And if you just have one deep-sea creature, consider dropping it at the end of your opponentâs turn for the surprise factorâunless, of course, you need it to block. Oh, and in a multiplayer game, just make sure your hand is fully-stocked with monsters.