In this experiment, we raise zombies from the grave, often the same ones repeatedly, and explore two different scourges.

Itâs time for Shadows over Innistrad already, so I picked out a previewed card and started poking.

But nothing stuck, and trying to build a deck around one card led me to discover a synergy Iâm only about a year behind on.

If youâve come by here often, you probably already know to bring your Phyrexian Altars with you, so go ahead and pull those out now. So, Scourge of Nel Toth requires two creatures and 2 mana to bring back from the grave, and with Phyrexian Altar, one creature is 1 mana, so in effect, we need four creatures. Add in Pack Hunt, and weâre ready to go.

, and to satisfy the two-creatures requirement of Scourge of Nel Toth. When the Dragon enters the battlefield, it will trigger the Thralls, returning them to the battlefield. Since we already have Phyrexian Altar, we may as well sacrifice the Scourge for

and repeat. In that way, we can generate infinite black mana. And if we happen to only have three Thralls, we can perform the loop by having Scourge of Nel Toth help pay for its own resurrection. However, we wonât be actually benefiting.

That is, we wonât be benefiting unless we have Golgari Germination. In that case, weâll make four Saprolings for each iteration, which essentially means weâre making

extra. So now we only really need one Bladewing's Thrall. After sacrificing the Thrall and one creature (may I suggest a Saproling?) and paying

upfront, we can return the Scourge and then the Thrall and make another Saproling. Sacrifice the Scourge for

, sacrifice the other two for the Scourgeâs ability, and return the Scourge and Thrall, making two Saprolings this time. From here, we can repeat the process without spending any more mana from our landsâbut we wonât actually be benefiting.

That is, we wonât be benefiting unless we have another Golgari Germination.

Since we already have Pack Hunt for finding all our copies of Bladewing's Thrall, it seemed reasonable to play another four-of we want to collect. Undead Servant isnât a super-exciting card, but it is interesting, and it has the potential to generate 8 power for 4 mana. Having four creatures instead of one is also an exciting prospect when we have Phyrexian Altarâit only pays us back if weâre doing direct mana conversions, but itâs something to keep in mind.

And hereâs where my initial Shadows over Innistrad investigation comes back into play. 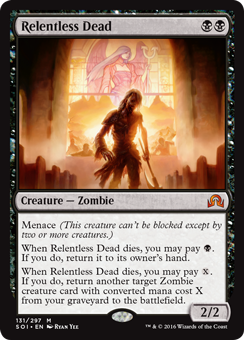 (which we can gain from sacrificing it to Phyrexian Altar), though âbringing it backâ in this case means sending it to our hand. It can also Zombify a Zombie if we pay the converted mana cost of the card in question. And if the card in question is Undead Servant, the mana it can make with token sacrifice offsets the X we pay for Relentless Dead. So by sacrificing everything and paying for all those triggers, we end up 2 mana behind because now the Relentless Dead is in our hand.

But we happened to have sacrificed two nontoken creatures, so if we have Golgari Germination, we can generate that

with Saprolings. Clearly, this was a lot of work for no actual gain. We start benefiting from the loop once we have two Germinations, but you see why this article is titled after Bladewing's Thrall and Scourge of Nel Toth rather than Relentless Dead and Undead Servant.

However, both these cards should provide the deck bits of incremental value on the way to assembling all the Thralls and Altars we need. And the Relentless Dead is also very useful once we have infinite mana.

The Undead and the Dead

Here are some more cards to round out the deck and finish off our opponent(s) when weâve achieved archlichdom.

Vitaspore Thallid â This one-of is around to make use of all those Saprolings we can make with Golgari Germination. When we can make infinite Saprolings, we can give any and all of our creatures haste, meaning as soon as we go off, we can end the game in that combat phase.

Deathspore Thallid â Platinum Angel keeping you down? This Thallid makes use of all our Saprolings to kill all opposing blockers and threats.

Llanowar Dead â We have some important 3-drops, but we also have a lot of important 4-drops, and acceleration is always nice. This might not be integral to the deck, but I enjoy extra mana, and she is a Zombie. I like to have her around whenever I have the excuse.

Chameleon Colossus â More Changelings were in the list at some point, but only the strongest survived. While this deck may appear to be a Zombie deck, there arenât actually any cards other than Relentless Dead that care about that. We do care about Saprolingsâin that Vitaspore Thallid and Deathspore Thallid can sacrifice them for effectsâbut thatâs not why we have the Colossus either. Rather, the tribe we care about here is Dragons. When we resolve a 4-mana Chameleon Colossus, we can return our copies of Bladewing's Thrall from our graveyard to the battlefield.

Sidisi, Undead Vizier â Corpse Connoisseur is also a good option here, but I picked Sidisi because I resort to the Connoisseur so much and because Sidisi is newer. Also, weâll probably want to find Phyrexian Altar, Golgari Germination, or Pack Hunt frequently, and Connoisseur canât do that. The best creature to sacrifice is probably Bladewing's Thrall because it can come back so easily, though Saprolings can be pretty expendable as well. (And try to keep a Thrall around if you think youâre going to Pack Hunt it.)

Baloth Null â Imagine having infinite mana. What do we do? Start spending the mana to relentlessly loop Relentless Dead, returning every creature card from our graveyard. Use Sidisi repeatedly to find all the necessary tools from our library so we can make infinite Saprolings (or maybe Zombie tokens or maybe an infinitely large Chameleon Colossus or four) and give them haste and attack for the win. Did I just hide the deckâs actual game plan in a blurb about a card I havenât actually discussed yet? Yes. You see, if we have infinite mana and are looping Relentless Dead and Sidisi, Undead Vizier to find and bring into play everything we need, weâll be out of luck if Vitaspore Thallid is dead. In this case, use Baloth Null to bring it back.

Deathbringer Regent â Perhaps this makes Deathspore Thallid irrelevant. Itâs another Dragon, so we can wipe the board and potentially have 12 power in Thralls immediately return to the battlefield. But if we have infinite mana, we can use this to wipe the board and then use Relentless Dead triggers to start rebuilding from our graveyard. Given that we fill our mana pool sufficiently before bringing the Regent out, weâll be able to bring everything out, make infinite Saprolings, give them haste, and win against an empty board. The Regent can also deal with things that have hexproof that the Thallid canât. The Regent is also another reason to have Baloth Null: This Dragon isnât a Zombie, so Relentless Dead canât touch it, and even if it could, putting it onto the battlefield that way wouldnât trigger it since it wasnât cast.