In this experiment, we take a second to harvest all those swarming Saprolings in an eternal utopia.

So check this out:

. With Cackling Counterpart, we basically have a spell we can cast with buyback for

that gives us 2/1 creature tokens. Thatâs not new though. What is new is Second Harvest. 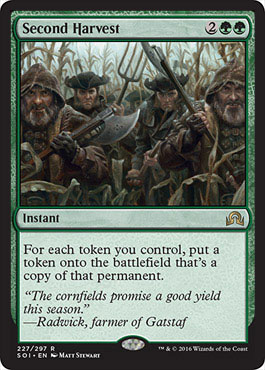 each time, if we were to have tokens that produced at least that

, we could repeat the process as many times as we want, gaining value in some other way Iâm sure we could figure out.

But that means weâll need tokens that can give us manaâand they need to do it immediately after entering the battlefield. One way to pull it off might be with a couple token copies of Burning-Tree Emissary. Or we could have a Concordant Crossroads with some Llanowar Elves tokens made by Llanowar Mentorâor similar, but unnamed, tokens made by Freyalise, Llanowar's Fury.

But I went down a different route.

As soon as Utopia Mycon surfaced in my searches, I knew what I needed to do. This guy is like a Phyrexian Altar for Saprolings, it only costs

, and it even makes Saprolings of its own. To go infinite, weâll need four Saprolings, Utopia Mycon, an Eternal Witness token (which probably involved a Cackling Counterpart), and Second Harvest. Thatâs kind of a lot, but we can hope our deck does some things along the way and doesnât actually fold when not everything comes togetherâor at least that it might be able to hold out until it does have everything come together.

Thallid Shell-Dweller â This 0/5 will help stall out while making the Saprolings we need.

Sprout Swarm â A popularly powerful card, Sprout Swarm will be great for us here. Itâs 1 more expensive than Sprout, but it has buyback and convoke, so we can cast it every turn, spending creatures as mana without sacrificing them and without going down a card. Later in the game, we may even be able to cast it multiple times a turn, perhaps without spending mana, and it can even be used as a bought-back Fog by creating a token to chump-block a dangerous attacker.

Vitaspore Thallid â Weâll want to win the game at some point, and I greatly prefer to do so the same turn I go infinite. Haste-granting creatures tend to allow that kind of thing, even if we have to sacrifice a 1/1 to give another 1/1 haste a hundred or so times.

Druid's Deliverance â Hereâs another way to stall the game while making tokens. âIâll prevent all that damage to meâ.â.â.âand produce another Saproling.â If we already have an Eternal Witness token, this essentially has buyback. (Though remember those Witnesses arenât Saprolings, so they canât stand in and make mana with the Mycon.)

Psychotrope Thallid â This guyâs activated ability costs us Saprolings for cards. Cards are certainly valuable, and we donât mind sacrificing chump-blockers, but we also need a critical mass of Saprolings to combo off. However, when we are comboing off, sacrificing excess infinite Saprolings to draw the cards we need to win (notably Vitaspore Thallid) will be totally worth it.

Rite of Replication â The two copies of this are copies five and six of Cackling Counterpart. Itâs not an instant, it doesnât have flashback, and it costs more mana, but we have more ways to make our Witness token, and that kicker cost is perhaps the most famous of kicker costs. We can use this in the late game to make all the Saprolings we need in one burstâor to return five cards to our hand with a bunch of 2/1 Humans.

Feral Incarnation â I just love this card. Maybe itâs the art, or maybe itâs the allure of three 3/3s for 0 mana. This doesnât particularly play into the combo, but it does serve as a potential noncombo win condition.

So I basically put together a Thallid deck with a combo in itâand Iâm perfectly content with that. But here are some more options, both Thallid and non-Thallid.

Sporesower Thallid â This makes all our Thallids spit out Saprolings more quickly. Itâs also a 4/4 for 4. We donât really need the beef as much (if weâre going for the combo), but the efficiency for making Saprolings is nice.

Saproling Burst â This can give us a bunch of Saprolings at once. For 5, we can make seven Saprolings. If we have Utopia Mycon and an Eternal Witness token, we can sacrifice four of our new Saprolings to pay for Second Harvest, giving us three more Saprolings and another Eternal Witness token, returning the Second Harvest to our hand. We can then sacrifice four of those six to cast Second Harvest again and repeat, ending up with four Saprolings. Weâll end up with a few extra 2/1s, but ultimately, we wonât be pulling ahead with this plan. But if we had even one Saproling to start, we can go from eight to four and back to eight and so on. That lets us make as many 2/1s as we want, though we wonât have excess mana or Saprolings for things like drawing cards, or haste. But if we started with two Saprolings pre-Burst, or if we had 2 extra mana to help pay for the first Second Harvest, weâll be good to go. In retrospect, I recommend running Saproling Burst for this plan. Thereâs just no more efficient way to make all the Saprolings we need. (Thelonite Hermit is cute, too.)

Tezzeret's Gambit and Steady Progress â Weâre already playing blue for Cackling Counterpart (and Rite of Replication), so proliferating the spore counters on our Thallids comes at no cost but hard-to-come-by card slots.

So if doubling just once isnât good enough for you, if you needed another reason to burst out your Thallid deck, or if you want a chance to try out Phyrexian Altar for