In this experiment, we join giganto magic with Viridian Forest mana.

Commander (2015 Edition) has brought us a new, interesting take on Clones. This one is strictly better than Clone, giving us an activated ability we can use or ignore as we wish. 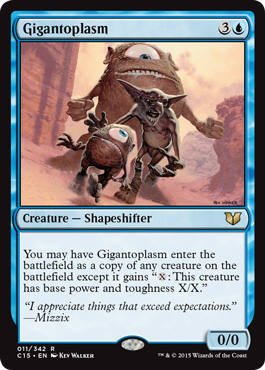 This lets us change the size of the copied creature, similar to how Quicksilver Gargantuan gives us a 7/7 versionâonly this time, we have a cheaper buy in and have to pay the mana for the size later on. But we can also change what we want that number to be. We could even make our Cloned creature smaller to sneak through with assistance from a Goblin Tunneler or to shrink under a Crackdown.

But more commonly, weâll want to make a copied creature bigger. And that begs the question of how often weâll be activating that ability. Will we just be activating it once to bring the creature up to a bigger size? Will we never activate the ability, keeping the mana available as a combat trick or to dodge a Swat? Or will we activate the ability over and over again, growing the creature each time?

This is the creature that came to mind for the last option. If we have a 1/2 and tap the Joiner-copying Gigantoplasm for 1 mana, we can activate the ability for that 1 mana and make the Joiner a 1/1. Thatâs not very useful.

Instead, imagine we have an Elvish Archdruid or even just a +1/+1 counter on the âPlasm. Now it will tap for 2 mana, and when we spend that mana on the activated ability, it will become a 3/3. Its base power and toughness will be 2/2, but with the +1/+1 bonus from either the Archdruid or the counter, weâll actually end up with a 3/3. Now the next time we tap for mana, it will be 3 mana, and activating the ability will yield a 4/4.

Having more bonuses, such as from an active Beastmaster Ascension or multiple +1/+1 counters, will make this sequence even faster. What slows us down the most is the requirement of tapping the creature. Prophet of Kruphix will speed things up, and donât forget that we can add mana from our lands to make this more potent, especially if we donât have anything else to do with that mana since weâre using our opponentsâ turns against them with the Prophet.

So the Viridian Joiner plan is the impetus for this deck, but there are some creatures Gigantoplasm will work great with. Specifically, these creatures tend to have 0 power and 0 toughness.

Plaxcaster Frogling â This is a 3-mana 3/3 for all intents and purposes. If we lead with this and then copy it, weâll have a 3-mana 3/3 and then a 4-mana 3/3. However, we can later activate the power-and-toughness-setting ability to change the pseudo-Frogling into, say, a 5/5â.â.â.âthat still has three +1/+1 counters on it, making it an 8/8. That could be as early as turn five with just the five lands, the Plaxcaster Frogling, and the Gigantoplasm. And we donât even have to commit up front. We can attack with the Gigantoplasm and hold up 2 to use the shroud-granting activated ability.

Phantom Nantuko â The classic combo with Phantom creatures, such as this and Phantom Tiger, is Armadillo Cloak. Itâs powerful because it gives the creature power and toughness that arenât directly related to +1/+1 counters, meaning, when the creature takes damage, the damage will be prevented even when counters run out. As printed, the creatures would die for hitting 0 toughness at some point, but the Cloak, +1/+1 counters, or activations of a Gigantoplasmâd Phantom ability will keep the creature alive through damage indefinitely. Of course, all conversations about Plaxcaster Frogling still apply here.

Scourge of Skola Vale â Iâm not sure which creatures weâre sacrificing, but this is another 0/0 creature that can work well with Gigantoplasm because of its built-in counters. The best creature to sacrifice will the one thatâs about to die for whatever reason.

Anthroplasm â This is another 0/0 that can start with its own countersâand itâs another plasm. Note that not all 0/0s work great with Gigantoplasm. Creatures with X in their costs often enter the battlefield with X +1/+1 counters, which, in the case of being Cloned, will mean 0, so we really have to stick with creatures that have set numbers of counters. Incidentally, Anthroplasm is like a single creature with a built-in Gigantoplasm superpower.

Spike Soldier â A 3/3 for 4 is nice, and again, weâre actually getting a 0/0 thatâs primed and ready to become massive when Giganto-Cloned. Spike Soldier is also ready to share its +1/+1 counters with Viridian Joiner or wherever is most synergistic at the time, and itâs an extremely scary finisher when unblocked with that last activated ability.

Heroes' Bane â Hereâs the beast of Gigantoplasm combos, coming in with four of its own +1/+1 counters. (There are bigger options, but this oneâs quite efficient.) In addition, it has a variant of the Gigantoplasm power, letting it grow even bigger even faster and fitting quite well the theme of the deck.

Llanowar Elves â Weâd like to accelerate into the combo as quickly as possible. A turn-one Llanowar Elves will let us cast a turn-two Viridian Joiner, Plaxcaster Frogling, Phantom Nantuko, or Scourge of Skola Vale, setting us up for a turn-three Gigantoplasm and turn-four massive creature.

Bioshift â We may just have enough +1/+1 counters in this deck that itâll be worth tossing them around for huge swings and to avoid losing them to precision removalâyou know, when we donât have Plaxcaster Frogling around.

Pemmin's Aura and Prophet of Kruphix â These were already mentioned with the initial plan regarding Viridian Joiner and Gigantoplasm, but theyâll also work with Heroes' Bane, Phantom Nantuko, and Scourge of Skola Vale.

Llanowar Reborn â What I may have failed to mention regarding Plaxcaster Frogling is that graft will work great with putting that first counter on Viridian Joiner to set up the combo. The more boosting the better, and Llanowar Reborn can fulfill the same role.

So if you love plasms (Dracoplasm, anyone?), if you love gigantos (how about that Gigantomancer?), or if you just thought Prophet of Kruphix needed another application, give this deck a try.