In this experiment, we quicken our desperation for tentacles.

Well, I guess itâs time already. A bunch of mythic rares have been revealed from Oath of the Gatewatch, and Crush of Tentacles was previewed at the World Magic Cup. 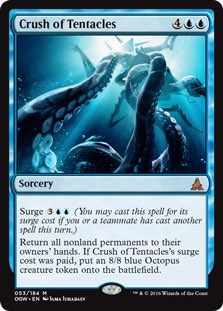 Giant octopodes, krakens, and squids are my kind of theme. (Have you seen the new League of Legends champion Illaoi?) So it stands to reason this card would jump out at me. Combine that with a mechanic that rewards me for casting spells previous to it, and Iâm totally on board.

Surge screams to me to be used in a Storm-like shellâif we cast a Ritual effect, we have a 1-mana discount from surge, and we are casting the spell earlier anyway because of the ritual. For example, on turn three, we could cast Seething Song into Manamorphose for

and then Crush of Tentacles. Thatâs a pretty early 8/8, and we bounce all our opponentsâ stuff at the same time!

Today, Iâm going to try to make a Modern deck using Crush of TentaclesâI donât play much competitive Constructed, so I wonât claim this will be strong at the next Modern Preliminary Pro Tour Qualifier, but itâs the kind of thing Iâd like to test out and see evolve if I were going to play Modern Friday Night Magic events.

Based on the core premise I just suggested, weâll need to start with Rituals.

Pyretic Ritual â This is the basic version of what weâre actually allowed to play in the format. We cast a spell and go up 1 net mana.

Desperate Ritual â This is the advanced version of Pyretic Ritual, though it came first. Splice means if we have two copies of Desperate Ritual, weâll effectively be able to cast one of them twice.

Manamorphose â I donât know if Manamorphose is generally considered a Ritual, as it doesnât actually increase mana-production, but it is nonetheless awesome. It can turn

for us to be able to cast Crush of Tentacles, and it draws a card to replace itself. Itâs generally better with Pyromancer Ascension around, but oh well.

Goblin Electromancer â I didnât include any of this in the list, but it might be worth considering. Iâm not sure what weâd cut, but it turns Pyretic Ritual and Desperate Ritual into red Dark Rituals.

Infernal Plunge â This is a red Dark Ritual if we have a creature around to sacrificeâI was considering running Khalni Garden just to fuel these, but it doesnât seem worth it.

Noble Hierarch â These did make the list, though theyâre certainly not Rituals. They wonât be a spell we cast before Crush of Tentacles, but they give us something to do early and help us ramp anyway. They would also be something to sacrifice in case you do try Infernal Plunge. The exalted ability, however, will be nice to have around to deal damage with the big Octopus, though weâll have to cast it after resolving the Crush since any Hierarchs on the battlefield will be returned to our hand when Crushing.

Search for Tomorrow â Before settling on the Ritual plan, I was looking at suspend spells for their ability to be cast for free in a turn we want to cast Crush of Tentacles and nothing else. For example, suspending Search for Tomorrow on turn two and playing a land every turn means weâll have five lands on turn fourâthe same turn we cast the Search off suspendâmeaning we can Crush that turn. Thatâs not quite as exciting as some of the other sequences this deck will allow, but itâs nice to know itâs possible. Rebound is another keyword worth looking at for this purpose.

Mana Seism â I threw these in the sideboard in case there are matchups in which we want to really go all-in. Iâm not sure this ever actually becomes worth itâitâs only as good as Pyretic Ritual when we have three lands to sacrifice, and it makes colorless mana instead of red. When we have four or five lands to sacrifice, it starts to look better, but that doesnât grant us much velocity considering weâll need to have reached turn three or four already anyway.

Plasm Capture â With a 1-mana accelerant (Search for Tomorrow or Noble Hierarch), we can cast this on turn three (or our opponentâs turn immediately after our turn three) to potentially add 3 or 4 mana to our turn four. Thatâs a pretty solid prospect, but I kept these in the sideboard to keep our main deck streamlined while allowing for potential Capturing against the right opponents.

So an 8/8 Octopus is pretty exciting. Unfortunately, if weâre putting all our tentacles in one basket, one creature that deals less than half our opponentâs life total per attack might not get the job done. Here are some cards that can help us out.

Crimson Wisps â When we wipe away our opponentâs whole board and then drop a giant Octopus, it would be nice to attack right away, considering there will be no blockers in our way. Crimson Wisps will allow us to do that as long as we work an extra

into the mana we can produce. In the early game, the Wisps will let us cycle it for a card as long as thereâs a creature around to targetâNoble Hierarch works, but an opponentâs creature will be a safer choice since the opponent will be less likely to kill his or her own creature in response to deny us the draw.

Quicken â We donât need Crimson Wisps and Quicken together, though they both help us get in surprise Octopus attacks, and they both can be cycled early. Quicken is nice because we can cast it and Crush at the end of our opponentâs turn and then attack on our turn immediately afterward, with all of our mana available for other spells.

Temur Battle Rage â And what would we use that mana for after Quickening? Giving the Octopus double strike and trample is greatâtrample might be superfluous if our opponent has no blockers, but we might need to trample over some things later, so it could make sense to not use the Battle Rage if itâs not lethal, opting to keep it around for trampling over replayed blockers. If our opponent took a couple Shocks from his or her own lands, however, the 16 damage will be sufficient. We can also play a Noble Hierarch or two, turning that double-striked damage from 16 to 18 or 20.

Mutavault â Iâm speculatively throwing a couple Mutavaults in here to help deal the final points of damageâeither before or after an Octopus attack. With a Quicken game plan, we should able to Temur Battle Rage the Octopus and attack with the Mutavault in the same follow-up turn for 18 damage. Keep in mind that the fact these provide colorless mana may mean theyâre not worth it in this deck.

Not of This World â For Octopus protection, we have a free spell that can defend a big creature. These can block up our hand early, and Iâd like to think we can finish off our opponent by surprise, but these might still be handy on occasion. I kept two in the sideboard against removal-heavy or control-based opponents. I considered Blazing Shoal to use with Not of This World and excess Crush of Tentacles, but I didnât want to make space for them and clog up the deck even more.

Slithermuse â This card really seems interesting for some of the dynamics of this deck. When we spend all our cards as rituals to make one 8/8 and bounce all our opponentâs stuff, itâs reasonable to assume weâll have far fewer cards remaining in our hand and will be trying to close out the game quicklyâwe might even need a Temur Battle Rage or Not of This World or something to close out the game quickly enough. If we had Slithermuse on the battlefield when we Crushed, the Elemental will leave play and potentially allow us to draw several cards. However, Iâm not sure enough this would be the case in many matchups, so I tossed them in the sideboard, which I treat more like a testing ground at this stage of deck-building.

, Quicken, Crush of Tentacles with surge

I suppose itâs also possibleâthough extremely unlikelyâto win on turn two on the draw against an opponent who dealt 2 or more damage to him or herself.

So if you think Kiora should join the Izzet, if you like the Greek-style pluralization of octopus, or if you just love sugary, lemon-lime soft drinks, give this deck a try.