Modern Masters 2015 Edition is in full swing. As we draft this set filled with powerhouse cards, I thought it only made sense to serve you a healthy portion of Okra-Twinkie-Tofu. Why? Obviously because it tastes so dang good!

For those of us who donât know, what is O-T-T?

As explained by both Matt and Doug before me, Okra-Twinkie-Tofu takes a look at some of the not-so-well-known words found gracing the faces of Magic cards, and it attempts to place them into one of three food types: 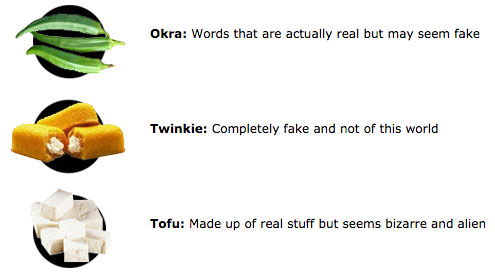 Modern Masters 2015 Edition is filled with glorious morsels of delicious Magic flavor, so itâs time to take a bite out of our new master set and enjoy the flavorful snacks:

Letâs kick things off with a very real word. An aeon (more often spelled eon) was originally defined to mean âlifeâ or âbeing,â and its use in Homer typically referred to life or a lifespan. Aeon can also be taken to mean an âage,â in the sense of a long period of time, forever, or eternity. I think the epithet of âthe Aeons Tornâ is a perfect fit for the largest Eldrazi titan for two reasons. First, as we were reminded in last weekâs Uncharted Realms, the Eldrazi are beings native to the Blind Eternities and without form, and they were trapped on Zendikar and forced into somewhat physical shapes. The juxtaposition in Emrakulâs epithet is jarring because one would not typically apply a physical description like being torn to a nonphysical entity such as an eternity. The idea that Emrakulâs presence causes time itself to be ripped apart is an alien concept that perfectly fits this strange race of creatures. Second, the Eldrazi as a whole have a somewhat Lovecraftian feel to them. The author of fantasy, horror, and science-fiction often employs strange words in his descriptions of incomprehensible horrors. The word aeon was among them, most famously used in the following quote: âThat is not dead which eternal lie, and with strange aeons even death may die.â

This oneâs totally and completely fake; Hurkyl is the name of the wife and former student of Drafna, the cofounder and leader of the college of Lat-Nam on Terisiare. Terisiare was the location of the Brothersâ War on the plane of Dominaria as well as the ancient home of the Thran Empire. Hurkyl famously died during Mishraâs attack on Terisia City after she vaporized three of Mishraâs dragon engines. So in case you were wondering what in the heck is happening in this cardâs art, now you know it is depicting the very spell Hurkyl used in an attempt to stave off Mishraâs dragon-engine attack. Magic has over twenty years of lore buried within the names and flavor text of each and every card. One thing I really enjoy about reprint sets like Modern Masters 2015 Edition is that they offer an opportunity for newer players to become exposed to these older stories. Of the many tales that took place on the plane of Dominaria, The Brothersâ War was by far my favorite. If you are interested in Magicâs past storylines and are looking for a good read, I encourage you to head out to your local used book storeâor click this handy linkâand pick up a copy of The Brothersâ War for yourself.

I know what you are thinking: âNo way is this word based in anything real; it has to be a Twinkie!â But hear me out. The beginning piece of the creatureâs name, qumulo sounds very similar to the word cumulus (pronounced kyo?omy?l?s), which is a word used to describe a type of cloud that forms as rounded masses that appear to pile on top of a relatively flat base at low altitudes. These are the clouds that are known for looking like puffy cotton balls, and they are the ones you watch lying on your back at a picnic, waiting for familiar shapes to form in them. I believe that Qumulox is a riff on the word cumulus, which is reinforced by the card's flavor text: âEven the clouds bend themselves to Memnarchâs will, eager to swallow those who oppose him.â So it appears that what we have here is a cloud monster who likes artifactsâa lot. Om nom nom.

This oneâs keeping it one hundred percent real. Inexorable is a crazy and cool Phyrexian-sounding word that means âimpossible to stop or prevent.â Take it from me: Sometimes, it can be hard to find the right word for a given card, especially if you want that word to perfectly encapsulate the mechanics of the card as well as the personality of whatever culture is being depicted in the art. The X in inexorable gives it a nice Phyrexian feel, while the definition falls perfectly into place as not only a great representation of what the card is doing, but of the Phyrexians themselves. The quote from Jin-Gitaxias helps to reinforce the idea from a slightly different angle, as though he were saying, âOf course we are unstoppable; it is almost as if this world were built for us to flourish here.â I mean, what was Karn thinking? Itâs sort of the equivalent of me building a house with a basement, keeping that basement constantly damp with zero light, and then being surprised when I find mold growing there. To be fair, Karn thought with the death of Yawgmoth the Phyrexian threat was ended, but stillâ.â.â.âDon't tempt the devil; am I right?

Thunderblust is strange in that it sounds like a real word but isnât. It might be due to the fact that if you replace the U in blust with an A, you have thunderblast, but I think the reason is that the word is a combination of the words thunder and bluster (or blustery). You all know what thunder is, I am sure, but the word bluster means âto talk in a loud, aggressive, or indignant way with little effect.â Blustery is a weather condition that is generally used to describe strong winds. The card Thunderblust is an Elemental that looks like a roiling storm cloud, so the thunder part makes sense, and you could say it probably causes some windy conditions, so blustery is also a fit. What I really like is that this card most likely does not have trample the first time you attack with it, creating a game state similar to the following:

Opponent: âI block with a 1/1 and take no damage.â

That game state feels very similar to a situation in which you are yelling aggressively to little effectâor blustering.

Novijen, Heart of Progress was the name of the guild hall in the first Ravnica block back in 2005. The word is as artificially created as the goo decorating the two pictured in its art. Those cytoplasts were a biomagical invention of the former Simic leader Momir Vig. Small masses of living tissue, the cytoplasts were able to transmit genetic information between other life forms that also had the goop on them. Visually, the globbies also provided an easy way to tell which of your cards had graft, which was the Simic keyword mechanic for the block. When project Kraj was initiated, the ooze monstrosity went out of control, absorbing all of the cytoplasts currently existing in the world, which was a lot. Kraj grew so large in fact, that the entire Novijen complex became his head. Eventually, Kraj would clash with Rakdos, the result of which would destroy the cytoplast goliath and put the demon lord into a coma until his inevitable return.

This word is totally real, and itâs used to describe the band of tissue on the lowest part of a horse's pastern, whichâas those horse enthusiasts and veterinarians out there will knowâis where the cells that produce a horseâs hoof are located. Neat! If we look at the card art, we can seeâ.â.â.âno horses. Wait a minute, whoops! Wrong definition, everyone. The word coronet has a second meaning, in that it can be used to describe a small or relatively simple crown, especially as worn by lesser royalty. Ah, yes, that fits what we were looking for much better; wouldnât you agree? Coronet comes from the Latin word corona, meaning âcrown,â which is from the ancient Greek ÎºÎ¿Ï?Î½Î· (kor?n?, âgarland, wreathâ). In the context of the Modern Masters 2015 Edition version of Daybreak Coronet, we see a common leonin wearing a crown of sunlight. If you compare this image to the art for Heliod, God of the Sun, we can see that the god, too, is wearing a crown.

Heliodâs crown is golden and reminiscent of the laurel wreaths worn by the ancient Greeks themselves. The golden crown adorning the leonin in Daybreak Coronet is much simpler, being the rising sun itselfâperfectly capturing the newly fostered mentality on Theros.

Velis Vel is actually a place, located on the painterly plane of Lorwyn. From the flavor text found on Runed Stalactite, Shimmering Grotto, and the famous Mutavault, we know that Velis Vel is a birthplace of changelings on the plane. Whenever a changeling on Lorwyn adopts the form of a creature that has yet to be taken by any other changeling, a special rune appears in Velis Vel to mark the event. We also learn that, each year, many changelings return to the place of their birth due to a rare event when sunlight is able to reach a hidden chamber within the caverns, creating a shimmering light effect. Velis Vel was also featured as one of the places you could planeswalk to during a Planechase game, and the location can have interesting effects on any tribes of creatures that happen to be visiting there. As Doug Beyer astutely pointed out in his review of the planes of Planechase, there exists an unspoken agreement between Planeswalkers to avoid summoning slivers within the shimmering caverns of Velis Vel.

The Necroskitter gets its name from the combination of two very real words. First is the prefix necro-, commonly used as a way to refer to anything having to do with death. The prefix itself stems from the ancient Greek nekros, meaning âcorpse.â Having to do with death and corpses matches the creatureâs wither ability as well as its ability to animate the dead in a form of necromancy. Skitter is a word that means âto move lightly and quickly or in a hurry,â and it comes from the word skite, which means to move rapidly. I can really appreciate the way this name paints a picture of the Necroskitter scurrying through the swamps of Shadowmoor, playing up the Elementalâs insectile appearance. I can imagine its stride, almost crablike, as it picks over the dead and dying or the plane, a train of animated corpses shambling in its wake as it skitters about in search of its next meal. Shivers! Creepy.

Thatâs all the time I have for today. I hope you enjoyed this installment of Okra-Twinkie-Tofu, and until next time, may all your experiences with Magic taste just as good.