Being a huge flavor goober and Vorthos, I often talk about designing both flavorful decks and cards as well as my belief that the game is far better off when we embrace the flavor as much as possible. While I am a Vorthos, and would do everything I could to make Magic the most flavorful game it could be, there are some pitfalls that I think designers and flavor goobers alike should be aware of when creating their cards. In today's article, I am going to take a look into what happens when an unflavorful design is actually the result of a flavorful one. Join me today as we go on a journey of perilous flavor.

Vorthosâs Side of the Coin

Alpha was the set that started it all, and it was the very first attempt to translate different fantasy tropes and ideas through in-game mechanics. Alpha has the gameâs first Angel, the first Dragon, its first Demon, and a slew of other fantasy mainstays that have been featured in almost every single set since. One extremely flavorful card from the days of Alpha was the mighty Sea Serpent. 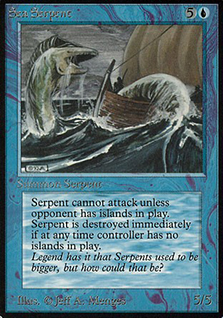 Laying the groundwork for iconic creatures and spells was something that Alpha excelled at, but as the game grew older and designers started to look back to the original set for inspiration, some of the flavor started to be misinterpreted through the cardâs mechanics. If we look at Sea Serpent, for example, it is a 5/5 for 6 in blue (a pretty efficient creature by Alphaâs standards). The drawback was that good olâ Sea Serpent could not attack unless the defending player controlled an Island. Why? Because it is based on the flavor that it doesn't have any legs. In order to reach the opponent, Sea Serpent needs some water to swim in.

Playing off of that idea, Sea Serpent has the second drawback âWhen you control no Islands, sacrifice Sea Serpentâ. What caused this second drawback? Well, again, this is based on flavor, playing up the idea that if you donât have any Islands surrounded by water for Sea Serpent to swim in, the poor creature is going to be beached and die. This line of thinking (while extremely flavorful) caused an unforeseen issue with every other design of a sea creature in early Magic. If Sea Serpent needed Islands to function, why wouldnât a shark, or a fish, or even a manta ray?

This line of thinking even led to a keyword mechanic called islandhome, which summed up the drawback into an easy-to-remember word. The downside to this was that this inherent drawback in sea creatures started to cause some gameplay issues for blue. As the color of mana that represented the element of water, a large portion of potential creatures for blue to explore seemed to be restricted by this idea that they would require water to be present in the form of Islands in order to survive being on the battlefield; however, all of blueâs sea creatures couldnât have this restriction tacked on to them if blue wanted to be able to enter the fray with the rest of the colors. Blue wants to be able to attack just as much as all the other colors! Why should blue be left out?

If you look over some of the earlier sets, you can start to see that one way R&D seemed to circumvent this idea was to replace sea creatures with Illusions that had flying and that just happened to resemble different sea creatures. Heck, some of the sea creatures weren't Illusions at all, they just swam through the air on their plane instead of water. Whatever, itâs fantasy; use your imagination!

The idea that sea creatures require water to live in and attack through initially led to an extremely flavorful and fun card, but the danger in that flavorful idea lied in the fact that it caused an unnecessary restriction to be placed on all other sea creatures. This overarching effect is a great example of an instance in which a top-down, flavorful design actually caused some harm for the game overall. When you are using flavor to inspire a design, it is important to consider the ramifications of that decision. Will the line of thinking that led you to that design cause you to impose restrictions on yourself for future designs? Will that hurt your game in the long run? These are some important questions to consider. In the cast of Sea Serpent, a creature was designed with mechanical drawbacks based on the creatureâs need to live in water in order to function and survive, creating a restriction on all other sea-dwelling creatures within the game.

Melvinâs Side of the Coin

Sea Serpentâs flavorful, top-down design created unwanted flavor driven pressure for each other sea creature design that followed it, and it is a great example of creating flavor that will âpaint you into a corner,â so to speak. While it is important to understand the flavor that you are designing and what impact that flavor will have over the future of your game, it is also important to understand the origins of your early designs and understand whether they were inspired by or based on some sort of flavor. Again, we can look to our friend the Sea Serpent as an example:

If you were to look at this card from a Melvin perspective, you would see a 5/5 for 6 in blue with a drawback. As long as you can build around that drawback, you have an efficient creature in a color that does not usually have large, efficient bodies.

Inside Antâs head as he wrote that last line: Straight up, Melvinâs line of thinking is super-boring. âEfficient 5/5 for 6 with a drawbackâ? Give me, âThis creature needs Islands because it will be beached and die if it doesnât have them,â any day. Much love, Vorthosâ.â.â.âMuch love.

In game terms, Sea Serpent started the whole large-blue-creature-with-a-drawback idea, and as we moved through the years, we started to see different riffs on this design. 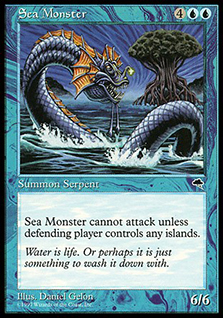 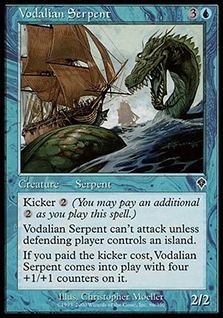 Tempest brought us a serpent that no longer required its controller to have Islands but that still could not attack unless the defending player had one. Invasion continued this idea with Vodalian Serpent. Both of these designs are a riff on the original, and they still make sense from a Vorthos perspective. After a few different spins on the original, we eventually arrived at this little bugger:

Ronom Serpent is identical mechanically to the original Sea Serpentâother than the fact that instead of requiring Islands, the card requires snow lands. For those of you who do not know, the Ice Age block was themed as a set taking place at a time when the world was under the effects of intense cold and ice, and that set brought us mechanics that played up this flavor. One of the mechanics featured in this block was the idea of frozen versions of the basic lands: 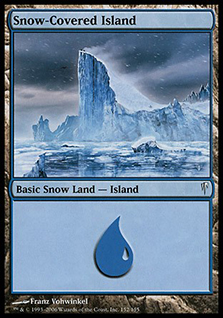 So, Ronom Serpentâs mechanics say, âOpponent needs a snow land or I cannot attack him or her; my controller needs a snow land or I die.â Mechanically, this creature plays very similarly to Sea Serpent. The flavor is where we start to see major differences because you and your opponent could also be playing any of these: 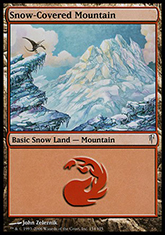 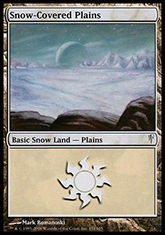 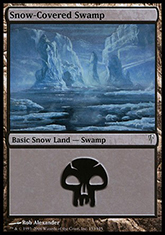 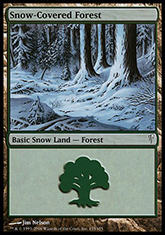 What is the flavor behind Ronom Serpent being able to attack a player controlling Snow-Covered Forests or the flavor behind being able to keep your serpent when all your Islands are destroyed but you still have a Snow-Covered Mountain? One could argue that the serpent is not a âSea Serpent,â but just a large, snakelike monster the mechanical restrictions of which are not based on the fact that it requires water to breathe (like its distant cousin, the Sea Serpent), but based on the fact that this is a creature that requires a frozen environment in order to survive. While this still somewhat makes sense from a Vorthos perspective, you can start to see where the flavorâmechanics relationship is beginning to break down. Shards of Alara brought us the next offender in the form of Steelclad Serpent.

Again, if we look at this card from a strictly Melvin perspective, we can see a large, blue creature for 6 with a drawback. In this instance, the drawback is that it requires you to control an artifact. What is not answered is why. Why does this creature require an artifact to attack, and what does requiring an artifact have to do with being a serpent? This is a great example of a card that is a mechanical riff on an old card (which is fine) but that is also trying to call back to that original cardâs flavor (which does not make sense). Mechanically, the original card was a large body with a drawback just like this card, but the original was a sea serpent not because it was a large body with a drawback, but because its drawback was flavored around living and surviving in water. Understanding the flavor behind designs is vital if you want to ensure that your game makes sense from a Vorthos perspective, and it will help to prevent breakdowns in the MelvinâVorthos relationship like Steelclad Serpent.

Zendikar brought us Shoal Serpent, and Scars of Mirrodin block had Scrapdiver Serpent and Spire Serpent. Born of the Gods has Floodtide Serpent. Every single one of these cards is mechanically the same thing. Each card is a large and efficient blue creatures with a drawback, and every one of them was created as a serpent for no other reason than to be a callback to the original large, blue creature with a drawback. Nothing in the mechanics on any of these cards paints the picture that these creatures should be serpents. If you were to look at any one of these cards as the very first Magic card you ever saw, the fact that these are sea serpents would be extremely confusing.

How does Scrapdiver Serpent swim through a single artifact? What does returning enchantments to my hand have to do with a sea monster? All of these cards are examples of how dangerous it can be from a Vorthos perspective to design a card and tie its flavor to mechanical identity and not original flavor. I cannot stress enough that Sea Serpent is not a serpent because it is a large, blue creature with a drawback. It is a serpent because its mechanics are based on a large sea creature. Remembering and understanding the flavor that originally inspired a mechanic is extremely important for designers and can help to prevent future breakdowns in the flavor of the game.

So now that Iâve written almost two thousand words about a single blue common from Alpha and its Vorthosian ramifications throughout the history of Magic, I think itâs time to stop. It may seem crazy, but I love this game, and I want to see it survive long enough for my future childrenâs future children to experience the Magic for themselves. So the next time you are designing your own Magic card set or working on any game inspired by real-world flavor, keep in mind two things: When you are creating a mechanic that is based on flavor, be cognizant of the ramifications designing for that flavor might have on your game. In my example above, creating a mechanic that represents a creatureâs need to live in and breathe water puts unwanted pressure on every other creature you create that also lives in and breathes water. Second, when you are designing a card that is a mechanical riff on an older card, make sure you fully understand the flavor behind the original card. In my example above, it is important to understand the difference between âan efficient 5/5 with a drawbackâ and âa sea creature that lives in and breathes water.â

May the flavor be with you.