It's been a long time since Unglued and Unhinged were released in 1998 and 2004. How many years exactly is impossible to say, but one thing is for certain: most Magic players have never played with an Un-card. That's no surprise â they're not legal in any Constructed format and drafting is near impossible given that booster boxes sell for well over $500.

For those who have played with them, their exposure tends to come from one of two formats: Commander and Cube, two of the greatest formats to ever begin with the letter âCâ. For those unfamiliar, Cube is a Limited format where instead of opening packs, players draft from a selection of cards as determined by the Cube designer. Most Cubes loosely follow formats such as Vintage, Legacy, Modern, Pauper, Single Plane (e.g. cards that take place on Ravnica) or Single Set (e.g. Rise of the Eldrazi). Nevertheless, Cube designers are an imaginative bunch who frequently stray from the confines of format legality.

Their out-of-the-booster-box thinking has meant that Un-set cards have found homes in Cubes from the very beginning:

The three most commonly used Un-cards, as per Cube Tutor

Cards like Ow, Carnivorous Death-Parrot, and Who/What/When/Where/Why are efficient and/or flexible Magic cards and are perfectly playable even if you ignore the bits of the card (âthat player says Owâ) that make them Un-cards. Booster Tutor in particular is a common inclusion in cubes larger than 360 cards â the minimum needed to support eight players â and honestly doesn't seem that out of place alongside modern-day Conspiracy âdraft mattersâ cards.

A new Un-set is upon us, and I, for one, am excited. Why is that? Because a few months ago, minor Magic celebrity Mark Rosewater made the following statements on his blog:

This is exciting news because although past Un-sets have had Cube gems, their funny and self-referential nature has for the most part kept them from seeing much in the way of Cube play. This isn't too surprising, as previous Un-sets predated the Cube format. News that Magic R&D kept Cube in mind for Unstable gives me hope that there will be a much larger variety of cards for Cube designers to choose from this time around.

Of course, you're not here for Cube history lessons, are you? No, you're here for the Unstable preview: 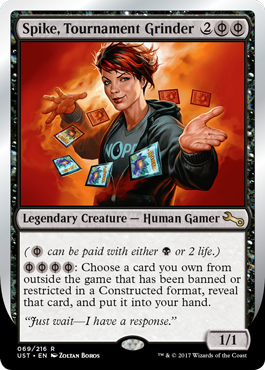 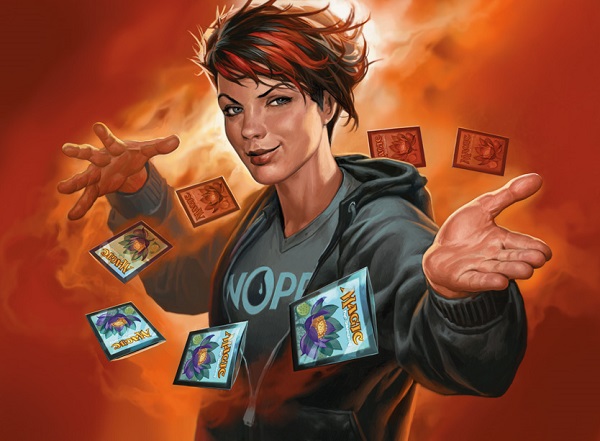 I'd buy a million of this shirt.

What â or who â is Spike? Spikes are one of the three main player psychographics, the other two whom have appeared in the previous Un-sets:

At 19 years, the longest amount of time it has taken for Wizards to complete a card cycle

Spikes are players who want to win. They love it. Relish it. Can't get enough of it. So, it should come as no surprise that Spike, Tournament Grinder is, well, the spikiest of the bunch. Her use of Phyrexian mana means that you can cast and activate her ability as early as turn two by spending a mere 12 life. And who needs life anyways? It's not like you lose the game by going to 0 life.

How Cube designers will deal with her ability is likely to vary widely. Some might have preselected banned cards kept alongside their tokens to speed up the searching process. With my 720 card Cube, I plan on allowing the person who activates her to have the joy of thumbing through the remaining 360 cards to find what most pleases them.

And what will they find in most Cubes? There are some great choices. In Vintage Cubes, I suspect we'll be seeing a lot of these suspects:

These cards have long been recognized for their reasonable power level

Even when you're not drawing three, Spike, Tournament Grinder always lets you grab the best card for the situation â as long as another player didn't draft it. Remember, it's banned or restricted in any Constructed format, so not only do you get access to cards banned in Vintage, Legacy, and Modern, but you also get access to cards banned in Commander, Pauper, and 1v1 Commander. It's a much broader list of cards than you would think. Feast your eyes upon these list of beauties getting tutored up in a Cube near you:

Did your opponent need those lands? That's gonna be a no.

And this list goes on and on and on. The fact that she is flexible, powerful and can tutor up an endless stream of perfect threats and answers turn after turn means I think we will be seeing a lot of Spike, Tournament Grinder in Vintage and Modern Cubes willing to dabble in the Un-world. If the rest of Unstable is as impressive as she is, I suspect we'll be seeing a lot more silver borders in our Cube futures.