Login
0 Item
Advanced Search
Sign In
Create Account
Unsanctioned cards have been revealed and I am losing my mind! I don't know anyone who is as excited about silver-bordered cards as I am, so to see all of them in their glory has made this past week a complete delight for me! I have been pouring over the cards enjoying the art, gags, and function of each of the cards! While I intend to go over the cards in Unsanctioned soon, this week I need to share a particular card and a deck that goes along with it.

Syr Cadian, Knight Owl is exactly what I am looking for in an Un- card. The art is just the right amount of awesome and outlandish. Who doesn't like a bird wearing armor carrying a sword? Who doesn't like the idea that the bird is awake all the time? Who doesn't love a name that that is a great play on words? Who is getting sick of my "who" puns?

What really draws me to building around Syr Cadian is the same as any other card: the text. Getting either vigilance or flying is solid for the 4/4 body. I would personally recommend using this deck more often at night. I'll take flying over vigilance in a game of Commander almost every time, especially on a 4/4 frame.

This is not the first time a silver-bordered card cared about what time of day you are playing Magic. My personal favorite before Syr Cadian was Elvish House Party. Watching your creature change from an 8/8 to a 9/9 in the middle of combat was a blast. Now, I'll need to be checking my phone to see what time the sun goes down to determine the full value of Syr Cadian!

While the options are cool, what I really like is Knightlifelink. It isn't just Syr Cadian that is getting the lifelink benefit, it is every knight you control. In the right deck, every creature that deals damage will be gaining you that much life. Add in that lifelink will give you even more life and you are sitting pretty!

I know there are those who poo-poo lifegain in Magic. They simply don't see it as being all that useful. I can understand that. Gaining one life here or there generally doesn't amount to much. When you are about to lose a game, gaining a couple of life usually isn't the deciding factor. However with Knightlifelink, we are into a whole different stratosphere of lifegain! Just three knights attacking could mean gaining 25% of your life total! And with every one of your creatures gaining you life, no one is going to attack you with a token attack. The risk that I could block with every creature on the battlefield and gain a huge pile of life is not worth the risk.

To make this happen, I'm going to need a deck. And as long as my commander is a silver-bordered card, I'm not going to hesitate to put other silver-bordered cards in as well! I do want to pause here to give some advice to those of you who are looking to add some of the fun Un- cards to your Commander decks. Please, please, please keep the social contract in mind. Un- cards are all sorts of crazy, and many of them can make your deck all kinds of broken. Losing to someone who combos you out with a broken set of cards is just no fun. Imagine how your opponent will feel if you do the same thing to them, but with cards that are technically not even legal in the format? They key to successfully bringing silver-bordered insanity to your games is understanding what is acceptable and what is not. Turning your library into a vanilla creature with power and toughness equal to the cards in the library is likely fine. Slapping a Rogue's Passage on it may not. There are plenty of cards that enable particular decks in certain ways that can wreck the game. Don't be that player. 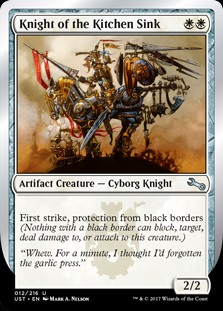 While I expect most of you have seen most of the cards in the deck before, I wanted to go through a few of the Un- cards that bring a little something to the deck.

Jackknight isn't really seeing its full potential in our deck. I don't have a contraption deck to go along with this deck, so it is never getting lifelink. However, with more than 15 artifacts in the deck, I do think it will regularly be a 3/3 or bigger.

Border Guardian is another artifact creature for the deck. There are only about ten or so silver-bordered cards in the deck, so it won't be too big, but it will be unblockable almost every turn. Will it ever get doublestrike? A few of the older artifacts could be white-bordered so I wouldn't give up hope! In this deck it could happen!

AWOL exiles an attacking creature. This isn't just a creature attacking you, but any attacking creature. It has great flexibility. While it doesn't cost only one White mana like two other options, it also doesn't give my opponent a free land or a handful of life. And in case you were wondering, there are some cards that allow you to get cards exiled from the game back. AWOL doesn't allow that to happen. Those creatures are gone!

The Chivalrous Chevalier was something of a surprise to me. I didn't remember this card, but getting a 3/3 flyer for five that lets me recast a creature with a great enter the battlefield effect sounds good to me. And if I don't want to do that, I just have to mind my manners in a way my mother would appreciate! "Your slacks accentuate your beautiful calves!"

GO TO JAIL is a lame version of Banishing Light. While it only costs one mana instead of three, your opponent has a one in six chance of getting their creature back every turn. The best use for GO TO JAIL is to treat the creature as gone until their opponent's next turn. This way, anything beyond that is a bonus! Practically speaking, the average creature will be out for just over three turns, which is a long time in most games. Also, while Banishing Light often gets destroyed at the worst time, GO TO JAIL doesn't. Players hate using their enchantment removal on something when they have a chance to roll and get it for free. What they forget is that if they wait until they roll, they are getting a creature back on their turn that probably doesn't have haste.

As far as the rest of the deck, there will need to be tuning. I'm not sure if there is nearly enough ramp or card draw or cards that give me an excuse to do ridiculous things. Once I get the cards together for it, I'll let you know!

Do you have any suggestions for the deck? Are there cards that just don't fit the theme like you think they should? While I can't include every knight, are there cards that fit the theme that should absolutely be included? I'd love to hear your thoughts and turn this deck into everything it could be. If I get enough responses, Owl follow up with another article featuring the changes and why!