I was perusing the Unsanctioned set recently (again) because it is coming out soon and silver-bordered cards are the best Magic cards ever, and I noticed something I hadn't noticed previously. Chicken a la King is back, and better than ever! And no, that is not just a turn of phrase, it really is better than ever. 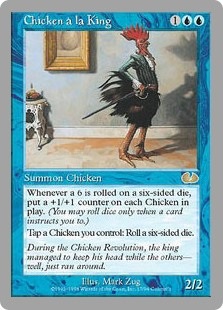 When Chicken a la King came out in Unglued, I was completely enamored by the card! A chicken dressed as a human! A picture of the King in his younger years on the wall! The play in the name! I loved it all!

I particularly loved the idea that it was a chicken lord. Giving +1/+1 counters to all chickens whenever I rolled a six appealed to me like nobody's business! And to roll a die, all I have to do is tap a chicken? Done and done! I'll look for some chickens in Magic and build a deck and it will be amazing... what do you mean the only chickens in Magic are in Unglued? And there are only four of them?

I built a five color chicken deck (because not including the Chicken Egg in Red seemed like such a fail. I had fun rolling dice and tapping poultry in plenty of games! I didn't win much because hey, slowly growing chickens aren't a threat at all, but I was having a good time and that was enough.

Then there was a contest. And I wrote some articles. And I won the contest! And Chicken a la King became one of the cards that I just love and have loved for a long time. So when I saw it was reprinted, I thought, "yay!" and moved on. I didn't actually look to deep at the card. I know Chicken a la King. But times have changed, the King has improved! 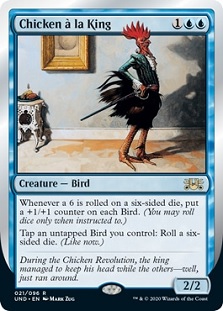 It isn't just chickens anymore! Now I can use him in a bird deck! All the hoops I used to jump through with changelings and others just to make a chicken deck with enough chickens to tap them to put counters on them. I used Morophon as a commander so I could build a Commander chicken deck! Now I don't have to do that! Birds are plentiful and will have me tapping every turn! While I admit there is a certain joy to having to jump through the hoops that are involved when dealing with a tiny tribe, it is time for Chicken a la King to shine! Here we go!

Right off I decided that Humming-, Strutting Turkey, and Teacher's Pet were out. I wasn't looking to build an augment deck here. This deck is for the birds, not bird alligators or bird ponies, or bird whatever. I then looked at the Green cards and decided they too could go. There were some cool cards there, but I figured I could keep this crazy in just two colors! In spite of the two color restriction, there are times when I will be playing this deck in the evening, and it will be a three color deck then. Normally, I wouldn't have included City of Ass in a two-color deck, but it allows some fixing, and provides Black mana when needed. Although if Black mana is pouring out of your (City of) Ass, I recommend seeking medical attention immediately.

Let's break down this deck a little bit to see what is going on.

The Bird is the word for this deck and I embraced it with 17 bird creatures in the deck. Four copies of the King makes, but why the Carnivorous Death-Parrot? First off, it flies and for a bird deck, there aren't many that do! I also like the casting cost as it will come out early on in most games. The real joy with the Death-Parrot is saying its flavor text. It distracts opponents from the real threat in the deck... oh right, there is no "real" threat in the deck! However, it is cheap and will be out there when the King is looking for birds to tap to roll dice.

The Mesa Chicken isn't quite as good as the Death-Parrot because it costs two White mana, so it will be a little more difficult to get out early. However, when there is a chance for me to stand up and cluck like a chicken just to give it flying, I'm all in! I expect that I might even just do it at the start of each opponent's turn, just to give it flying all the time. I might even do it when it already has flying, just because I can.

Clay Pigeon is in there because I happen to be unnaturally good at catching Magic cards. It involved a lot of practice. If you decide to add this to your decks, there are a few things you should know. Move away from the table before doing it. You don't want to accidentally smack your hand on the table. Be careful about the chair you are in. A lighter chair may collapse if you need to suddenly shift to make the catch. You really want to spin it hard. The trajectory is more predictable that way. You also want to have a throwing version and a playing version of the card. Understand that the throwing version could get crushed in your grip and will likely be trashed over a period of time. Keep one for throwing and the other for playing.

Flavor Judge is there to counter virtually anything your opponents do. At your next game think about how preposterous most game play situations are in Magic! Equipping anything to most creatures is silly. Even countering spells is ridiculous if you frame it the right way. Remember, this isn't a fair court. Your opponent isn't given a chance to rebut.

Krark's Other Thumb is an old favorite for me. It sits in my Ol' Buzzbark deck and just does work! It really ups the ante for this deck as well. When you tap a bird, you roll a six-sided die and get a counter when you roll a six. That gives you a one in six chance of getting the counter. These are not great odds and the deck generally tries to overcome this by playing more birds and getting more rolls.

Krark's Other Thumb lets you roll two dice instead of one and choose the result you want from those two rolls. There are 36 options when you roll two dice, and a six showing up on at least one die is 11/36. That is just over 30%. It is almost twice as good as rolling a single die! Unfortunately, playing two copies of Krark's Other Thumb is silly, since Krark only had two thumbs so you can't play a second one and further improve your odds. And it is also a legendary artifact, so that would be a waste. The card is so important to the deck though, I still included four copies. You really want this on the battlefield.

Lobe Lobber is in the deck so the die rolling isn't just about +1/+1 counters. Tap the bird equipped with the Lobber and do a damage to the player. Then roll the die to see if the bird untaps. The joy is Chicken a la King gives out the counters no matter the reason for the die roll, so if you roll a six doing the Lobber ability, everyone still gets the counter!

The removal for the deck is better than you would think with Fowl Play and Time Out. Fowl Play eliminates a lot of creature threats and at 3 mana is pretty reasonable. Time Out is pricey at 5 mana, but it is an instant that, at worst, puts a nonland permanent on its owner's library. At best, it could bury that card six cards deep into their library and give all your birds a +1/+1 counter. This is straight up removal, in Blue, at instant speed. I'll take it!

There is a lot of weirdness I like in silver-bordered land, but not knowing if I'm going to get mana from my ramp is something I don't want to deal with unless the payback is really good. The Mad Science Fair Project offers really good payback, and on theme! With the Project, you are getting the mana, you just aren't sure if it will be colored mana or not. I generally just tap it first to find out what I'm getting. The fact that it is another way for me to roll dice is just a massive bonus.

I particularly like that I can give the mana to another player if I want. If someone is looking to activate an ability or just needs the mana, you can throw a little help their way while scoring an extra die roll.

So everyone knows Storm Crow was the best card in the game until recently. Nothing stops a 1/2 flying crow! After years of dominance, Unstable finally printed a card better than Storm Crow. Crow Storm costs 3 mana and creates a 1/2 Bird creature token with flying named Storm Crow. The fact that it has Storm means that we can get multiple copies of Storm Crows from the one spell! Cast it and get three Storm Crows. Tap all three of them on your opponent's end step with Chicken a la King and Krark's Other Thumb and the odds have having at least one +1/+1 counter on the birds are really good.