I remember the first time I ever saw Vintage Magic being played. It was one of the first times that I showed up at a sanctioned event; there were some guys in the corner with awesome custom play mats and a ton of foil and altered cards. Being twelve years old and distracted by shiny things, I settled in to watch a game play out. My introduction to Magicâs oldest format was quick and brutal.

Twelve-year-old-Carlos had read enough about Magic to know that blue was the best color and to recognize that these must be good playersâbecause they were playing the best blue card: Force of Will. What I didnât know is that things like turn-one Tinker for Darksteel Colossus were possible. I was used to doing that with Tooth and Nail or Elvish Piperâthe fair way. That turn-one sequence destroyed my understanding of how Magic was supposed to work.

Imagine my surprise when it wasnât good enough to win. The way I looked at Magic changed when I saw that Darksteel Colossus beaten by a green enchantment and an onslaught of hasty Angels. Imagine how excited I am to share that the enchantment that changed my life that day is returning in Vintage Masters. 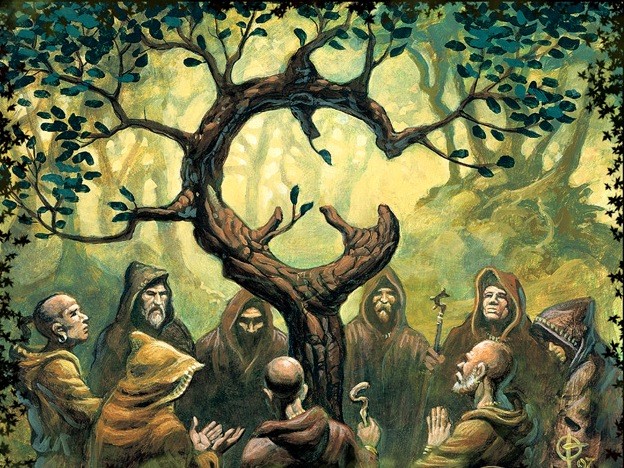 Oath of Druids has quite a resume in competitive Magic, playing critical roles in various Extended formats and being an archetype-defining card in Vintage for many years. Oath is among very few cards that have enabled combo decks, controls decks, and midrange decks alike, and it has been the backbone of a number of absolutely stellar decks. Today, I want to run down the evolution of Oath decks over the years, starting with some of the earliest applications I could find and going right up to contemporary Vintage. Letâs get started.

The first deck I want to look at dates all the way back to 2002, and it was piloted by none other than William âHueyâ Jensen at Grand Prix Houston. This list showcases a number of the themes youâll see throughout these various takes on Oath of Druids and is a fantastic place to start our journey. Letâs take a look.

In a format that was largely defined by people casting aggressive creatures such as Quirion Dryad and Jackal Pup, Oath of Druids was a way to cheat into the late game and crush those players with more powerful threats. Remember the days when Morphling was the best creature ever printed and it and Ancient Hydra were reasonable Oath of Druids targets? Not only is this duo absurd against creature decks, but Hydra can be recycled at will with Gaea's Blessings to give you inevitability.

On top of being able to play with one of the most powerful cards ever printed, this deck is also basically a Legacy deck. Brainstorm plus fetch lands? Daze? Force of Will? Check. Accumulated Knowledge has fallen out of favor, but it is still an awesome way to take advantage of both Oath of Druids and Intuition at the same time. Speaking of gaining more value out of Oath triggers, you can also just Oath up Roar of the Wurm against the more attrition-based matchups. Seems fair, right?

Later that year, the first Extended rotation happened. Oath decks lost cards like Force of Will and Gaea's Blessing in favor of shiny new toys from Odyssey and Onslaught blocks. There were a number of interesting Oath decks in this format, notably Brian Kiblerâs Oath of Beasts and Zvi Mowshowitzâs Turboland.

The next big evolution came with Justin Garyâs Turbo Oath deck. The plan is still the same. Counterspells, Oath, win. The difference is that Justin wasnât interested in playing a controlling role; he just wanted his opponents dead. It turns out that 10/10 Cognivores get the job done with time to spare before Oath of Druids mills you out. This approach of Oathing up creatures that were big enough to win in two combat steps would define Oath of Druids for many years, and it would set Cognivore as the new gold standard for win conditions in Oath strategies.

Shortly after, Oath of Druids rotated out of Extended and wasnât really heard from. Tendrils of Agony had been printed, and Vintage wasnât exactly the kind of creature-oriented format that was friendly to Oath of Druids. That all changed in 2004, when Champions of Kamigawa was printed. Forbidden Orchard changed everything. 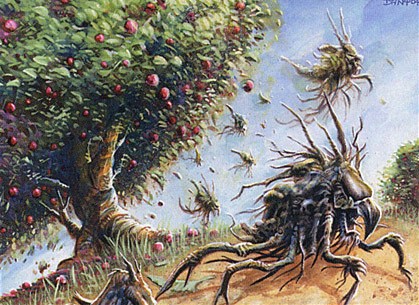 You mean youâre not playing creatures? Iâm feeling generous; have a Spirit token. I insist.

So Oath of Druids has broken onto the Vintage scene, teaming up with the most powerful cards in all of Magic. Even with access to the most powerful cards in the game, at its core, Oath is still a G/U deck that counters spells, draws cards, and cheats fatties into play. Weâve upgraded our countermagic and switched back to Gaea's Blessing over Krosan Reclamation, but very little has changed.

The most interesting part of Oath lists at the time was how the creature base shifted. Akroma plus Spirit of the Night was pretty standard, though some lists opted for Cognivore or Darksteel Colossus and Dragon Breath. Pristine Angel gave you an out to opposing Darksteel Colossus while Iridescent Angel and Platinum Angel were trumps for the mirror. Eventually, Razia, Boros Archangel was printed and became relatively standard since it allowed you to race Darksteel Colossus while still being relevant against tempo decks.

Eventually, black would be splashed for Skeletal Scrying and various tutors. Different Oath targets would fall in and out of favor. Cunning Wish would make appearances for bullets like Rebuild and Echoing Truth. These were superficial changes: small upgrades and metagame choices. Oath strategies were here to stay.

The next evolution of Oath began to change when Aaron Forsythe and Matt Place asked a very simple question. Why should it take multiple turns to win once youâve triggered Oath of Druids? Wouldnât it be better to win right away instead?

This simple question led to an innovative Oath variant that combined key components of multiple Vintage archetypes to become the hybrid comboâcontrol deck that has defined Oath decks ever since. This is the Storm Combo Oath Deck spawned by Wizards R&D.

So, as you can tell by the enormous pile of singletons, this is not a deck that is interested in playing fair. You have two plans with this deck. Plan A is to chain a bunch of artifact mana and cantrips into Yawgmoth's Will and Tendrils of Agony your opponent out. Plan B is to stick Oath of Druids, turn over your library, Eternal Witness into Yawgmoth's Will, and Tendrils of Agony your opponent out. Suddenly, you donât have to worry about Gaea's Blessing. You can play proactive disruption like Duress instead of countermagic. The deck basically becomes a U/B deck that plays all the best cards in Vintage and also is able to splash for just Oath of Druidsâthe other best card in Vintage.

To my knowledge, this exact shell never caught on. But it did change the way that people approached building Oath decks. The stakes had been upped. It wasnât enough to put Akroma into play. If you could trigger Oath once, you should be able to win the game. Fortunately, the Vintage community wouldnât have to wait very long for Tidespout Tyrant to revolutionize Oath all over again. Letâs look at Rich Shayâs take on Tidespout Oath:

So, whatâs changed? Tidespout Tyrant lets you do a couple of really interesting things. First and foremost, you can combo off with a few cheap artifacts for infinite mana and storm. That leads you into Brain Freeze for the combo kill. Merchant Scroll not only acts as redundant copies of Brain Freeze, but it enables your beat-down win condition as well.

If you canât just combo-kill your opponent, you should be able to chain together enough cantrips and Gushes to bounce the opponentâs board. Then, on your turn, youâll put another Tyrant into play and just bounce the opponentâs board every turn until you attack for lethal. Merchant Scroll enables this plan by finding additional Gushes or by letting you Chain of Vapor all of your Moxen back to your hand to bounce a few extra spells.

This is where Oath decks have evolved to in contemporary Vintage: comboâcontrol decks that either end the game after one Oath trigger or put themselves in a position of overwhelming advantage. Since then, GushBond Oath decks have become less popular, especially now that Time Vault plus Voltaic Key has been errataâd to be a functional infinite combo.

Weâve seen variants that play Tezzeret the Seeker as a backup plan to find both pieces of the combo, but most players stopped messing around with 5-mana sorceries when Avacyn Restored hit, thanks to everyoneâs favorite Yawgmoth's Bargain on a stick. 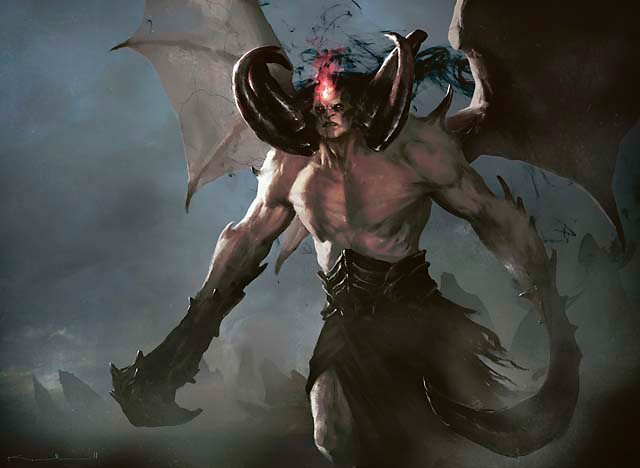 Griselbrand changed everything. The changes to this Griselbrand Oath deck by Brian Demars are subtle, but they may be the most significant changes weâve seen between any of these Oath variants.

Vintage changed a lot between the previous two lists. Four years will do that. Brainstorm, Ponder, and Merchant Scroll were all restricted. Time Vault plus Voltaic Key became a dominant force in the metagame. Phyrexian Metamorph made Mishra's Workshop more consistent and difficult to interact with. Mental Misstep redefined blue mirrors. Most importantly for this deck, Griselbrand happened.

What Griselbrand allows you to do is to activate Oath once and dig through up to fourteen cards to find either a Time Walk or a way to stitch together the Vault Key combo and just end the game. You need all of the cheap, interactive spells to make sure you make it to a point at which you can Oath in a Griselbrand and restock your hand with counterspells and Nature's Claims to buy yourself another turn.

But wouldnât it be better if you didnât have to worry about hitting seven lands off your Griselbrand draws? What if there were a simpler way to virtually guarantee victory off one Oath trigger? Of all the decks Iâve looked at, I think that Florian Kochâs take on Demon Oath accomplishes this the most elegantly and effectively.

So, whatâs the game plan? Rune-Scarred Demon tutors up Time Walk and nets you another Oath trigger. With the extra turn, you find another Demon and should be able to generate another Time Walk, either by finding the Vault Key combo, shuffling your Time Walk back in with Gaea's Blessing, or by comboing your Noxious Revival with one of many cantrips. If you can string two Time Walks together, youâve probably won the game.

To me, this seems to be the most powerful and efficient approach to building the Oath deck. Your creatures are powerful and threaten to end the game shortly. They are realistically castable off Mana Drains. A single Oath trigger either ends the game immediately or gives you an incredibly overwhelming advantage. You have just enough interaction to stay alive until you cantrip into and resolve an Oath of Druidsâand then the game is over.

Oath of Druids was printed in Exodus in 1998. That was sixteen years ago, and Oath is still among the most powerful, format-defining cards in Magicâs history. The sheer flexibility of Oath of Druids is what has made it a mainstay in so many formats and metagames. From gaining infinite life by recycling Spike Feeder with Gaea's Blessing to going infinite with Tidespout Tyrant, there is nothing Oath of Druids canât do.

With big creatures only becoming better and Vintage coming to Magic Online, Iâm excited to find out what the Oath of Druids decks of 2015 are going to look like. What will your Oath deck look like?